What’s a pirate’s favorite letter of the alphabet? Aaarrrrrrrrrrrrrrrrhhhhhhhhh!!!!! (I crack myself up way too easily).

So with that said, Dining by the Alphabet Letter R is in the books! There were plenty of options for Letter R with the most popular being Red Rock Canyon Grill. At first, I was tempted to go there but I’ve been there so many times and it probably would have been a biased review. It’s one of my favorite places in Wichita; possibly the best pork chops ever.

I wanted to go somewhere I’ve never been before and I went with the second most popular suggestion given by the readers through Facebook and Twitter. I bring to you Letter R…………….

Of the three locations, I was told to go to the West side location on West 13th street so that is where we went. FYI, there is a Buy 1 Get 1 free coupon on their website and DealSaver has a $20 gift certificate for $10. Not sure how long either of those last though. If you’re interested, go check that out soon.

My Special Guest Diner (notice that’s in all caps now like it’s a proper noun or something) was Samantha. She is a first time guest diner with Wichita By E.B. Along with Samantha; we were joined by two others who were going for their first time as well to Riverside Cafe. 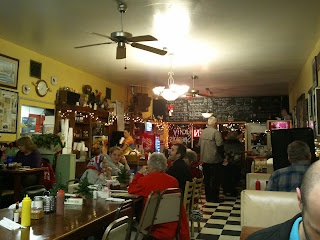 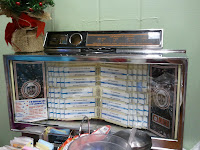 When we arrived, we were politely greeted and told we were welcome to sit anywhere we’d like. The decor inside had great character. Samantha said the place made it feel like a hometown cafe. They had all sorts of decorations on the wall, very busy but in a good way. All the booths had a little jukebox that played music. Ours got off to a great start with classics but then slowed down with too much slow romantic music.

Ummm yeah so when I unrolled my silverware this is what came out. I grabbed a new set.

For dinners, Samantha ordered the Steak and Shrimp combo (6 oz. dinner steak and 4 shrimp). Hers came with corn, baked potato, a roll and a side salad with ranch. I debated back and forth between the special which was a hamburger steak or the homemade meatloaf. I must interject that I absolutely love meatloaf. It’s quite possibly in my Top 5 favorite home cooked meal; actually getting hungry right now just thinking about it. In the end, I went with the homemade meatloaf smothered in gravy. It came with a baked potato, green beans, a roll and a side salad with raspberry vinaigrette (definitely needed spell checker on that word!). The salads came out right away and it was like any side salad you’d find at a small diner or bar. Little bowl, side of dressing and not many toppings. Not terrible, Not great. 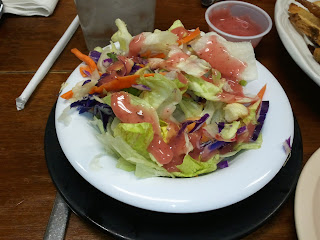 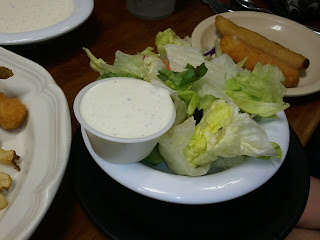 Food came out in good time and it was chow down time. 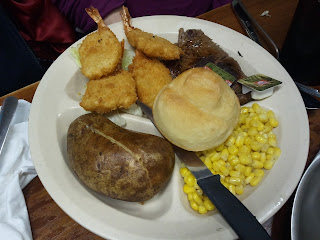 Samantha was straight to the point. She wasn’t a big fan of the steak and shrimp. She compared it to lunch served in the cafeteria of a middle school. She said her steak did not have much flavor. The corn and baked potato weren’t anything to write home about. The shrimp was big and actually pretty good though. The appetizers unfortunately were the best part of the meal for Samantha. She was upset she didn’t go with her gut and order off the breakfast menu that is served all day.

Now it was my turn to dig into the homemade meatloaf. (First off, how is it homemade? Was it made at home and brought to Riverside Cafe? Because if it was made at Riverside Cafe could it technically be called homemade meatloaf and not restaurant made meatloaf?) I first tried the baked potato and it was like any other potato. The green beans were good. The roll was decent. Then the moment of truth as I bit into the meatloaf. Yeah…… can’t say I was a big fan. I took another bite to verify and my initial reaction was right. I think it might have been the gravy or something. It tasted very salty. I was kind of upset by it all and only ate half of it so not to waste a lot of food. I should have went with my gut and ordered the hamburger steak. One of my friends told me a long time ago, “Never order meatloaf at a restaurant.” He might be right. I just wasn’t impressed with my meal and Samantha had the same sentiment.

The other two in the group ordered a steak and shrimp meal which he thought was kind of tough. The other was a chicken fried chicken meal with mashed potatoes which she liked a lot. I actually had some bites of the chicken fried chicken; I should have ordered that instead. It wasn’t too bad.

I’ve heard many good things about Riverside Cafe and think it would have been best served to go with the breakfast menu. They were busy when we arrived. They obviously have many loyal patrons that frequent the place. This possibly could have been an experience where we just ordered the wrong thing, I don’t know.

The service was pretty good. Our server did her best to be friendly and taking care of any request we had. Samantha thought it was a little much at times but I suppose it all depends on the person.

The price is all right on. Anywhere from $5-12 for most dinner meals. The breakfast menu was all extremely affordable especially if you use their Buy 1 Get 1 free coupon.

The total for Samantha’s meal, mine and the appetizer ran $28 not including tip or the use of any coupons. You can easily eat there for much less, probably in the $7-10 range for two people.

In rating the place, Samantha wasn’t impressed and was a bit disappointed by it all. I definitely had the same sentiment. On the Super Scientific Scale, Samantha gave Riverside Cafe a 2. I think with a different meal it could have been better, I liked the service and ambience of it all but was disappointed still. But with the whole experience I had to rate the place given what I went through. My final rating? A 3. Service was good, value was excellent, ambience was excellent but the food was subpar. That gives Riverside Cafe a final rating of 2.5 (out of 5).

If any of you decide to go to Riverside Cafe, give the breakfast menu a try. I’d love to hear your thoughts on this. I’m sure there are plenty of people that will disagree with the review given but it is what it is.

Up next is Letter S where I bet there are plenty of suggestions for.

0 thoughts on “Dining by the Alphabet: Riverside Cafe”