The week before Christmas weekend and I wanted to knock out yet another Dining by the Alphabet Letter (yes Microsoft Word, that is a fragment and I don’t care). This time it was Letter S. There were plenty of suggestions of decide from: Such staples as Sumo and Scotch and Sirloin (how’s that for alliteration!). I decided against those two because of their popularity especially on the East side of town. Many people have been to them.

I then narrowed down my list to two places. One of them was Savutes but since they are closed on Monday’s, we went to our other option. 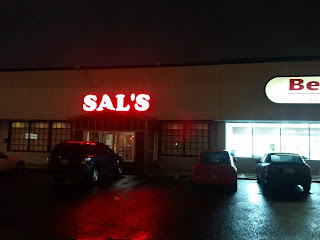 This is located on the south side of Kellogg just east of Woodlawn. It’s next to a bed shop right off the Kellogg frontage road.

Sal’s Japanese Steakhouse is mainly known for their hibachi grill similar to Kobe’s and Sumo’s. I’d say it’s probably one of the less popular ones in Wichita. So why not give it a try?

My guest diner for tonight was Melisa. This was her first time being a guest diner. She brought her husband and three children (two, Maggie and Ivie, who decided they would help me in rating this place!). Ivie and Maggie even brought paper and markers to write their notes down. Two others joined us to fill up the hibachi grill and watch the excitement.

We made reservations Monday evening but in reality they were not needed. The place wasn’t busy at all so we were seated once our entire party arrived. Our server was quick to bring us out waters once we sat and we don’t recall ever having to wait for my water to be refilled.

Throughout the dinner, many “Sumo” comparisons were made especially by two of the girls as that has been the only hibachi grill they’ve been to. Even when the cook was out, they would say out loud, “This is just like Sumo!”. I wonder what was going through the cook’s head while they were saying it!

In short time, miso soup came out. I wonder if miso is short for “i love MI SOme soup” cause I do. The miso soup according to Melisa was more flavorful than other places. I seconded the opinion as did some others at the table. Once it was apparent we were finished with our miso soup, our server then brought us the salad with ginger dressing. If you like ginger dressing, you won’t be upset here. This is just as good as other places I’ve been to that offer it like Sumo or Ah-So.

Next up, our cook came out. He looked friendly and gave everybody a warm hello. He did his little pregame performance and made sure he verified everybody’s meal. One thing everybody noticed was he was very good with the kids. He never looked annoyed with the kids asking him questions and took it all in stride and tried to make sure they enjoyed it all. Nice touch. 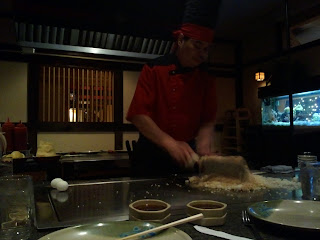 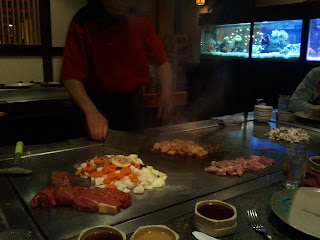 We did the whole shrimp catching and only person, I believe, caught it on the first time. Shrimp catching is when the cook tosses shrimp into the air and you try to catch it in your mouth. I missed mine and it was totally because I lost the shrimp in the light. He threw it directly where a light bulb was facing me so I was blinded. I was set up to fail! After the kids saw me miss, I felt like less of a man. 🙁

Our cook did all the tricks like flipping bowls into his hat, the onion volcano, tossing shakers in the air and catching it. It’s always entertaining if you go to hibachi grills in moderation.

We were eating as the show was being put on and getting full as time went by with all the fried rice, cooked veggies, onions, shrimp, etc. A couple people at the table noticed that their little vegetable medley included carrots and potatoes. It’s something that was new to us and wasn’t bad at all. Melisa loved the fact that they used less garlic in their rice allowing for more flavors to come through other than being overwhelmed like you were preparing for a vampire attack.

Melisa and I each had our steaks cooked spicy. Melisa had to ask since she wasn’t sure if she saw it on the menu. She said the chef was precise in preparing it spicy without trying to kill her. She’s had it at Sumo before where it is so hot, she cannot eat it. She did mention that it was better than Sumo’s since there was seems to be a lot of fat on her meat there. My filet mignon was cooked medium rare and it was delicious. Each bite was very tender and flavorful; by far my favorite part of the meal.

After dinner, they gave everybody little bowls of sherbet. The kids liked it a lot. 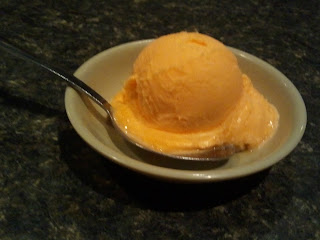 For their service, they did everything they were supposed to. Melisa liked how the server slipped in to clear plates and bowls without disturbing us or letting them sit and pile up. Her water was never empty either. As for the cook, he interacted very well with the kids and even giving her two year old pretty much everything they ordered for free. Other places, charge a plate fee or a special charge. They did not at Sal’s. I have zero complaints about their service and was happy with everything.

For price, I think some people were kind of expecting it to be a little cheaper than the competition. After browsing around, I noticed that prices between all the hibachi grills in Wichita are about the same with minimal differences in price. Melisa spent $63 without tip for her family of five while I spent $24 without tip. I think both prices included an 8 person gratuity charge. The kid’s meals ran $9.95 in case some of you parents are wondering. She mentioned had the meals been $3-5 cheaper, it would have been exceptional on value.

The atmosphere was nice and quiet. Having it not be busy, probably added to that. But even if it was, the place has a calm demeanor to it compared to the east side hibachi grill. Melisa gave extra points for the atmosphere. Being able to carry on a conversation with friends at a table is important and Sal’s is conducive for that. I thought the atmosphere was pleasant and didn’t put off a pretentious vibe to it. It’s a little dark inside but it seems to be that way at most hibachi grills.

It must be mentioned that one person at the table did not like their meal. He said the steak was tough and he would not go again. So take that for what it’s worth. Personally I had no problems with the meal at all and loved every bite of it. I did give him a bite of my filet and he enjoyed it much more than what he had.

Overall Sal’s is a good place to go with friends or a group of people. It’s a good alternative to other hibachi grills that may be busy and I don’t think it’s one of those places you feel like you have to get all dressed up for.

I promise that is their handwriting even though it looks similar to mine. Maggie thought the service was fast, the food was very yummy, the soup was sweet, the chef was hilarious, and the water was spilly (because she spilled it on herself). Ivie thought the steak was good and the cook was funny funny. Let me repeat, not just funny but double funny and to end it all, the service was fast.

As for the adult review: For price, Melisa was hoping they would be a little more competitive on price and rated it a 3 noting that taking kids can get expensive. She enjoyed the food and gave it a 4. She mentioned if her stomach had made it, she’d give it a perfect score. She thought the service was perfect. On the Wichita By EB scale, they went back and forth between a 4.5 and 4 and finally went with a firm 4. My sentiments were pretty similar outside of the kids because frankly I don’t have kids and don’t plan on that anytime soon! My final score for Sal’s Japanese Steakhouse was a four. So that puts the final Super Scientific Scale rating at a 4 (out of 5)!

I want to thank Melisa and the family for joining me in Dining by the Alphabet. It was a great and entertaining time.

P.S. – When I got in my car to drive home, there was no one in it but me. As I’m driving, I hear a little girl’s voice in the very back. I look back and see no one. It freaked me out! Then I realized I still had toys from Christmas shopping over the weekend. Crisis averted!

Up next is Letter T! The 20th letter of the alphabet! Anybody have suggestions?

2 thoughts on “Dining by the Alphabet: Sal’s Japanese Steakhouse (CLOSED)”