Anyhow, after the Shockers win on Senior Day, a group of six of us decided to stop by a local pizza joint for dinner and drinks. The place? Ziggy’s Pizza.

Ziggy’s Pizza was opened by two brothers Ryan and Jamie Verbeckmoes. Both avid Wichita State fans, so they automatically received plus points from me. It’s located in Clifton Square near Douglas and Hillside. It’s in the old Bay Leaf Cafe. Yeah….I’m thinking Ziggy’s is a much better option for that building than Bay Leaf.

Upon entering, we were greeted warmly by their servers. Just looking around, the best word to probably describe the insides was “quaint”. It was the first word that popped up in my head. After referring to the handy dictionary.com, I was given such definitions as old-fashioned attractiveness or charm, cleverly made, unusual in an interesting, pleasing or amusing way. Ziggy’s certainly doesn’t look like your average pizza place in Wichita. It has a warming and home-like appeal to it. It definitely fits the College Hill mold. There’s also a party room that seats 8 in the back if you’re ever interested. 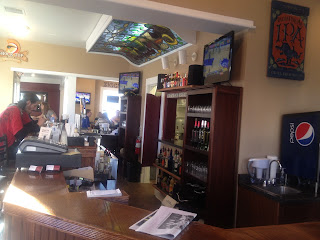 We all had a few drinks to go along with their meals. For you beer connoisseurs, they had Bud Light, Shock Top, Fat Tire, Odell IPA and an assortment of other offerings not on tap. To start off with appetizers, we had garlic bread and cheesy garlic bread. I was told their loaded nachos were excellent but as is the story all the time, loaded nachos equal a loaded stomach for me. No cheese please.

The garlic bread was excellent. Cooked just right and much better with their marinara sauce. 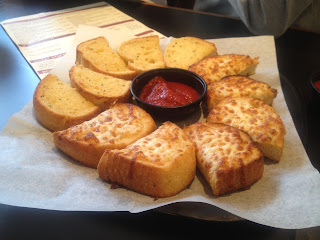 Next up was dinner time. We glanced through the menu. Their sandwiches I didn’t look over much but noticed their clever names like “Cluck Norris”, “Parmageddon”, and “Ham Dunk”. I love plays on words. They give me a good laugh. I’ve always wanted to create a sushi roll with eel and call it “Eel Magnolias”.

We decided to pass on the sandwiches and all order three different pizzas. One of the gentlemen in our group is a picky eater and only eats what he wants, so we went with the “Meet Me at Ziggy’s” pizza to satisfy him. (Pepperoni, Italian sausage, smoked bacon, ground beef, Canadian bacon and marinara). With many people in the group a fan of pizza tacos, we ordered the “Mamacita’s Taco Pizza” (A thin layer of refried beans, topped with ground beef, onion, cheddar, lettuce, tomato and Doritos). Yes that read Doritos. It’s all sprinkled across very lightly. Then for the third, we asked the owners which one they suggested. Without hesitation, we were told “White Delight” (Grilled chicken, smoked bacon, green peppers and red onions on cream cheese, side of marinara). I guess pizzas with cream cheese are popular in Lawrence and Manhattan where one of the brothers went to school. All the specialty pizzas run $10.99 except for the “Cheese Johnson” (nice WSU reference by the way).

The difference between Ziggy’s and other places is that their pizzas are made in rectangular form and slices cut into squares. It didn’t take too long for our pizzas to come out.

Five of the six in the group each had at least one slice of each different pizza. And wouldn’t you believe it; no single pizza was chosen more than twice as their favorite. Two people liked the “Meat Me” the most, two chose the “White Delight” and the final person chose the “Taco Pizza”. The “Meat Me” was the favorite of the three I tried. It’s your typical meat lover’s pizza which I never even order in the first place. I was asked by another person if I ate the crust because I’m notorious for throwing them away. I did eat my crust. The dough they use for their pizza I think is what stood out most for me. It really made the different. As for my thoughts on the “White Delight”, it was ok on the first couple bites but the cream cheese through me off and really overpowered every other flavor the pizza had. I think it’s because I NEVER eat cream cheese because every single other person commented how they could barely taste the cream cheese and loved the pizza. So take that for what it’s worth. The Taco Pizza was really good especially with the salsa on top. A suggestion I had along with others was to possibly melt the cheese a little on top. Not a single person at the table mentioned disliking their pizza and each had a favorite go to pizza for their next slice. One person commented how they loved the sauce on their pizza. Another discussed how no pizza had an overwhelming flavor stick out to make them hate the pizza. Overall, Ziggy’s was very well received.

Usually when I go to pizza places with groups of others and order an assortment of pizzas, one pizza will stick out as the overwhelming favorite amongst the group. Such was not the case with Ziggy’s; everybody had their own favorites. I’d be really interested in going back to try their sandwiches which I’ve heard good things about and some of their other specialty pizzas.

One thing our server forgot to tell us was “You pay for your tab at the register.” We kind of sat that waiting on our ticket before we had to ask. All the quirks of a new restaurant! I will for sure be back soon to see if the quality and service remain the same level as some restaurants in Wichita seem to lose ground at over time. The owners are very active and hands-on in their restaurant so that’s a good sign.

I’d definitely recommend Ziggy’s to you all. Give it a try and see what you think about it for yourselves. I know I will be back soon!