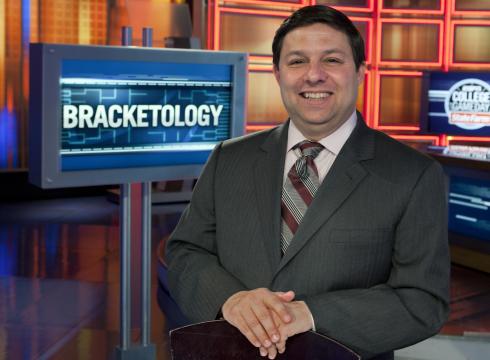 First I would like to thank everybody who showed up to our first charity event at Il Vicino! Il Vicino had over $16,000 in food sales because of our readers which raised over $300 for charity. This on top of other events will put us close to $1,000 in funds raised for Heather’s Camp, the Galesburg Relief Fund and The Nathan Tenclay Memorial Scholarship.

I’ve been out of town on the road following the Shockers in Omaha and Cleveland for the NCAA Tournament but would like to now post my interview up with none other than Joe Lunardi. This took place after the KU game.

For those that are not familiar with Joe Lunardi, he is an ESPN College Basketball analyst. He is also the resident bracketologist for ESPN which millions of people read during the course of the season.

I had the opportunity to ask him some questions regarding Wichita State basketball, bracketology, the NCAA Tournament, among other things.

So I now bring you the world exclusive interview with Joe Lunardi: The Wichita Version:


Eddy: Joe, first of all I would like to thank you for taking time out of your busy schedule to take time out of your extremely busy schedule to talk with me about bracketology, Wichita State and also just get more visibility to this blog. We’ve recently had our first charity event to create awareness for our Charity Dining Event at Il Vicino to support Heather’s Camp, Galesburg Relief Fund and the Nathan Tenclay Memorial Scholarship.

Probably 100% of my readers (and I say that loosely, I’m not sure I should even be pluralizing reader) are from Wichita. The most important question everybody wants to know is, “Even though rankings don’t apply to the seeding process, how does a Top 15 team in the nation, Wichita State, deserve a 7 seed and if so, what caused that? Is there some bias against the Missouri Valley?”

Joe Lunardi: In general, this is a bracket (w/seeding) dominated by the so-called Power 5 conferences.  Like it or not (and I don’t), the greatest “overseeding” took place among power teams while the most overt “underseeding” came with next-tier conferences such as the Missouri Valley, Atlantic 10 and American.  Historical data supports the completely opposite approach, but the Committee’s pendulum swung back this year toward power conferences getting what I would call a borderline unhealthy benefit of the doubt.

Eddy: Did ticket sales or storylines take place, in your opinion, of the scheduling of Wichita State and Kansas in the same pod?

Joe Lunardi: No, and this is one of the greatest myths with respect to the seeding and pairing of NCAA teams.  Anyone who has ever tried to build a bracket following all of the published principles and procedures would tell you it’s too difficult (and also unnecessary) to “script” match ups.  They happen naturally across the 67 games of the tournament.

Eddy: In speaking with one of my friends, he had a question he really wanted an answer to. Should the committee make their selection and seeding criteria public before the season starts and be held accountable for sticking to their criteria? Being fans of a school that is not in one of the power conferences, we feel there is a slight against the so called “mid-majors” even though recent history shows there is nothing “mid-major” about Wichita State.

Joe Lunardi: Such an approach would not necessarily benefit teams outside the power conferences, as an adjustment of criteria to fit individual team circumstances can (and should) theoretically benefit everyone under evaluation.  We need something more like a “sliding scale” of criteria, as not all teams/conferences come from an equal starting point.  To use a baseball analogy, it isn’t fair to second basemen to compare them using the same criteria applied to, say, left fielders.  Expectations and circumstances can and do vary widely.

Eddy: Besides a team like UCLA, what was your biggest surprise of the selection committee’s at-large bids?

Joe Lunardi: I made a mistake in not including Indiana, not so much because the Hoosiers clearly deserved to get in (they didn’t), but because I went with what I would have done instead of projected what the Committee was likely to do.  It was a mistake because I’ve been doing this long enough to know better.  Probably too much time in the bunker…

Eddy: Let’s revisit 2014. What happened with Midwest Region? It was a pretty loaded region looking back on it. Did the committee have it out for Wichita State’s schedule that year?

Joe Lunardi: Another myth, which, unfortunately for Wichita fans, is easily debunked.  When examining the true seed list from last season, the Midwest Region was not out of balance in any serious way.  One can argue the Committee did a poor job in evaluating and eventually seeding teams like Kentucky, but there was and is no such “out to get” tactics by the Committee.  The process is also too closely scrutinized anymore for those types of shenanigans.

Eddy: Kentucky or the Field? What do you take?

Joe Lunardi: Was a “field” guy all year long.  Changed my mind when it appeared Kentucky’s offense caught up with its defense.

Eddy: For someone who watches a lot of basketball, would you mind helping our readers fill out their brackets? What big upsets or possible Cinderella Sweet 16 teams do you see happening?

Joe Lunardi: You do know that I stink at that part of the job, right?!?

Eddy: When it gets closer to March, everybody is always talking Bracketology and checking out your page on ESPN to see the latest predictions. How did you get your start in Bracketology? And would you like to finally clear the air with many people that your predictions are based on what you think the committee will choose instead of what you want to happen?

Joe Lunardi: I’ve been working as a sportswriter and basketball publisher almost since graduating college 30+ years ago.  The NCAA tournament has always been my favorite annual sporting event, so I suppose it’s natural for me to want to be involved with it.  Certainly the explosion of cable television and the Internet has created a far greater need an opportunity for so-called “niche” content, and I was fortunate to be in the right place at the right time.  As for the second question, except when I screw up (see Indiana explanation above), I view my role as forecast what the Committee would do (not me…).

Joe Lunardi: The Palestra (longstanding bias), along with Phog Allen, old MacArthur Court (Oregon), Cameron Indoor and Pauley Pavillion.  The latter because I got to play pick-up there and later met both Coach Wooden and Kareen Abdul Jabbar.

Eddy: What would it take for you to be my guest and come down to Wichita one of these years to try out some of our great dining establishments and visit one of the best arenas in the Nation, Charles Koch Arena, during a game?

Eddy: Joe, I would like to thank you again. It was a pleasure discussing sports with you.

1 thought on “An Exclusive Interview with Joe Lunardi”