I’d like to welcome you all to the next installment of a regular blog feature we have here called Must Try Menu Item; a blog entry where I essentially tell you what to order at any particular establishment. This time, we head to The Store. Read on folks……………..

There’s an annual event at Botanica called Blooms, Brews, and Bloody Mary’s. It’s a event that allows you to see Botanica, listen to live music, sip on some beer and vote for your favorite bloody mary from restaurants and bars in the city.

This year’s winner was a little south side bar called The Store. It’s located at 3210 E Osie street which is near the southeast corner of Harry and Hillside; a little bar tucked away behind the Dog N Shake near that intersection.

After a round of golf at Clapp Golf Course, a few buddies and I decided it could be a worthwhile stop to see whether a little bar on the south side of town was worthy of enough of being crowned winner of Best Bloody Mary.

The Store is a nice little quaint bar that seats roughly 60 people, has comfortable seating inside, a pool table, dart board, a coupe TV’s and a beautiful patio outside. I’ll even mention that the bathrooms were extremely clean. But all that wasn’t the point of our visit. We immediately walked up to the bar, mentioned we heard they were the winners of Best Bloody Mary and would like to order four………. along with a round of jello shots for the entire bar. They were only a dollar that day so it just made sense to be generous that afternoon.

Soon after, this is what we received for a $5 per drink investment, not including all the jello shots of course: 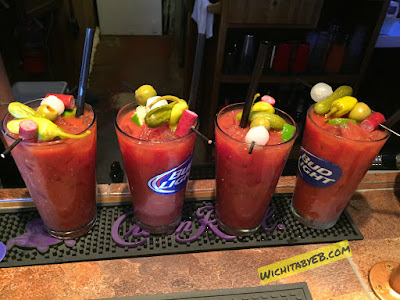 It all looked good but did it taste good? We would find out very soon. First sip in and there was a really good flavor to it. One of the first things we all noticed was there isn’t much of a bite to it. It’s not a spicy bloody mary if you’re into that. One of my friends who’s a big fan of spicy bloody mary’s said he liked it but wished it was spicier. Yet he was also the one who downed his the fastest and was quick to order another one……..then another one.

There was a unique flavor, one that was still good. The owner there said she used a spice called Cavendar’s which could have been the reason for the unique flavor. It wasn’t too tomato-ey (I feel like I’ve been using that description a lot lately) and it wasn’t too strong on the vodka. It was a good mix in between that was done just right.

Another friend of mine called it the best bloody mary he has ever had; that’s very high praise from him considering he’s a huge fan of bloody mary’s. A third friend said he really liked his as well and was another recipient of two more additional bloody mary’s after drinking his so quick.

I shared the same sentiment as the first friend I mentioned. I like a little bite to my bloody mary’s and this doesn’t have much of one but the flavor is still there which is good. I had two before I just needed to switch drinks and get something different. I don’t want to take anything away from the bloody mary; it was very good and something I’d come back for again. To be honest, I’m not sure who I’d vote for best bloody mary. I just may have to attend the Blooms, Brews and Bloody Mary event next year and vote myself.

The garnishes on the drinks are always a nice addition and doesn’t do much to take away from the drink. It’s a good amount and not overdone.

Overall one person thought it was the best bloody mary in town. One person loved it and the remaining two really liked it. It was well worth our visit and having a very friendly group of patrons and staff was just the cherry on top.

The Store’s Bloody Mary is totally worth this entry’s featured Must Try Menu Item.

Otherwise, I hope this helps you all out.