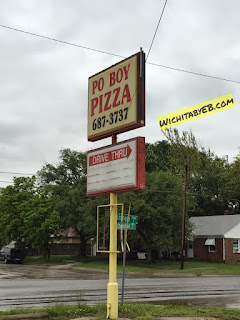 For 25 years, Po Boy Pizza has been loyal patrons and Southeast high school students. From sandwiches to pizzas to pizza rolls, they have long been considered a little secret on the south side of town.

I’ve had a handful of people telling me I need to go here and finally…….finally made it out to 5619 E Lincoln which is near the southeast corner of Oliver and Lincoln, across the street from N&J Cafe. I’ve actually driven by here multiple times recently but every time I’m in the area, they are closed. They are open from 10 am – 7 pm Monday – Saturday and closed on Sunday.

That sounded simple enough. I asked him which pizza roll was his favorite off of the menu and he immediately responded, “Supreme, brother!” (editor’s note: I repeat, he isn’t my actual brother). 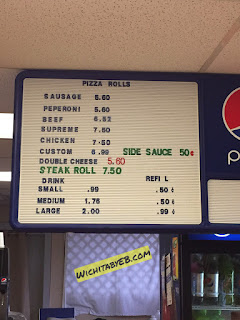 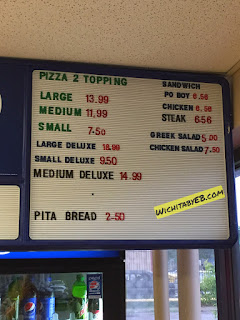 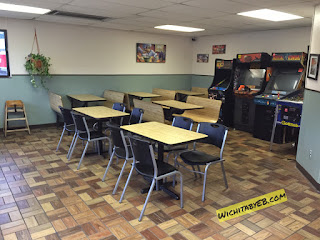 So glancing at the menu, it only made sense to order a Supreme Pizza roll. We asked what else we should order and we went with the employees suggestions. To go along with it we ordered a Steak Pizza Roll and a Pepperoni Pizza Roll. Now when I envisioned pizza rolls, I thought they would be similar to the pizza rolls I grew up with in college that you would by at Dillons and pop in the microwave for a minute and 30 seconds.

When our food was ready, I was completely wrong. The pizza rolls at Po Boy look almost like flatbread sandwiches that are pressed down or two crusts of pizzas laid face to face. Plus these things are big. Measuring anywhere from 14-16 inches long, I think the idea of splitting three Pizza Rolls between two people might have been a hard task to achieve in finishing. I would have a better shot of completing another 200 mile Ragnar Race than downing three Pizza Rolls.

Each of the Pizza Rolls came with a little ramekin cup of some homemade pizza sauce. I tore off a piece of the roll to dip in…….Wow…..I could drink their pizza sauce. It’s that good. In fact, had I been eating dinner by myself I probably would have drank the sauce. 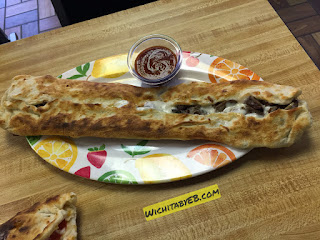 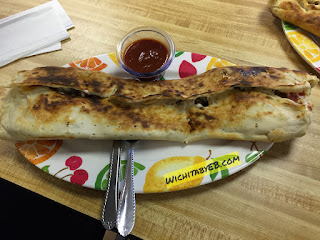 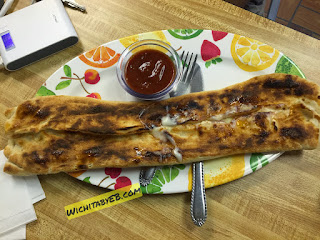 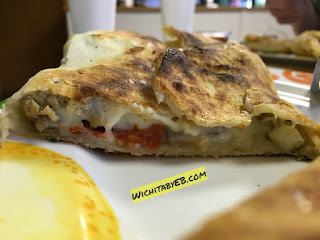 Now on to the pizza roll. The first word that comes to my mind is cheesy. Fortunately I took a lactose pill before eating but these pizza rolls were loaded with cheese. Even my friend noted that there was more cheese than anything else. At times, the taste of the cheese overtook any toppings in the Supreme Pizza Roll. In the Pepperoni Roll, you could barely taste the pepperonis.

If you like cheese and I know a lot of you out there do, You will probably really love the pizza rolls here. Don’t order more than one; one is plenty.

Of the three pizza rolls, my favorite was the Supreme followed by the Pepperoni followed by the Steak. Since I’m not a big fan of cheese, I wish they put more toppings inside the rolls and were lighter on the cheese. If I go again, I may request less cheese in mine. My friend was a bit on the indifferent side. He wasn’t a big fan of it but he didn’t hate it. If he lived closer to Po Boy Pizza, he would possibly go again. I wanted to really like it but I just never had that “a-ha” moment while eating the pizza rolls outside of the pizza sauce which I’ll probably go back and order. I’m thinking it might make for an odd but intriguing bloody mary mix.

Would I go again? It’s possible but I’d have to order something different or ask for extra toppings or something along those lines.

The lady and her son who work there were nice and accommodated any requests we had and answered any questions I threw at them.

If you go during the day, they have plenty three arcade machines and one pinball machine. I love me some pinball. 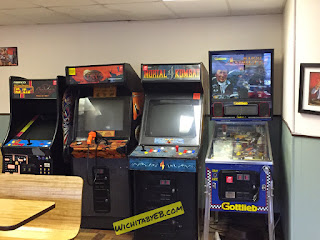 Have you been before? Are you one of the people that just swear by Po Boy Pizza? Let me know.

….and as always Happy Dining.