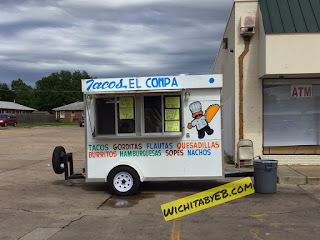 Tacos El Compa is a tiny little food truck that is parked at the northeast corner of Lincoln and Woodlawn five days a week from Wednesday to Sunday – 5pm to 10pm. If you’re unsure if they are still there at the time, you can give them a call at 316-265-4006. 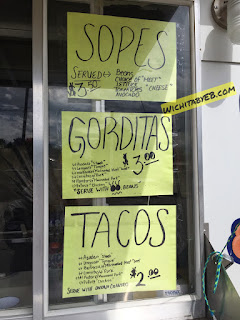 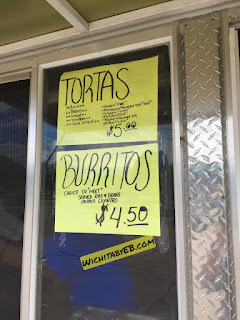 Their menu consists of sopes, gorditas, tacos, tortas and burritos. I randomly happened to see it driving by and quickly pulled in to see if anybody was actually inside the truck and with my good luck, there was!
When I arrived, there was a nice older gentleman and his daughter working the truck inside. The older gentleman originally took my order but his daughter had to confirm everything as I believe the gentleman, her father, and the main cook spoke a little broken English. All good, as long as he could make a mean taco, I was happy. 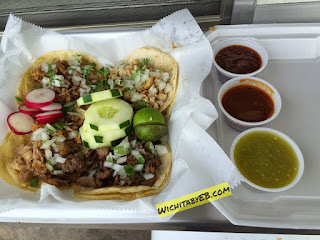 I ordered a 2 pork, 1 chicken and 1 beef taco and they gave me each of the three sauces they had available. Those options were mild, medium and hot. For four tacos and a bottled water, it rang up as $9 not including tip.
It was a little messy eating them because the tacos were so stuffed that toppings and salsa would fall out. I ended up getting some on my shirt because I eat like a baby and apparently need to wear a bib.
Of the three tacos, the chicken was my favorite. Just the quality and seasoning of the chicken served my stomach well; very delicious. The pork was my second favorite. Not as good as other pork street tacos I’ve had else where but good enough to satisfy me. Coming in last was the steak. The meat just didn’t taste that good and could have done without it.
Between the three salsas, the mild was my favorite. I usually prefer sauces with a bite and kick but the mild just had a great aftertaste to it. The medium was ok and the hot sauce wasn’t really hot nor flavorful. Not sure what it was all made with as my palate isn’t trained to distinguish every single ingredient in something but it was just too thick and was missing something I just can’t explain.

If you go, give all three salsas a try and see what you think and definitely order at least the chicken taco. Since it’s not incredibly far, I plan on going back to try something else off the menu and do a followup.

My mind wasn’t blown away by Tacos El Compa but it met enough expectations for me that I would go again.