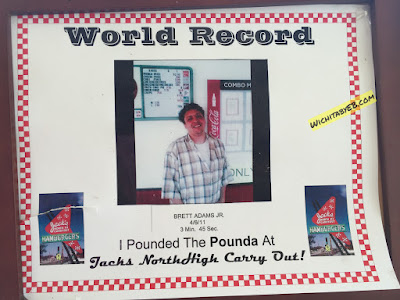 There’s a World Record for a burger challenge at a local burger joint, Jack’s North Hi Carryout. It’s called “The Pounda”. It consists of a pound of fries and a full pound burger with cheese.

The “World Record” is 3 minutes and 45 seconds by a gentleman named Brett Adams Jr. It’s a very impressive feat and an incredible time for a burger that is four quarter pound patties and a full pound of fries.

I love a good food challenge and always try to talk my friends into doing them or joining me. Food challenges that require speed like the Six Million Dollar Burger Challenge (covered here) are not my thing though. I can do consumption of some pretty crazy things but when you add in time that’s where it gets rough.

For those unfamiliar with Jack’s North Hi Carryout, they are at 603 W 13th Street directly across North High School. They have a simple menu of burgers, hot dogs and fries and take cash only. They have been around FORRRRR…….EVER!!!! Jack’s has a really good following and draws a great crowd at lunch time especially with the high school kids on their lunch hour.

So back to the Burger Challenge. This Brett Adams Jr. guy has held the record since 2011 and it’s time for his record to go down.

Since I’m in the middle of this Best Wichita Burger Project, the last thing I need to be doing is a burger challenge but being the competitive person I am, I wanted to see this record go down. I assembled a super team of eaters I thought would stand a chance at taking down Brett Adams Jr.

Through the power of peer pressure, I was able to talk three friends into attempting the challenge.

Damon – Quick burger eater. He’s been to a couple burger restaurants with me like Jack’s Coffee Shop. I’ve seen him put down a pound burger literally within minutes without trying.

Robert – Quickest beer drinker I know. He can put down 12 ounces like a college student can take a a regular shot. I think the beer to burger transition for the challenge would come with ease.

Ricky – Long time veteran of helping me review restaurants on many occasions. His claim to fame is winning a steak competition. He ate a 32 ounce ribeye, baked potato, dinner roll and full bottle of red wine in 14 minutes and 32 seconds; a record that still stands today.

Surely, this super team I assembled could finish a pound burger and a pound of fries in 3 minutes and 45 seconds. The only rule I was given was “Not a big production” meaning I couldn’t take video. We arrived and placed the order. It’s $10 for the Pounda Challenge but free if you beat the record. 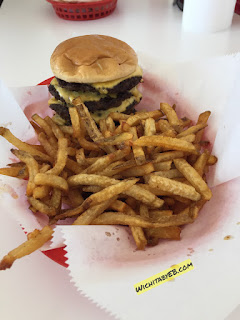 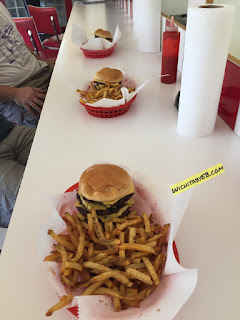 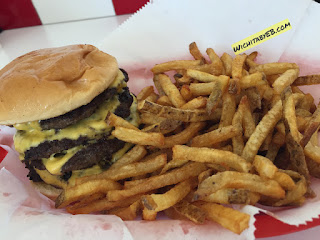 Everything was made to order and fresh off the grill. When it arrived, it was still very hot so the guys sat for a while waiting for it to cool down. The last thing they wanted was to burn their throats with piping hot meat and fries. So we sat there and there was debate when it was cool enough to eat. Ricky was adamant about starting but Robert and Damon kept mentioning how hot it still was. Being the Voice of Good Reason, I said to wait. After a while, they still went back and forth on how warm it was but not wanting to wait any longer, they decided to begin.

I was allowed to be the timekeeper for the challenge and told the guys when every 30 second block of time hit.

Within the first 30 seconds, the guys mentioned how hot the burger still was going down the throat. Today, Ricky learned that patience is truly a virtue.

One minute in and Damon already had 2 of the four patties down, Robert was closing in on his second patty and Ricky was coming in the rear with maybe a fifth of the burger eaten.

1:30 mark, Damon was making good progress on his third and fourth patty. Robert was just a smidge behind him. Ricky was………………..sweating.

2 minute mark. Damon was just about done with his third and fourth patty. Robert was falling a bit behind. Ricky………………..quit and ate his burger at a more relaxing pace.

2:30 mark. Damon was finished with his burger and started working on the fries. Everybody at Jack’s could see the finish coming. Robert was just about done with his burger. Ricky…………….ate two fries and smiled.

3 minute mark. Damon had half of his fries left. I was pushing and cheering him on. I felt like Jeff Probst from Survivor telling him to dig down deep and find it in him to finish this. Robert was finally done with his burger but knew by then he couldn’t finish. Ricky……………..was looking up probably wondering what his girlfriend was up to.

3:30 mark. Damon had possibly three handfuls of fries left and just 15 seconds to go. At this point I would countdown second by second. The end was near, it would come down to the wire whether he would take down Brett Adams Jr.. Robert and Ricky had their eyes on Damon. Everybody in the building had their eyes on him. Damon’s dream of being a Food Celebrity were coming close.

3:35 mark. Just ten seconds left. There were probably two handfuls of fries left. We were pushing him hard. He commented, he could barely swallow the fries. His mouth was probably dry from all the starch.

3:40 mark. FIVE SECONDS LEFT and just a bunch of small little fries left on his platter. He was having a hard time putting more food into his mouth.

Damon just missed the mark. He finished well under 4 minutes but missed the record. The owner said that was the closest he’s seen anyone to breaking the record.

Just look at how close Damon was………. 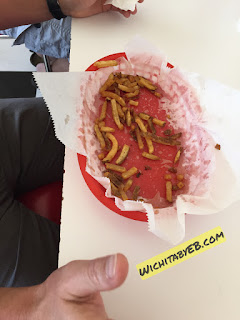 Then here are Robert and Ricky’s finishes in their respective order: 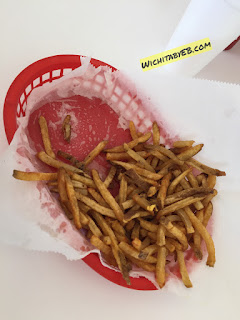 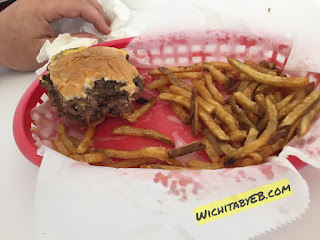 Afterwards, Damon and Robert mentioned how hot the burger still was and it was tough in the first couple minutes having it go down because of the heat. Everybody felt fine immediately after; nobody was incredibly sick. All the guys talked about how good the burger was. Ricky’s been before but it was Damon and Robert’s first time there and they thoroughly enjoyed the burger in the two minutes they had it.

Hours later, I would text them all to see how they were doing. Robert said he felt perfect and could do it again tomorrow. Damon said he was fine. This record could very likely go down and will if we have any say about this.

We plan on going back in a couple weeks to go toe to toe with Brett Adams Jr. and take the record down. And when I say we, I mean my super team of eaters.

Although my friends failed on the first try to be the new World Record holder of the Pounda Challenge, that doesn’t mean they won’t stop. Life is full of second chances and soon, we will be back at Jack’s North Hi Carryout to give the challenge another attempt. Watch out Brett Adams Jr……you’re going down.