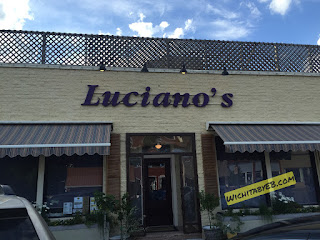 When it comes to restaurants that many of my friends talk about with a majority of them never actually having gone to, it’s Luciano’s Restaurant; an authentic Italian restaurant out of Mulvane, KS.

I will be starting a sister blog called MulvaneByEB.com and this will be the very first entry into the new blog. In all seriousness, how many restaurants are actually located in Mulvane not including any one inside the Casino?
Luciano’s Restaurant is located at 216 W Main St and are open Monday, Wednesday – Saturday 11 am – 9 pm and Sunday 11 am – 8 pm. They are closed on Tuesdays. I would strongly encourage making reservations as it can definitely be busy on the weekends……from what I’m told.
Their website is: http://www.restaurantlucianos.com/that has their menu, reservations, pictures, etc. The menu I saw was different than the one posted online, so I have a different one posted at the bottom.
The place was larger than what I had imagined. There are different sections in the restaurant but it definitely has a small town feel to the place; charming would be a good word to use here.
On the weekends, you can order the Chef’s Menu which is $40 and included 5 courses. The Chef was too busy to let our server know if there were any left so the six of us who went resorted to ordering off of the menu. 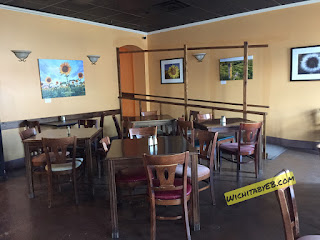 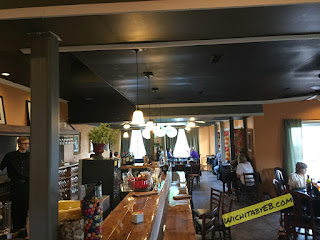 Of the six of us who went, none had been to Luciano’s previously. We were excited to try this long discussed restaurant.
As with most group dinner blogs, it only made sense to order every single appetizer on the menu. Everybody sampled a bit of all the appetizers and when the dust cleared, the favorite of the four we tried was either the Carpaccio Tonnato (thinly sliced, choice grade, beef filet served raw, topped with a tuna sauce) or the Antipasta Misti di Parma (mozzarella cheese, prosciutto from Parma, Italy, served with Kalamata Olives, Olive Oil and Salt). Depending on who you asked, it was between those two. If you are a calamari fan which I am, you may like the Calamari al Vino Bianco (sliced calamari served over greens mixed with herbs and spices). Unlike many calamari appetizers you see, this was not fried. As one friend put it, it had a lot of flavor and was nice and light. Coming in last by comparison was the Caprese (fresh Mozzarella, Tomato, Olive Oil, Herbs and Spices). 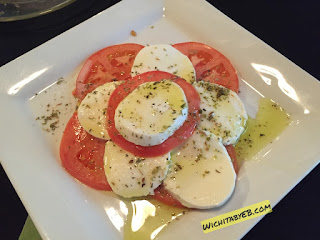 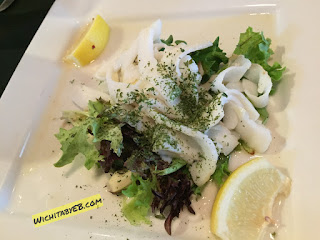 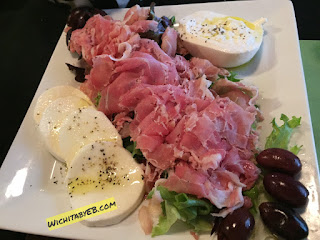 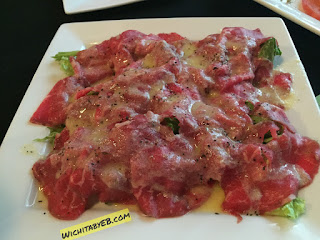 Overall it was a good start to our meal. While looking at the rest of the menu, they had a mix of creative Italian dishes all with really cool names that made me sound refined trying to pronounce each item. A part of me wished I was in Italy so I could order in my Italian accent while getting dirty looks from the locals thinking I’m mocking them when in reality, I’m just trying to fit in and be cool. It never works.
Everybody ordered a half portion of salad except for one person who ordered a full which came in their signature cheese bowls as seen below. 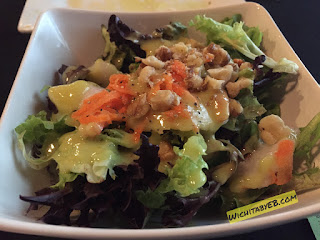 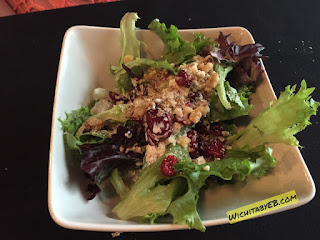 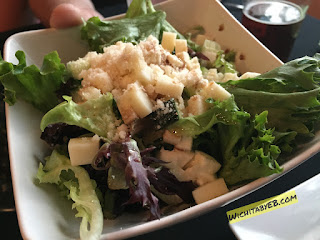 For the next course, my friends ordered the Pasta Con Salsiccia (pieces of Italian Sausage mixed with carrot, spring onions, tomato, cream, and parmesan cheese blended with Fettucine pasta) and the Mottola Sugo di Carne (family recipe for Meat Sauce cooked for four hours served over Penne Pasta and sprinkled with parmesan cheese).
Those who ordered the Mottola Sugo di Carne, including me, really liked the pasta. The sauce really made it. We had a discussion at the table about pastas, how they were boring, how anybody could make pastas at home but what really makes the pasta is the sauce. Luciano’s, in my opinion, hit a homerun with their sauce on the pasta.
Two friends had ordered the Pasta Con Salsiccia and it wasn’t as well received. Both commented how the pasta lacked enough sauce (essentially no sauce) and the chunks of sausage were very small; had the look of bacon bits. One friend stated she was sure the way it came was the authentic way. She wasn’t a fan of how many carrots were in it as it took away from the pasta and she’s even a fan of carrots. 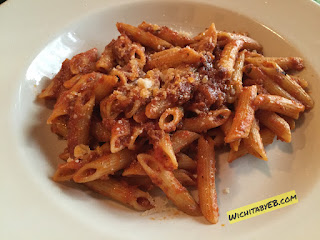 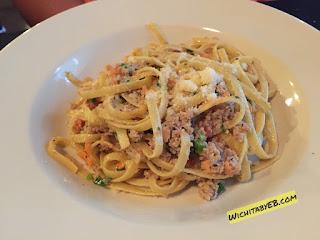 A few of us felt frisky and decided to order a fourth course. One friend ordered the Salmone alla Griglia (grilled salmon served over tomatoes paired with potatoes) and two of us ordered the Filleto el Pepe Verde (choice grade, Angus certified 5 oz Beef Fillet sautéed in a Brandy, Green Pepperscorn, and mushroom cream sauce served medium rare).
My friend who ordered the salmon thought it was just average and a little overcooked. But her husband ordered the filet and thought it was really good, well cooked, interesting and unique. Her husband texted me the next day and said it was perfectly cooked and melted in your mouth. I’m a carnivore and love a good steak and Luciano’s did a fantastic job with the filet. It was so tender. The marketing taglines “It melts in your mouth, not in your hands” came to mind. The sauce was very creamy and tasted good but I knew I would be in trouble later. I even took four lactose pills going into dinner. I couldn’t decide what I liked more the pasta or the filet. Both were tremendous. I was anticipating it so much, I forgot to even take a picture so the one shown was “borrowed” from their Facebook page. 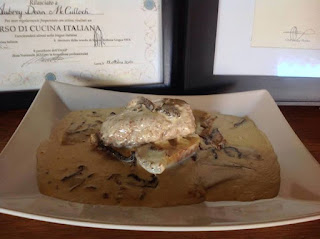 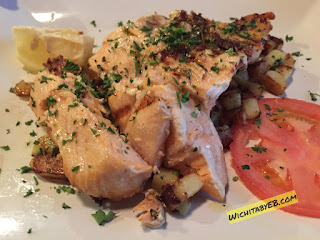 Final thoughts on Luciano’s were mixed. If you live in Wichita, mainly on the north side of town, it can be a good 30+ minute drive. Those who are natives to the city know that’s a long drive. Of course people from the big city think that’s nothing. Based off of discussions at the table, I’d say that 3 of the 6 (yours truly included) really liked it while the remaining three weren’t as impressed and thought it was average to alright.
Most mentioned it’s not a place they would go to often given the distance and other options around Wichita. I liked it and if I went again would want to try the Chef’s Menu as would a few others. One of my friends who loved it said, it reminded her of Italy; simple flavorful preparations, but not overdone like Olive Garden.
People say it’s the best Italian you can get; that’s all very subjective. I can see this being a place that people will either REALLY love or think is alright but not worth the hype. I don’t think this is a place anybody would really hate. The food is still good even though it can be a little costly. You could spend $20 there for a couple items off of the menu or be a pig and spend $60 and order every course possible like me. Then another $30 in gas to make it back to Wichita……….ok maybe that’s a little dramatic.
The service was fantastic, the wait on the food wasn’t long, it’s all a matter whether you like the food there and are willing to drive out to Mulvane and pay the price. It’s a unique atmosphere and one everybody would enjoy.

It should be noted, they have great beer and wine prices too. That is something two friends mentioned multiple times.

If you haven’t been, it’s definitely something everybody should try at least once. It took me forever to finally make the trip out to Mulvane. I’m a fan but given the distance not sure how often I’ll be going back.
Happy Dining!
Don’t forget to Like Us on Facebook! 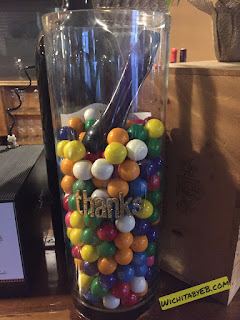 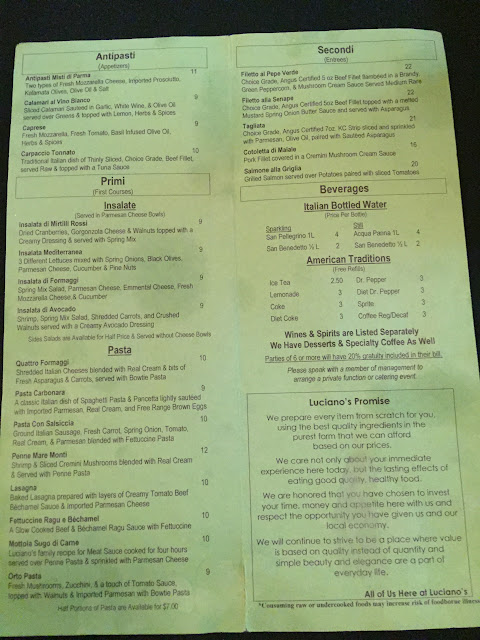