Sometimes you just need to treat yourself to a dessert. That was the case on a random Thursday afternoon when some coworkers and I figured why not go out, buy a ton of cupcakes and just gorge on them.

Our destination was Smallcakes: A Cupcakery located at 8338 E 21st St N in the Shops at Tallgrass. They have been around now for two years in Wichita. It’s a locally owned franchise with many locations around the nation.

Their website is for all locations so if you want information on the locally owned establishment in Wichita, head over to their Facebook Page. On their Facebook page, you can find out deals they have going on throughout the week, special cupcakes they have on certain days and more. 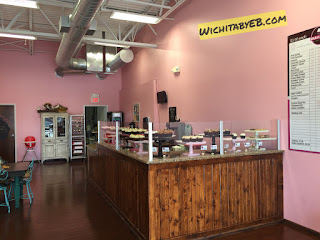 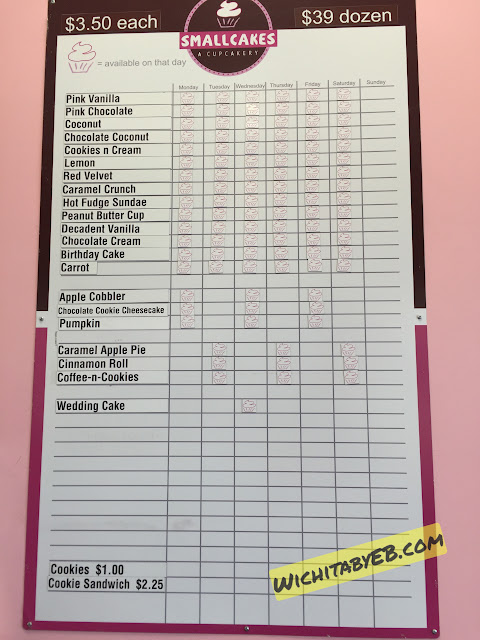 The sticker price might bring some shock to people but a single cupcake there is about the size of 2-3 regular cupcakes. One cupcake would certainly be enough for one person maybe even two. Most desserts in restaurants will run you $5-10 so if you are comparing things, a $3.50 cupcake at Smallcakes isn’t really a bad idea.

Let me tell you what is a bad idea. Ordering over a dozen cupcakes and trying every single one with your coworkers to the point where you have to type a blog out with one eye open because you’re so tired from the sugar high you had earlier in the day. 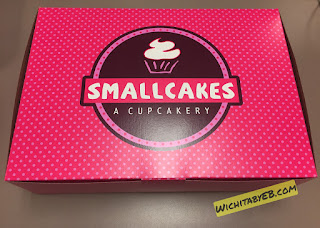 So let me share with you our thoughts on the cupcakes we had.

Some select ones really stood out among all the cupcakes we had tried that afternoon.

Lemon Cupcake: The runaway favorite of the group. It was light and fluffy and a very refreshing taste. This was one of the first cupcakes we tried so nearly all cupcakes stood no chance being compared to the Lemon Cupcake.

Cinnamon Bread Cupcake: At least I think it was the Cinnamon Bread Cupcake. Everybody really liked the frosting on this cupcake. The actual cupcake itself was also really tasty. It had a nice touch of cinnamon flavor to really make it stand out among all the chocolate based cupcakes we had been trying that day.

Birthday Cake was probably the third favorite of the group. The best part of the cupcake was the actual cupcake itself; not so much the sprinkles. It was very moist and flavorful was one person put it.

There was a caramel chocolate cupcake that tasted just like caramel through and through. It was topped with pretzels which gave a good salty compliment to the sweetness of the cupcake.

One of our issues in reviewing every cupcake was the typical person would probably go in and get one cupcake for themselves. Not us, we did things a little unorthodox and ordered a random variety of cupcakes and just cut them into 4th’s or 5th’s and ate away. 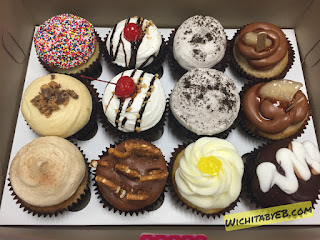 Many of the chocolate based cupcakes started to taste the same after so many different ones with the only difference being the frosting on them. I’m sure we would have found one we liked had we not overdosed on the large amount of physically large cupcakes. We literally had so many cupcakes, one coworker coined the term “cupchuck” based on what she felt like doing after trying probably eight different kinds of cupcakes.

Our final verdict on Smallcakes was we felt they were fantastic. The cupcakes were creative, beautiful and of good quality ingredients; not a single cupcake tasted cheap. One person said she would give a big thumbs up on presentation. To give an honest review though, it should be said that one person out of six came away unimpressed. She said she was let down and just had higher expectations. So after that 5 of 6 left very satisfied…….and full.

These cupcakes would make great gifts for spouses, children, coworkers, anybody. They have great hours so you can even stop on in and pick one up randomly if you’re in the mood for something sweet. Just be warned; be careful of how many you pick up AND eat in one sitting. 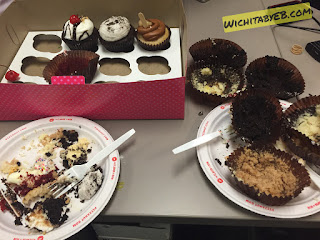 Don’t forget to Like Us on Facebook to keep up to date with everything going on at Wichita By E.B.