Tucked away towards the back of Union Station at Douglas and Mead sits a brand new restaurant that readers should know about. It’s called The Kitchen. 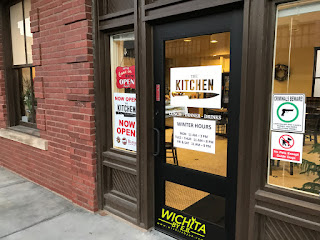 The food is best described as New American. Their goal is to serve fresh, clean delicious food made from scratch. They use all natural meats with no nitrates, sulfates, soy fillers, etc. Everything that they can make from scratch they do, this includes salads dressings to the desserts, entrees, appetizers. everything. They pride themselves on using products that aren’t ever frozen like a burger patty. 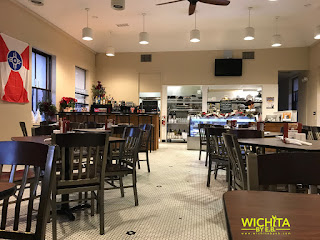 My brothers and sister-in-law stopped in over the weekend to give this new restaurant a shot. They are just six weeks old as of this writing so I was interested to see how they’ve come along since the opening.

The menu had a little bit of everything to choose from. For starters, we went with their soup of the day which was a New England Clam Chowder, their Disco Fries, and Cheesy Lavosh. 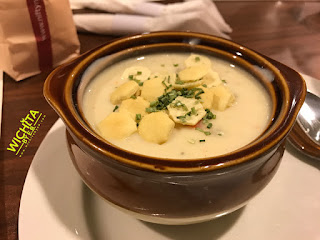 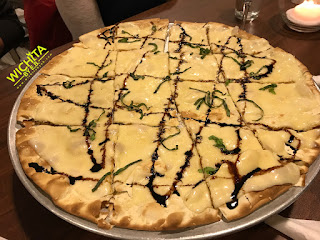 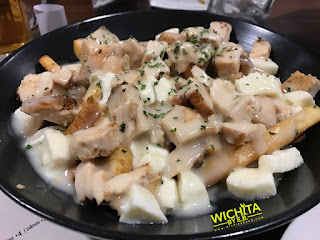 My brothers and I all love Clam Chowder so we were excited to see it was The Kitchen’s soup of the day. We were more excited when it came out and found huge chunks of clam inside. It wasn’t fishy or runny; the consistency was great and the perfect way to start our meal off.

The two appetizers we had were the Cheesy Lavosh and the Disco Fries. Lavosh essentially means flat bread. So imagine a really thin pizza crust topped with a light layering of Havarti and Parmesan cheese topped with a balsamic glaze to give it a sweet aftertaste. Between my brothers and sister-in-law, it stood no chance for making it to the leftover container.

The real winner of the night for the appetizers were the Disco Fries. They are crispy fries topped with skinless all natural chicken breast chunks, light gravy and mozzarella. This is a popular appetizer in New Jersey where the chef is from and we were wondering why it took so long for it to get to Wichita. The light gravy was drool worthy and complimented the crispy fries well. Add in the chicken and cheese and it’s almost like a meal itself. After trying them for our first time and reading reviews online, it’s true that the Disco Fries are a must order on your visit. 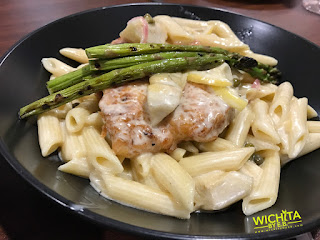 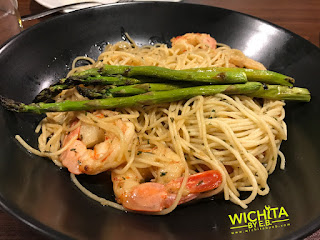 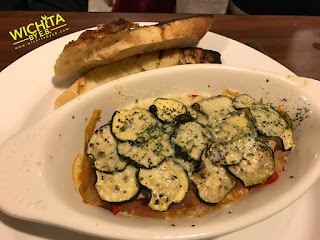 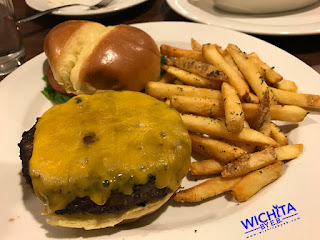 Ratatouille was a must for us. Our only experience with Ratatouille was the 2007 Disney movie, we’ve all never had it before and were curious to see what it was like.

….and we had to thank our curiosity because it was wonderful. The best way we could describe it was to compare it to eating the toppings off of a delicious supreme pizza minus the meat. It was a mix of roasted tomatoes, zucchini, peppers, eggplant, and onions and surprisingly not one item overpowering the other.

The Kitchen Burger we were told was made with a half pound Angus burger made with a patty that’s never been frozen before. The sucker was very big and came with Parmesan seasoned fries, as if we needed more fries after the little Disco party we had with our taste buds. We cut it up in four and it was all well received. You could really tell the quality difference in the burger compared to many other places.

The final two items were winners as well in our book and made it really hard to figure out what we liked the most. The Shrimp Scampi and Chicken Piccatta were fairly light when talking about pasta meals. The sauces on top of the shrimp and chicken weren’t so heavy. It was runny to the point where it wasn’t overly runny and with enough consistency that it stuck well to the pasta. The wine mixed in with the sauce really stuck out to give it that zing; both fantastic meals all in all.

In voting which meal we liked the most, each one got a vote so it was very spread out for our group.

And as if we needed another reason to continue eating, it was time for desserts. After all it was my brother’s birthday “week” so why not continue to gorge ourselves? 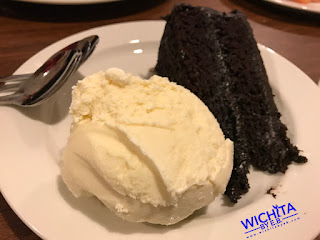 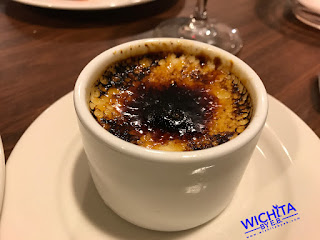 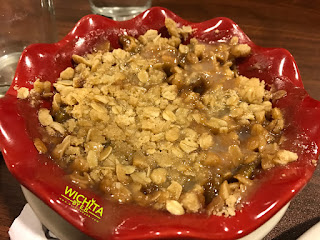 The Crème brûlée (btw, really hard to type out on a keyboard with all those accent marks) and the Apple Crisp were the runaway favorites. The Chocolate Cake wasn’t as rich as we thought it was and still delicious but sitting next to the other two desserts, it stood no chance.

My personal favorite was the Apple Crisp; coming out hot, it was just what I needed for me to throw in the towel and ready to get home for a nap.

My family didn’t know what to expect going to The Kitchen. We didn’t know exactly what New American flavor was but ended up being blown away by the whole experience. My brother and sister-in-law work nearby Union Station and mentioned over and over that they would be coming back especially for carryout on their way home.

The Kitchen also serves wine, cocktails and an assortment of different local craft beers from around town. The owner told us she really wanted to choose good beers from local breweries that went well with her meals.

The service there was also fantastic. From sitting in the back of the restaurant and observing everything, they had a small staff but all worked extremely hard in making sure everyone was being taken care of at all times. The owner/chef did a fantastic job of walking around from table to table explaining the meals and conversing with the patrons even when the restaurant was getting busier as the night progressed.

This was a true winner of a restaurant and a new place we hope can succeed in the new year. We give it our thumbs up and seal of approval.

Check it out yourself. Tell them Wichita By E.B. sent you.

It’ll be one of the best food decisions you’ll make.