If you’re a friend or family member of mine, sometimes you get caught up in these zany ideas that go through my head. Luckily everybody just gives me some eyerolls and goes along with it while thinking, “I might as well do it because he’s just going to badger me to death if I don’t.” This is a story of one of those EPIC ideas gone horribly wrong.

People always talk about “Best Fries” especially in regards to fast food restaurants. I had this grand idea to go to all the major fast food restaurants in a close proximity of each other and then have the kids do a blind taste test. Let’s face it, kids usually determine the destination for fast food so letting them be the testers was a way to 1.) involve them in something fun for this blog and 2.) introduce them to new fries they may never have tried because they think McDonald’s is the only restaurant that makes fries.

I made a short list of restaurants within close distance from each other. The plan was to split up going to the places between my girlfriend and I to pick up food from each place. IT WAS GOING TO BE SOOOOO EPIC! I’m getting exciting just writing about it!

We split the list and made our way to each restaurant. Our stops included McDonald’s, Sonic, Freddy’s, Arby’s, Nu Way, Spangles, Burger King, Wendy’s and Long John Silvers. I wanted to add in Five Guys but it was too far and since it was Sunday, Chick-Fil-A was closed.

Once we both arrived home, we put the fries on the counter and had the kids come down. They weren’t allowed to see what fries were purchased. We had them blindfolded in t-shirts like it was some fraternity ritual.

The method I came up with was to give them a plate of a few fries from each restaurant one by one. Their job was to rate the fries on a Yay or Nay scale and try to determine where the fries were from.

Here’s where the epic fail came into play. Fast food fries do NOT travel well and after going to all the different drive thrus in the middle of the afternoon, they were cold and soggy. I messed up big time. I should have just splurged, not be a cheap ass and had nine different UberEats/GrubHub/whoever all arrive at the exact same time with one order of fries.

Each time the kids were given fries, we were met with complaints about how cold, disgusting and soggy they were. It was as if they were forced to eat spinach. The last time I heard that many complaints, John Higgins was reffing a WSU basketball game. 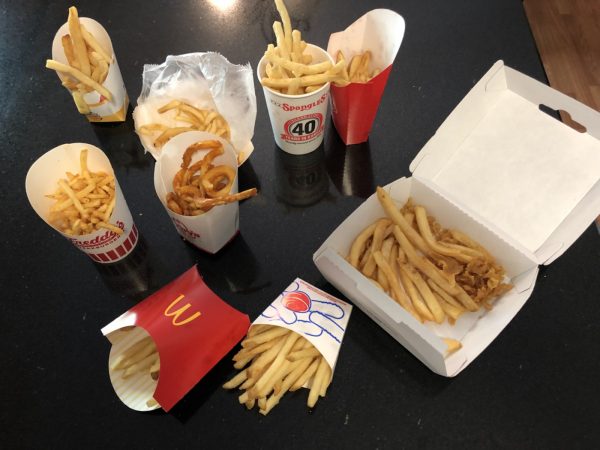 The kids thought all the fries tasted horrible and I’m sure they were. The were able to point out some of the fries from the restaurants like McDonald’s, Freddy’s and Arby’s. They thought the Nu Way fries were Arby’s because of the curly fries. Surprisingly they thought the fries from Long John Silver’s were pretty good. Seriously folks, don’t sleep on LJS fries. I know they were busted for cockroaches by the health department a while ago but that’s just free additional protein.

For what it’s worth, Burger King and Sonic received really bad feedback from the kids. Puke faces was the original reaction when they tried Burger King. Also no alcohol was given to these kids because if that was the case, Spangles would have received very high scores. I love Spangles fries after drinking. Unfortunately, this project didn’t turn out the way I wanted to.

The result of this scientific blind taste test for fries was “I’m an idiot and can’t plan shit right.”

Sorry for wasting your time.