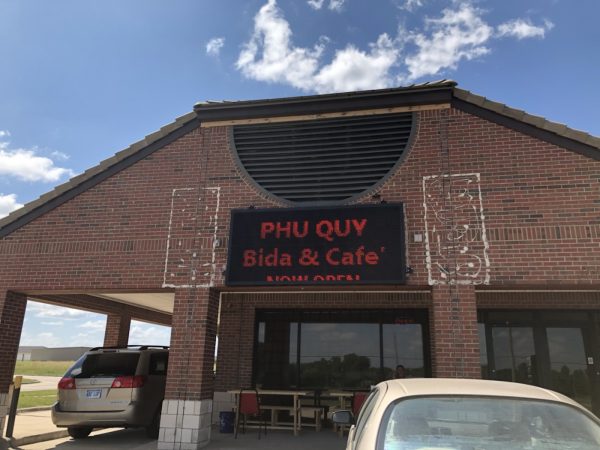 I received word that a new restaurant had just opened at the southwest corner of Harry & Greenwich at 10919 E Harry St which is in the same strip as MoJoe’s Bar & Grill.

Originally, I was told the name of the place was Pho Quy which led me to believe it was a Vietnamese restaurant.

I drove out there to check out it. Come to find out, they are Phu Quy Bida & Cafe. They didn’t have any online presence that it was best to just go myself and see what it was all about. By the name, it’s just a billiard hall and cafe.

When I walked up and reached for the door, some guy sitting out front kind of stopped me in my tracks asking if he could help me. I told him I was walking into eat.

He would then say they only have coffee right now and no food.

I nodded my head and reached for the door again kind of mumbling to myself, “OK, I guess coffee it is.”

He then stopped me again saying they don’t have coffee at the moment, maybe in an hour they will. I was confused as the signs said it was open and the lights were on. I should have tried to open the door again and see if he was going to say, “No pool either.” It was as if he was very intent that I do not go inside and he was on lookout. Just an all-around awkward and sketchy encounter.

I kind of shrugged my shoulders and said, “OK” and just walked off. A simple, “We are closed at the moment” would have sufficed.

So if you’re wondering, that new place called Phu Quy at Harry and Greenwich is not a Vietnamese restaurant. It’s just a Vietnamese billiard hall and coffeeshop.

1 thought on “What is the new ‘Phu Quy’ located at Harry and Greenwich?”