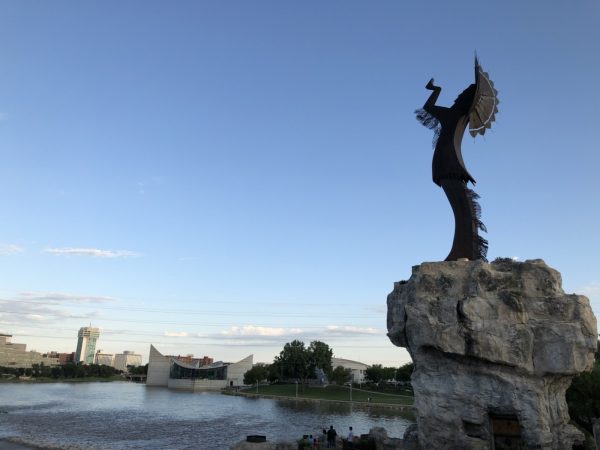 How do we improve Wichita?

What does Wichita need to revitalize itself?

It’s all questions that have been asked so many times. Here’s the kicker though. I actually don’t even care what the answer is because frankly, I’m happy with this city. It’s a place I’ve lived in for close to four decades and the city I’ve chosen to stay and raise my family in.

But since I have this blog and am a part of some community organizations that are vested in the answer, it’s a discussion I don’t mind giving an answer to. I even posted the question on my Facebook page and received some great responses. Many of them were excellent and worth considering but in my opinion what is the one thing we need to make Wichita better?

It’s not just Millennials or Gen-X or the generation before me, it’s everybody. We have to change the way we think and embrace change and learn to live with it. Our city is getting bigger so not everything will be centrally located. Downtown is getting more crowded so that might mean less parking. Things aren’t as cheap as they used to be, that’s just the way of life.

Here’s an example. One of the things people mentioned for what Wichita is missing was an amusement park of some sorts. While I don’t think we will be getting one anytime soon, here’s what the naysayers would complain about with a theme park:

Yes, the reasons would be endless. People would find excuses not to go, the negativity would become infectious and then the park would fail.

Nothing is ever good enough. There are so many people who need an attitude adjustment in our city.

Anytime, I hear someone say, “There’s nothing to do in this city?”. The first thought that comes across my mind is, “You’re fucking kidding me”. There’s plenty to do if people aren’t so closed minded and willing to step outside of their house. There’s literally something to do for people of all ages. It might not be every weekend or everyday but it’s certainly enough.

I’ve seen people complain about the new baseball stadium, the aqua park in south Wichita, new restaurants opening in town, what musical artist are performing, the arrival of electric scooters, everything. I swear the only way to make some people happy would be to see Wichita burn down to the ground yet they still want to live here.

Not everything that arrives is going to be perfect or appeal to you but does that mean you have to bitch about it?

There are certain things people like to complain so much about:

Location: Not everything will open up on the side of town you want. Businesses that open up have done their research and are doing what they feel is best in choosing where they open. At the moment, the northeast side of town is really blowing up. I’m pretty sure places like Dave & Busters or Jersey Mike’s studied everything and chose those locations for a reason. They didn’t choose to go open at 47th and Broadway just because people wanted something out south. The beauty of Wichita? It’s not a long drive. And if something does open up on your side of town, you better support it to prove that something can be successful. I used to be one of those people who complained about driving distances all the time. I still joke about it to this day but that doesn’t prevent me in going from one end of town to the other multiple times a week.

Too Expensive: You want nice quality options, food and fun things to do? Sometimes it’s not going to be what you define as cheap. The days of getting into an amusement park like Joyland because you got good grades are essentially over. While there are still fun affordable things to do in Wichita, not everything will be that way. It doesn’t mean you have to do it all the time though. You think anybody can put up the money to open up an aqua park or movie theatre? I mean, I can’t afford to but if you could props to you.

Parking: Oh my gosh! We want big city entertainment with small town parking? It’s not going to happen. To get a little, we have to give a little. And giving up that super close parking is not going to be the end of the world for a nicer attraction. One thing people asked for was college football or a professional sports team… holy hell people would have a hay day with the parking situation if that ever came to fruition. And yes, I get some people have conditions and can’t walk that far. There are exceptions to everything. Don’t purposely try to be the exception.

It’s Stupid, I’m Not Going: Fantastic. Don’t go (even though chances are you’ve never even been to whatever place you’re complaining about).

I have complete faith there are organizations and people who are striving and continuing to make Wichita a better place but ultimately it starts with our attitudes. We really need to begin to embrace everything and accept the fact that change is going to happen.

Once we can get over that hurdle and truly support everything coming to Wichita, I firmly believe the dominoes will fall and things will get better….. and one day Kellogg construction will be over.

What I’m actually saying is neither will likely happen. We’ll always have the negative people and Kellogg will forever be under construction.

5 thoughts on “How Do We Improve Wichita?”