We love a good food challenge at Wichita By E.B.

Over the years, we’ve done challenges like Mr. Kapow’s infamous wing challenge, Bionic Burger’s Challenge, Jack’s North Hi-Carryout’s burger challenge, the VietNom Nom Go Pho Yourself Challenge and the most recent one at The Foxhole Lounge.

They usually end up in disaster and increased toilet paper sales but make for great memories. Wichita is short on food challenges so for the latest one, we decided to create our own. I’ve read about pizza challenges around the country. Most of you all know about the 29-inch Superdome pizza at AJ’s. The size of pizza runs in line with many of the challenges which require 2-4 people to eat the entire pizza in about 30-60 minutes.

I’ve been in talks with some friends about attempting to eat an entire Superdome pizza in one sitting. One friend of mine said he could easily eat 2/3’s of it himself. Being the typical guy, I said “Oh, I’ll definitely finish the rest. Let’s do it!”

So we headed out to A.J.’s at the Alley, ordered a 29-inch Superdome pizza and gave ourselves an hour to eat the entire thing. Here’s what transpired:

In case you need a visual of how big a Superdome pizza is, here’s what it looks like compared to other traditional sizes. 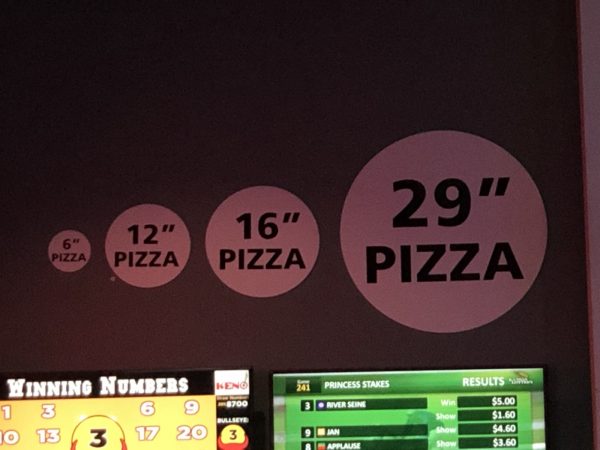 We ordered a Superdome with just pepperoni pizza in hopes it would be less food to eat than a pizza with more toppings. It came out piping hot and we counted the total number of slices which ended up at 60. Obviously some slices were bigger than others, but we weren’t going to discriminate. 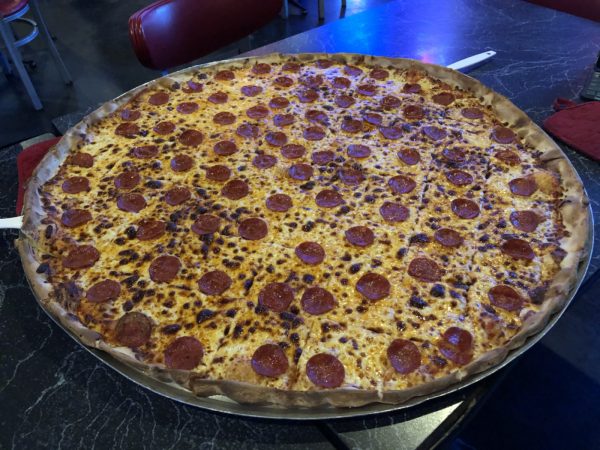 Our plan of action was to eat as much as we could and finish the pizza. Yep, that sounds like a very well-thought-out plan only set forth by two idiots who think they can conquer the world. Ready. Set. Go! 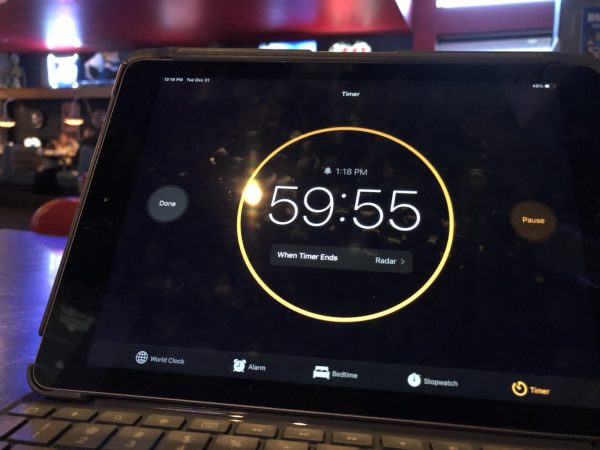 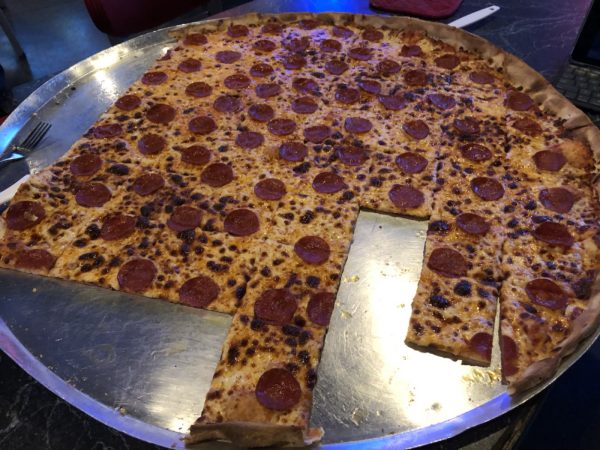 We were cruising along after five minutes. I knocked out four slices while Damon had roughly eight slices. We were well on pace for our goal of 60 total slices.

Other diners would walk by our table and point over at us probably saying to each other:

“Look at those guys, do they really think they can eat all of that?”

Well yes, we think we can! 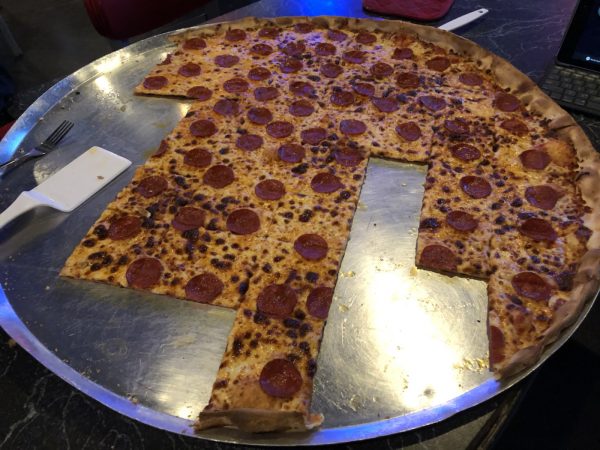 Damon was still chugging along. Meanwhile, there was me who had a couple more slices and tried to act like the guy who was trying to fit in. I was at the six slice mark and thought to myself:

“What the hell did I get myself into? How much is this again?”

Looking at the menu, this challenge was going to cost us around $40. 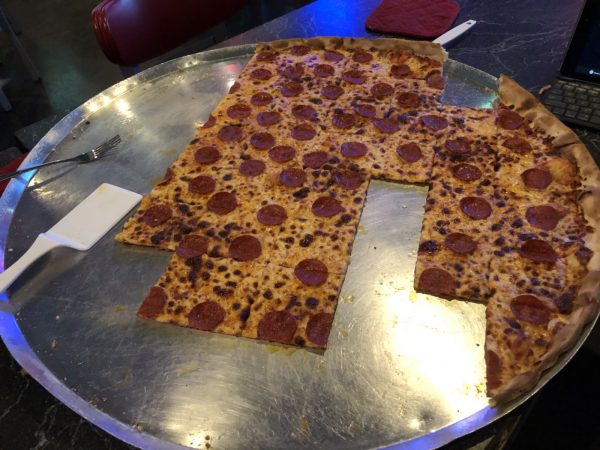 See that little tiny piece missing in the upper right-hand corner? That’s all I had from the 10-15 minute mark. My jaw was getting extremely tired.

Then there was Damon still eating away. I was the Ron Harper to his Michael Jordan.

Around this time, our server walked by. We asked if any two people have ever eaten entire Superdome pizza. Her reply was no. What she probably wanted to say was:

“No two people are stupid enough to even try it…. well until you guys walked in.” 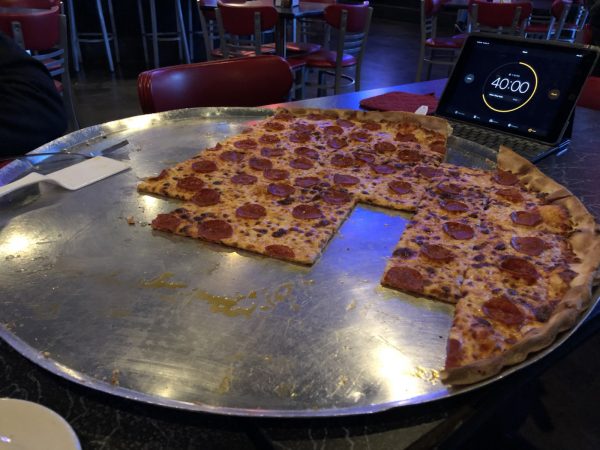 “Eddy, I don’t think we are going to complete this.” 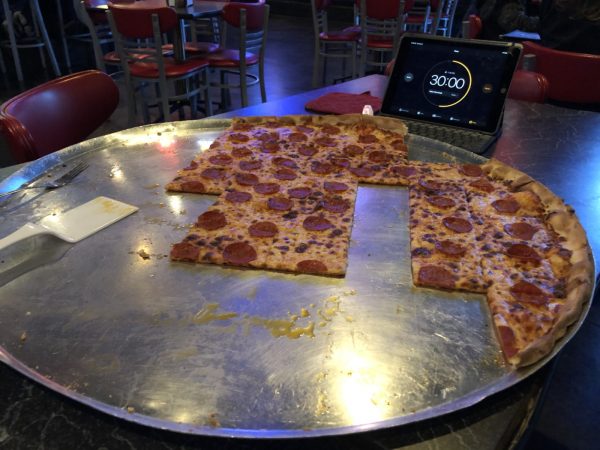 Ten minutes went by and I’m not sure we even touched a slice. The pizza was getting cold and the cheese was rather stiff.

Everything was great in the first ten minutes but halfway through we hit a wall in a bad way.

It was New Year’s Eve and I had a party to attend later that night. Do I continue and possibly put myself in pain? Or do I wisen up and stop to give myself a better chance at enjoying myself at the party? 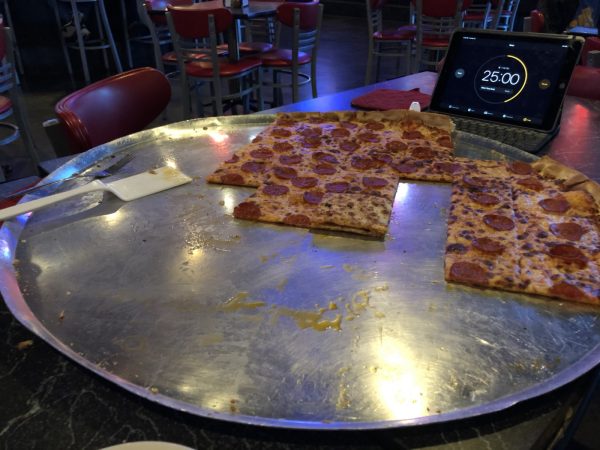 I swear I thought I was eating cardboard. I lost the ability to taste food. My mouth was parched. Why did I ever think this was a possibility?

At this time, Damon said he was going to wave the towel. I refused to quit. He said “Why put ourselves in more pain when we know this isn’t going to be completed?”

I marched on heroically and ate……. 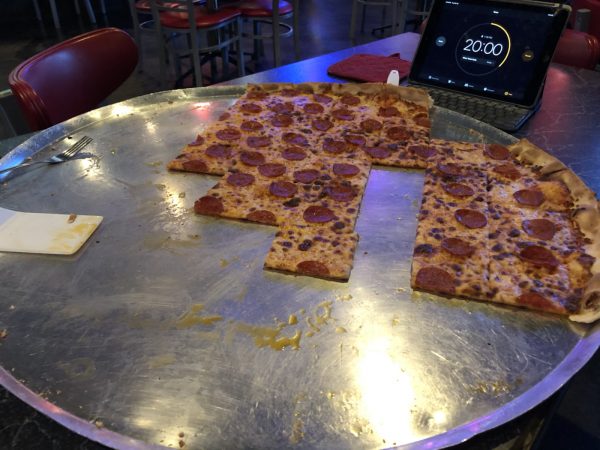 …… well at least I tried to eat. My body wasn’t allowing it.

The people who walked by earlier in the day passed by our table again only to point over. Who knows what they were saying but I wanted to offer them our leftovers because it wasn’t going to happen. 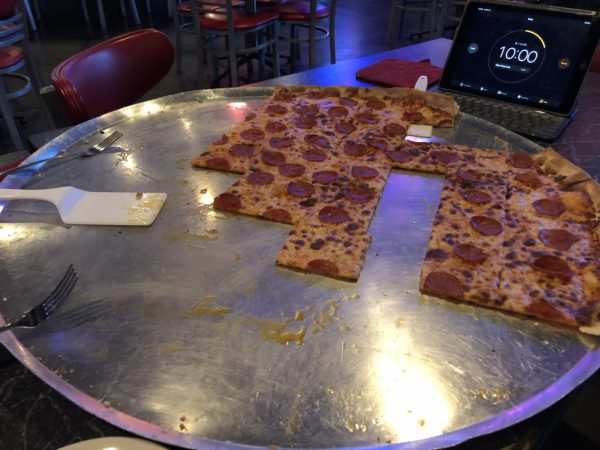 I somehow managed to get a slice in. Damon just sat there and looked at me like I was a poor child. With ten minutes left, were we going to get our second wind? 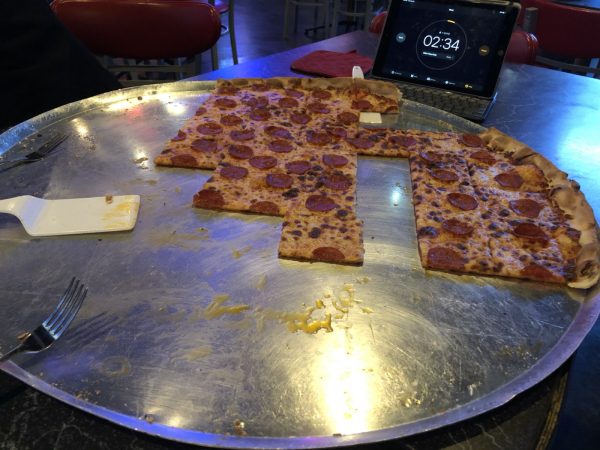 Had the pizza been warm the whole time, we may have been able to get to 45 slices but once it was cold there was no way. It became flavorless and hard to chew. While we enjoy AJ’s Pizza, there was just no chance of two people completing it. If there was a third person, we think it could easily be done……well maybe.

So that leaves the staff at Wichita By E.B. with another loss on the food challenges. We can’t do any of them even ones we make up! Perhaps the next challenge should be to eat an entire box of Stove Top in one sitting. Certainly we could complete that challenge.

But with that said, my New Year’s Resolution is to keep making bad decisions. Who else has a big amount of food I could try to eat?