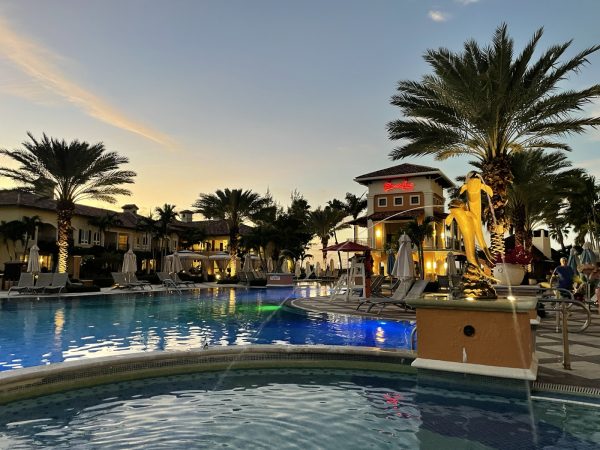 So, you’ve read about the experience at Turks & Caicos, now you want to hear about the food.

There were 21 restaurants and 2 food trucks at the Beaches Resort. While I would like to say I went to all 21, that simply was not the case. I think we stopped by roughly 16 of the options available.

With the resort running at 25% capacity, certain restaurants were only open on certain days and a majority of them required reservations for the evening. Here’s the entire list of the restaurants at Beaches. Like any place, I don’t think anybody is going to like 100% of all the food options available. Some definitely stuck out more than others.

For the kids, there was no question that their favorite place was Bobby Dee’s which was a classic style diner serving burgers, ice cream, sandwiches and more. 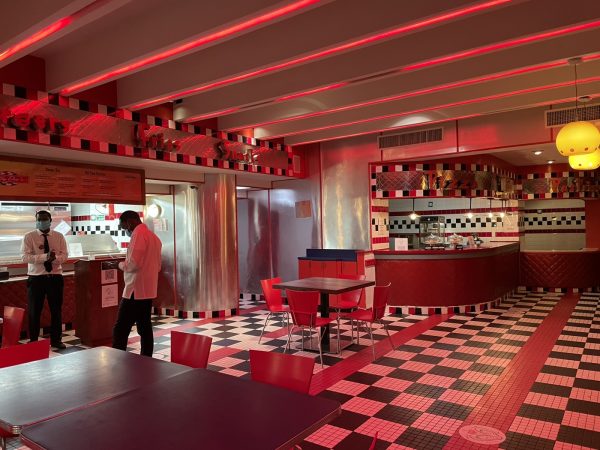 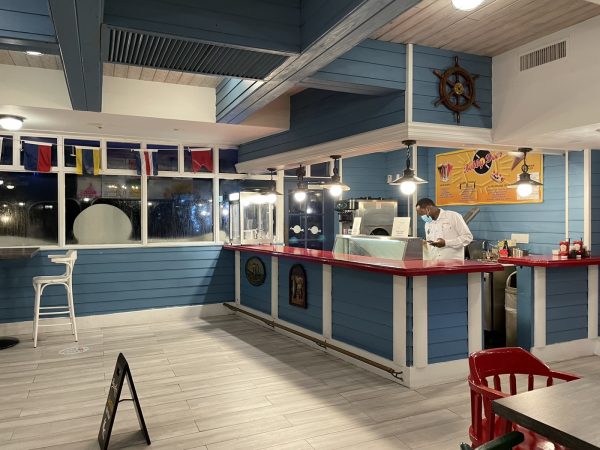 I think the kids went there at least six or seven times. There was even one day we grabbed a ton of carryout and took it back to the pool. We had burgers, reubens, PB&J sandwiches, nuggets, fries, wings, and all the ice cream in the world. From an adult perspective, the food was pretty average but the kids loved every single bite they had. 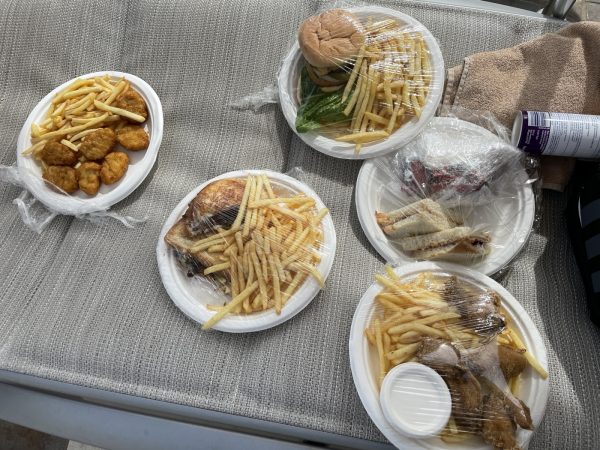 Another favorite was Kimono’s which was their Japanese steakhouse similar to Kobe’s or Sumos here in Wichita. They had roughly six tables running. Unfortunately, our cook looked to still be in training. He wasn’t as engaging as the other chefs. I actually saw him the next day at Bobby Dee’s cooking fried foods which gave us a good laugh.

There was a coconut soup though at Kimono’s that was amazing. So amazing, I had two bowls of it. 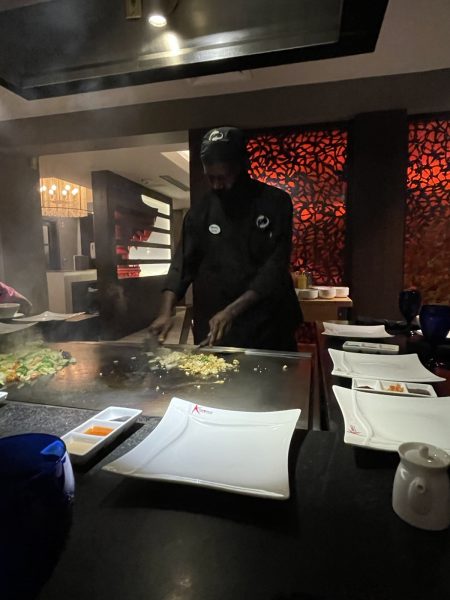 One evening at the Sesame Street party, they had an arrangement of multiple food vendors sitting outside. I got my hands on a sirloin and some goat curry. While the sirloin was a little on the tough side, the goat curry was fantastic. 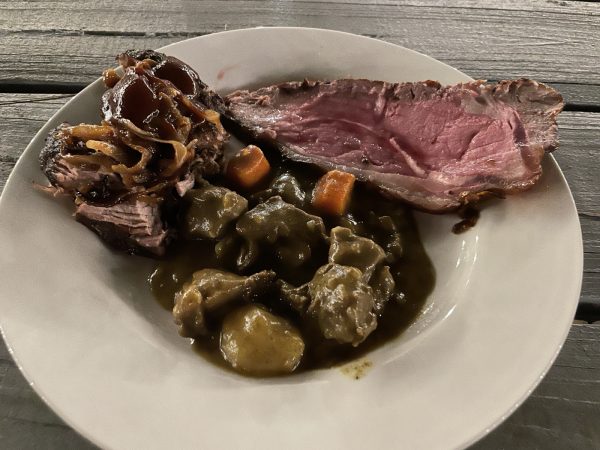 We also checked out a place called Cricketeers that had simple pub food. I had fish and chips along with wings. Nothing too memorable here. 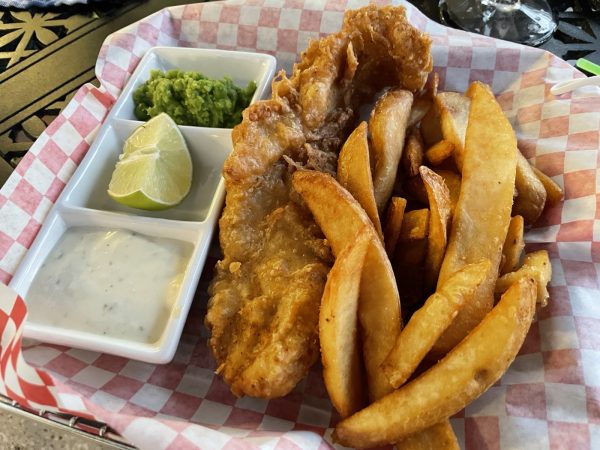 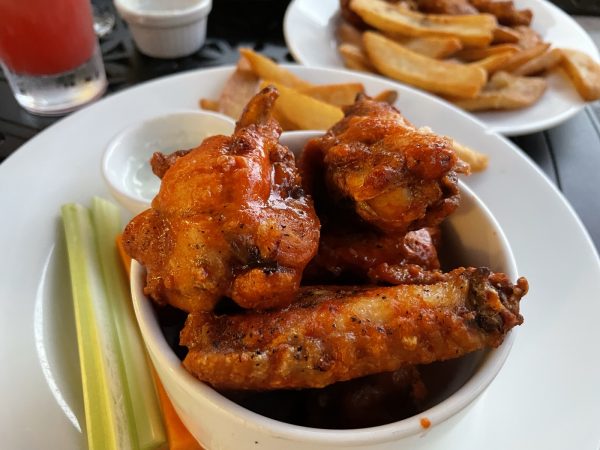 I was told Sopadillas was worth checking out. While looking at their menu, I immediately knew I was going to pig out. I had two orders of lobster and lamb shank (and dessert and appetizers). Oh and some conch and shrimp.

This is just half of the pictures. I stuffed myself and made sure I got my money’s worth. The lamb shank was the best part of the meal followed by the lobster which I wished wasn’t cooked as long….. still satisfying though. 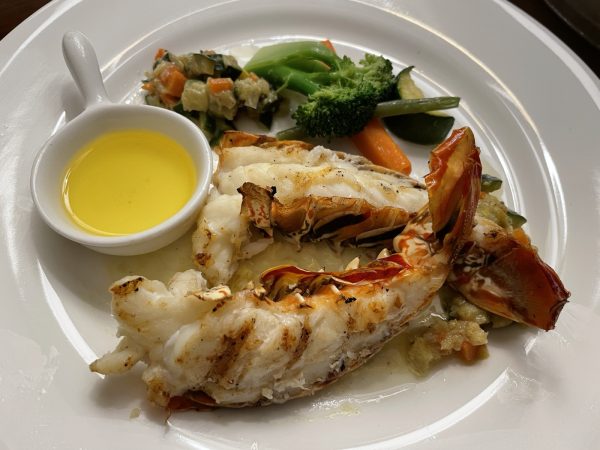 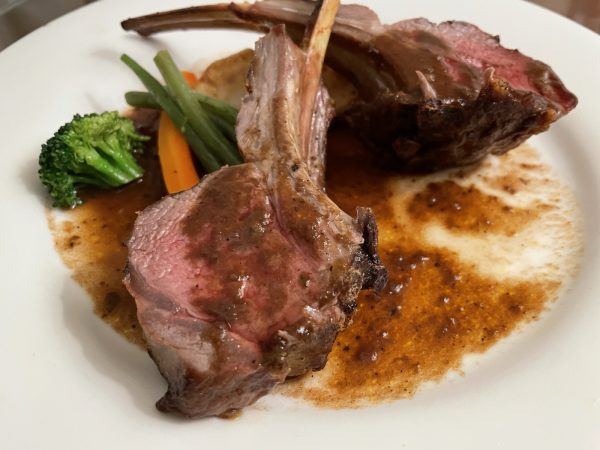 Probably my second favorite visit on the trip was Soy, their Japanese restaurant. I had over twenty slices of salmon sashimi along with salmon caviar. Beaches had some amazing salmon. Nearly everyday, I had smoked salmon for breakfast. 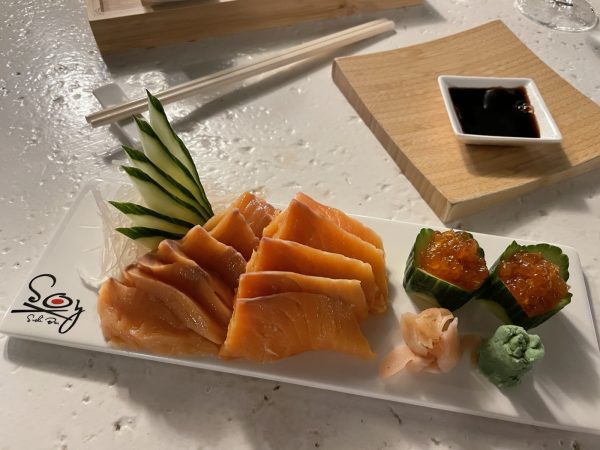 On one evening, we had reservations for Sky which was like a rooftop restaurant that overlooked the resort. No lie, between the four of us we had the crab salad, hand dived scallops, BBQ gulf shrimp, grilled pork belly, seafood gumbo, corinva ceviche, halibut and scallops, braised short rib, confit duck and plum and grilled filet.

They could barely fit the food on our table. Did any food go to waste? Nope, we ate every single bite. Here’s one of the serving trays. 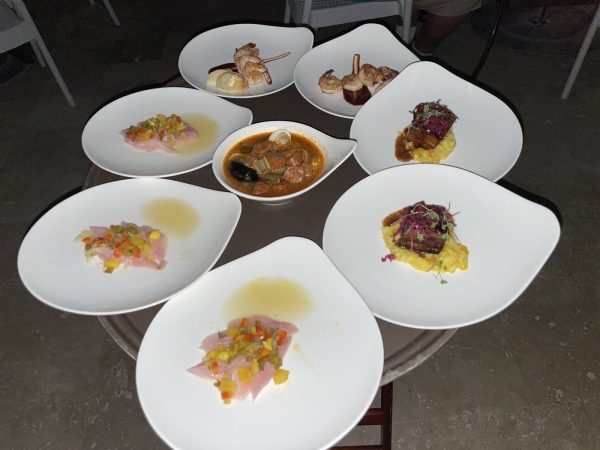 One evening, we set reservations for Neptunes which offered Mediterranean seafood. I kept the seafood train rolling with mussels and an octopus dish of some sort. I couldn’t get enough seafood, it was so good. 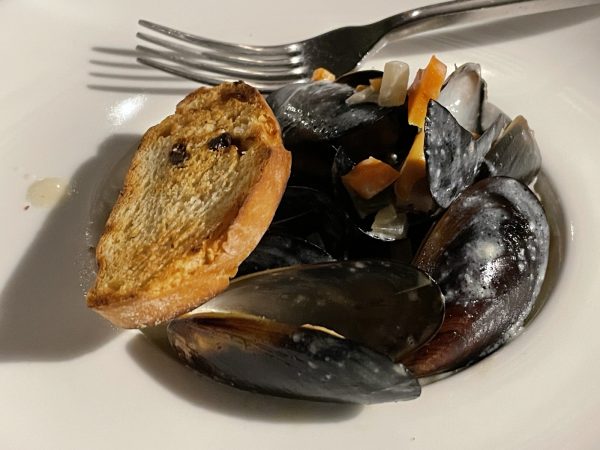 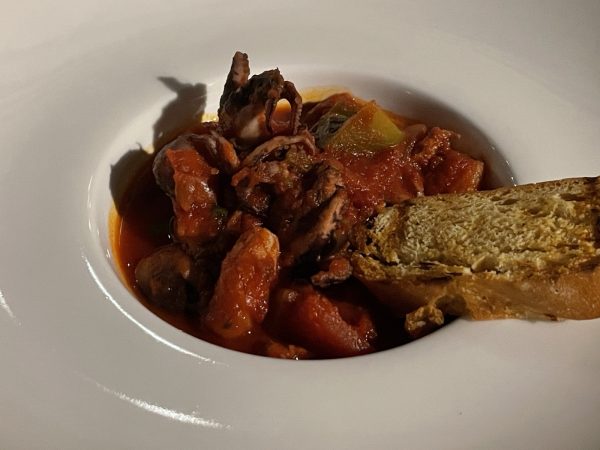 While at the water resort, there was a Mac & Cheese food truck. We tried their taco mac & cheese and the pulled pork mac & cheese which proved to be some highly underrated meals. The kids went back for seconds here. 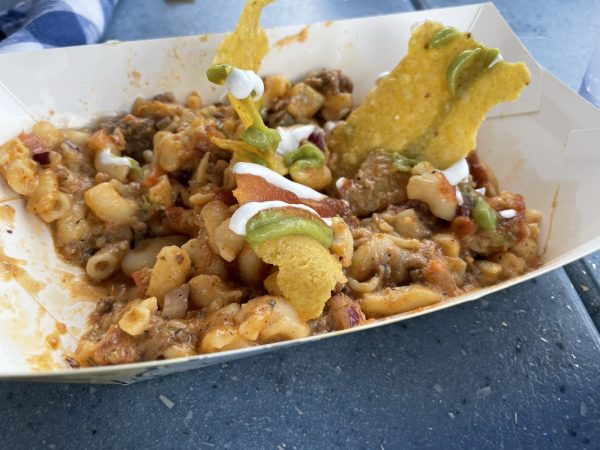 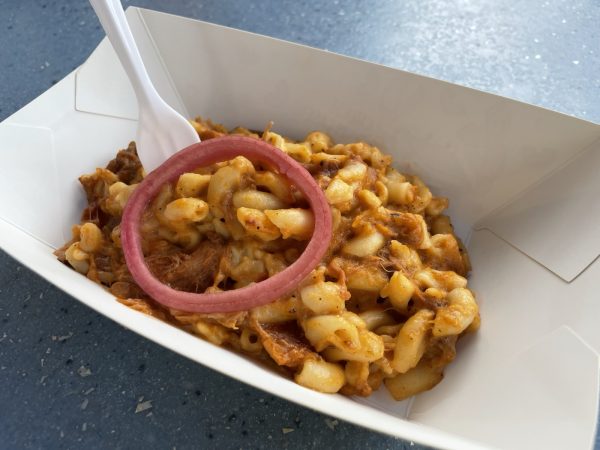 For the pizza fans, they had a brick-oven pizzeria called Dino’s which the pizza was average at best. The spaghetti though was a nice break away from all the seafood. 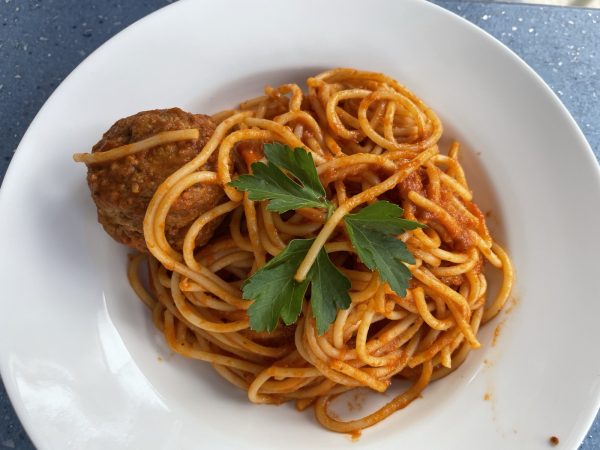 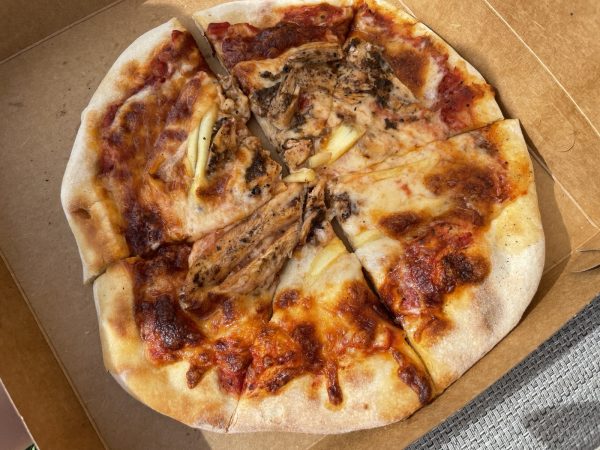 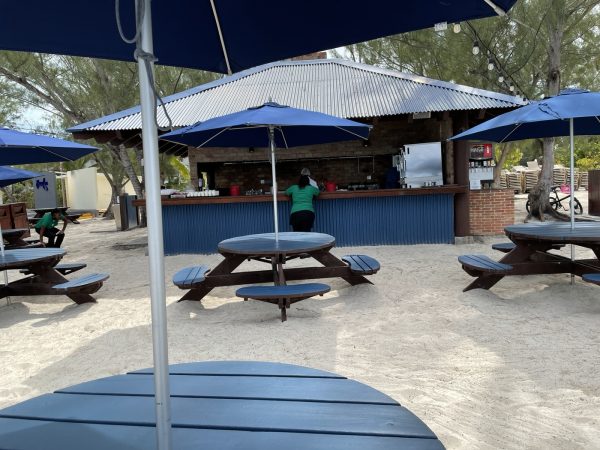 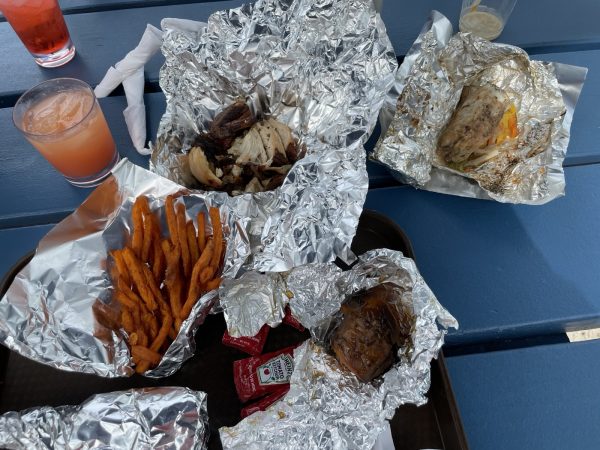 Were we done eating? Not yet. There was a French place called Cafe De Paris that offered pastries. Everything was OK, it was definitely no La Galette here back home but I did enjoy the crepes. 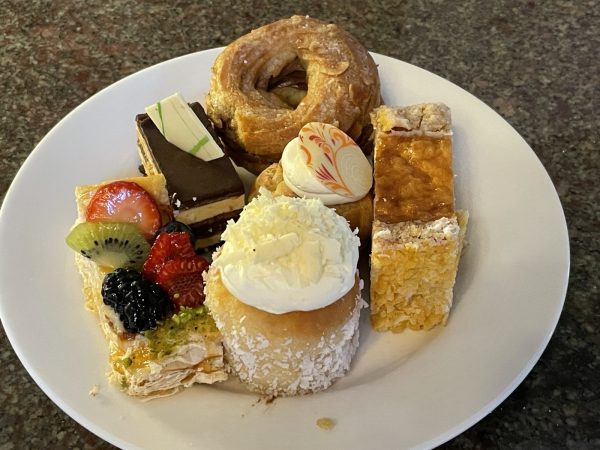 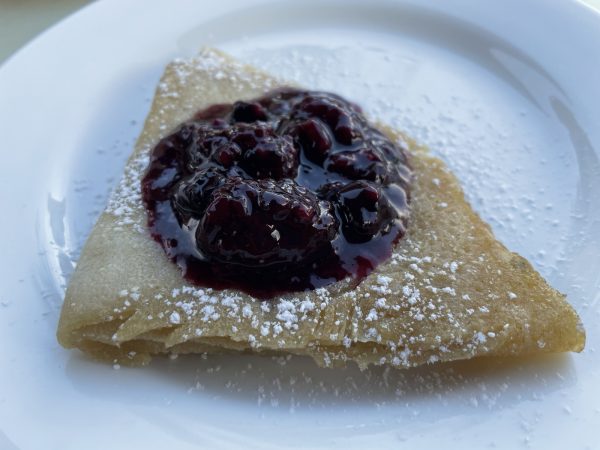 Another family dinner was spent at a restaurant called Bayside. There I had a seafood paella which was pretty decent along with pineapple and conch. They had a musician on site playing music which added to the ambience, otherwise Bayside was one of the less memorable restaurants. 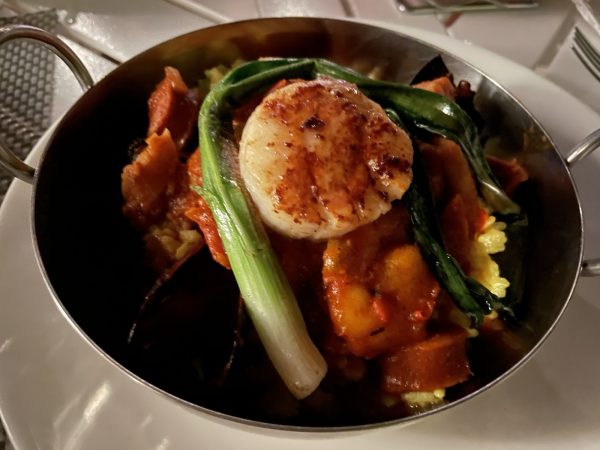 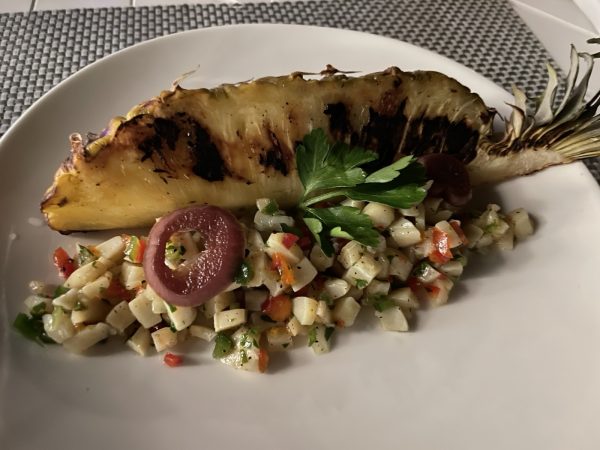 Also, nearly every breakfast place was the same. It was your typical breakfast buffet with breakfast staples. It’s worth noting, all the buffet places they served you. When you walked into the restaurant, they sprayed your hands with sanitizer, handed you a plate and then you showed the servers what you wanted.

Almost every breakfast consisted of cereal, a blueberry muffin, some sliced meat and smoked salmon. I tried to save most of my appetite for lunch, dinner and mojitos. 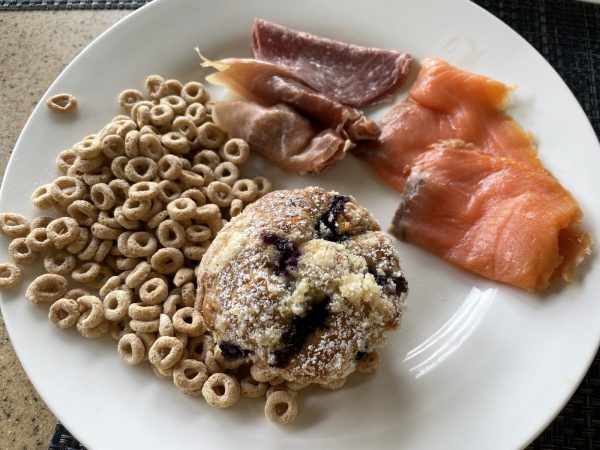 This was all just a glimpse of what we ate. There were so many more dishes we had like swordfish, more curry, chicken paella, chicken marsalla and more.

Overall, I didn’t exactly walk away from Beaches being blown away by the food. My expectations were possibly a little high. The main sticking point was while some of the dishes I had were good to great, I’ve definitely had better elsewhere. For example, the lobster was nice and I ate a ton of it but I’ve had better. And that’s all fine and dandy, what I’m trying to say is keep your expectations tempered. Was the food better though than other all-inclusive resorts I’ve been to? Yes, without a doubt. The selection of restaurants here far surpassed any other resort I’ve ever been to.

My regret was not leaving the resort to eat at some local establishments but I figured with what I was paying, I wanted to eat as much as possible without having to pay another dollar.

I definitely felt like I had my money’s worth of food though. I made sure to eat, eat, eat and not regret a thing. Something to note is many of the portion sizes were small so we ordered multiple dishes at the restaurants. At one restaurant, an order of scallops was really just one scallop.

The service at the restaurants were friendly but they rarely ever refilled drinks. Did they come around and ask if you wanted more alcohol? All the time! But if you had a water cup, you’d be lucky to get more of that.

Bottom line, you’ll enjoy the food. It may not blow you away but you’ll find something you like. And if you’re a seafood lover, there’s plenty to be had.