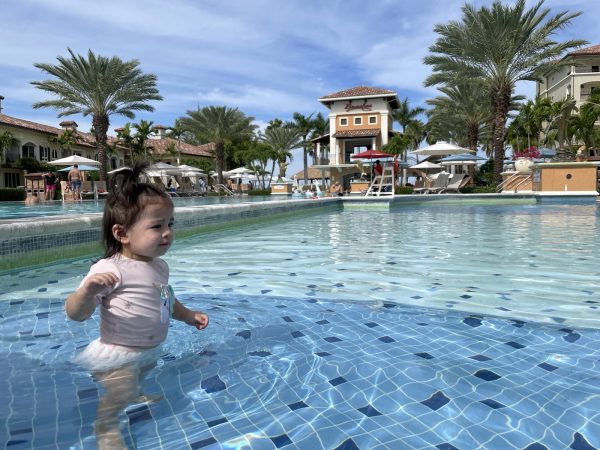 One of the big questions I had about my trip to Turks & Caicos mostly from parents was what it was like traveling with a toddler. Our daughter is 18-months-old and there was a debate on whether we should bring her on our trip to the Beaches resort.

So many people told me it’s great to travel when your child is under two because the flight is free. At Beaches, children under two are free as well as long as they fit in your room’s occupancy. Aside from some minor international fees for traveling with a baby on your lap, the money wasn’t really a factor.

Personally, I struggled with leaving her at home even though we had someone lined up to watch her. After all, it was a family trip and it wouldn’t have been complete without her there. Had she been at home, I would have always wondered if she would have enjoyed it. Then of course, I would have missed her dearly. On the flip side, I stressed about how she would be on the flight and at the resort. But after much debate and sleeping on it, we decided to bring her along. Here’s how it all went down:

Our flight to Turks was out of Kansas City at 5 a.m. Instead of getting a hotel room the night before, we decided to drive up that evening/morning. Our thought was she would sleep in the car better than sleeping in a hotel room.

We were wrong, she slept maybe an hour or two on the way there. When we arrived to the airport, she was still awake and active as ever. We let her walk around the airport, thinking she’d tire out. Well on the flight to Miami which was roughly four hours, she was a hot mess; squirmy, whiny, fussy. She didn’t sleep a wink. I bought her a bunch of toys from the Dollar Tree at the advice from friends which kept her kind of busy.

Once at the Miami airport, she was nonstop walking around still. I was shocked she was not tired. Once we boarded the flight to head to Turks, she was the same way for half the flight. Then at the final 30 minutes, she fell asleep.

The 30-minute nap was such a tease for her. The moment we woke her up, she was a loud crying mess. Going through customs was probably painful for so many ears. All you could hear in the airport waiting in line was a crying baby. Many of the security guards and agents at the airport were incredibly nice to us despite the bleeding ears. It was extremely stressful, though.

Our daughter was calm on the shuttle ride to the resort. Once we arrived, that was a different matter. She was back to her fussy self. I’m sure the heat didn’t help either.

The moment we settled, we made our way to find something to eat but her eyes caught the water and she only wanted to walk that way. I eventually gave in and took her to the pool to calm her down while everyone grabbed a quick bite. Once they were done eating, we switched turns and I ate.

It was probably the only day out of the first half of the trip she was happy. 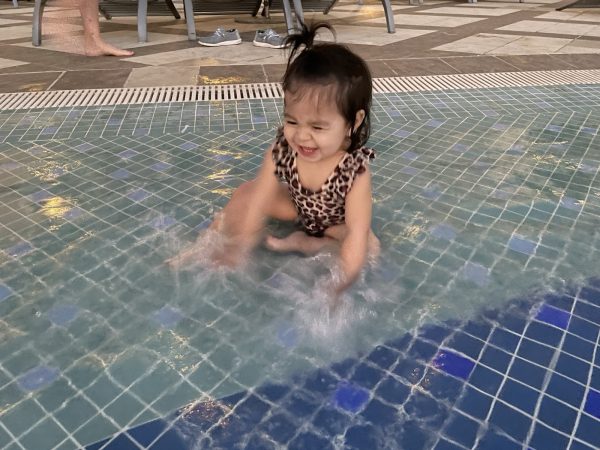 The First Half of the Trip

The first half of the trip was a disaster and that was putting it lightly. She wasn’t sleeping, she cried so much, and was incredibly fussy. It was like the first few months of parenthood all over again.

She had bug bites, a heat rash and didn’t cooperate with anyone.

There was a daycare that parents could use for free. When we dropped her off, the ladies there said we will contact you if she’s too fussy so you can pick her up. A couple of hours later, we got the call and I had to come get her.

We decided to take her to the beach and the first time she walked on sand, it was as if she stepped on lava. She hated it. Eventually, we were able to calm her down. I sat her down on my lap in front of the ocean. I wasn’t paying attention and a small wave came at us and splashed her in the face. Everything was covered in sand and she went ballistic. I failed miserably.

The first half of the trip was so bad. We had little sleep and didn’t get to fully enjoy the trip. It was a true disaster that left us regretting the decision to bring her. I was mentally exhausted.

The Second Half of the Trip

Every night, our daughter slept in bed with us. It was a first for us as she’s always been a crib sleeper but this was the only way to calm her down. After a few days, she started to get back on a regular sleep schedule and had the chance to catch up on all her lost sleep.

There was an onsite nurse who gave us some lotion for her heat rash that helped immensely.

She started to be less fussy and enjoyed being outside. It was to the point, she would walk straight to sliding glass door upon waking up knowing the pool was only footsteps away. She was in love with the pool and could have easily spent 4-5 hours straight there. We also caught a glimpse of her first major tantrum when we pulled her out of the pool.

We decided to take her back to the beach and while the sand bothered her, she slowly got used to it. But she would still come to us every five seconds a bit of sand was on her hand (SUCH. A. DIVA.)

Cleaning the sand from her was the worst. It was like glitter, we couldn’t get rid of it. 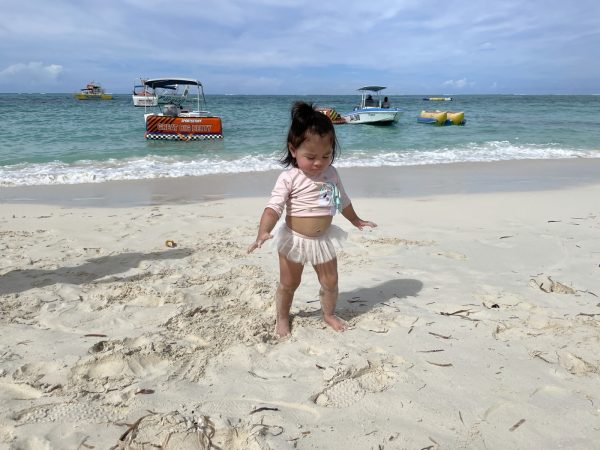 She was still a disaster with the daycare but the one night we had a babysitter come to our room, she was an angel.

The last half of the trip was a complete 180 from the first half. All she needed was some sleep and time to get accustomed to her surroundings.

Flying back was a breeze with her. We had a 1 p.m. flight so she had time to get some rest and a proper breakfast. We found out she loved Apple Jacks while there. Every part of the flight she either slept or just sat on our lap and gladly watched Little Einsteins on the iPad.

Going into the trip, I think the thought of being away from her for that long pained me. Plus we watch a lot of Trolls at home and a quote from the movie stuck out, “No troll left behind!” I felt bad leaving her behind when everyone else was having fun. I get it, she’s 18-months-old and wouldn’t remember a thing. But to me family is family and we all stick together. But after the first half of the trip, I think an exception would be made for next time.

I don’t regret bringing her after looking back on it. It was a memory we made as a family which outweighed the bad. But would I take her again if I had the opportunity to return to the beach in the next year? Nope.

If you do decide to take your child, baby, infant, toddler, whatever, I would highly recommend going at a time that allows your child to be properly rested. Bring plenty of toys, games and movies with you on the plane. Don’t let the wave come crashing on your kid. And lastly, pack plenty of patience.