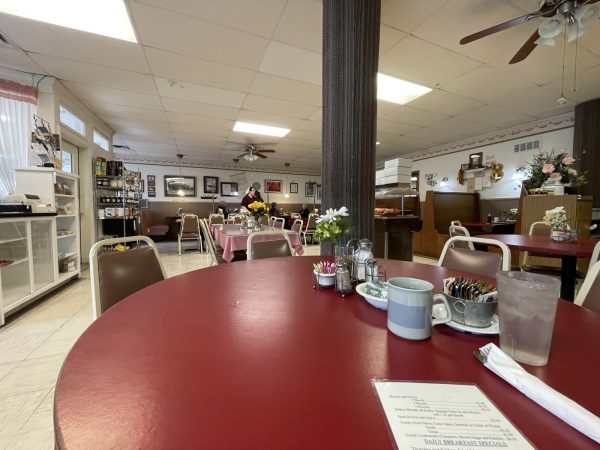 The picture above is my exact point of view when I was grabbing breakfast at Carolyn’s Essenhaus in Arlington, KS. It was an awesome breakfast where the service was wonderful.

When I arrived at the small-town restaurant, the server said I could grab a seat anywhere. I was there alone. The whole purpose of me going was to get some breakfast, get some quiet time to be myself, bring my laptop and eat and blog. Sometimes I dine by myself to reflect on things and just have some me time.

So, there I was sitting at the circular table, minding my own business. Next thing I know two men come in at separate times by themselves. They walk over to my table set their cups down, grab some pastries and sit right down at my table. There were probably 30 open tables spread out through the restaurant and they chose to sit at the one I was at.

Here were the thoughts going through my head:

I didn’t know what to do. I thought about getting up and moving to another table, but that would have been painfully obvious. While they were sitting there, one guy just looked at his phone and another gentleman was perusing through a magazine.

It was complete silence. Nobody said a thing. I then thought about asking them if this was their table and apologizing and moving. I texted others to get some advice on what to do and nobody had anything worthwhile to offer. So, I continued sitting there in awkward silence.

Slowly, the two men begin to chat with each other while I am this odd man out. A server walked over, knew both men, took their order and walked off. Was I in the freaking Twilight Zone?

My food then arrived and I over ordered. I had an extra breakfast sandwich I didn’t want and offered it to my newfound breakfast companions. One guy looks at me and says, “I’ll take it”. He leans over, grabs the sandwich and goes back to his phone. That was the last time we exchanged words. It was such a weird experience.

He leaves and the other man looks at me and says, “You just passing through town?” I told him I came in from Wichita because I heard the food was good. He suggested I try the strawberry pie. I told him I would and offered to purchase him a pie as a thank you for the recommendation but he politely declined. Soon after, he would tab out and leave.

I finally had my peace and quiet.

After sharing the story with other friends later in the day, one friend from Kingman, KS told me her husband knew the exact table I was sitting at. He said that’s the “farmer’s table” and the one table where some locals would congregate and chat over breakfast or lunch. He said it’s safer to sit at square tables. Of all the tables inside the big restaurant of Carolyn’s Essenhaus, of course I happened to sit at the on table everybody wants to be at. A heads up from the server would have been nice. Apparently, this is pretty common in smaller towns and something I’m not used to. Don’t get me wrong, I’m not anti-social but sometimes I want me time.

Moving forward on all small-town visits, I’m only sitting at square tables.

6 thoughts on “The time I had a really awkward breakfast”