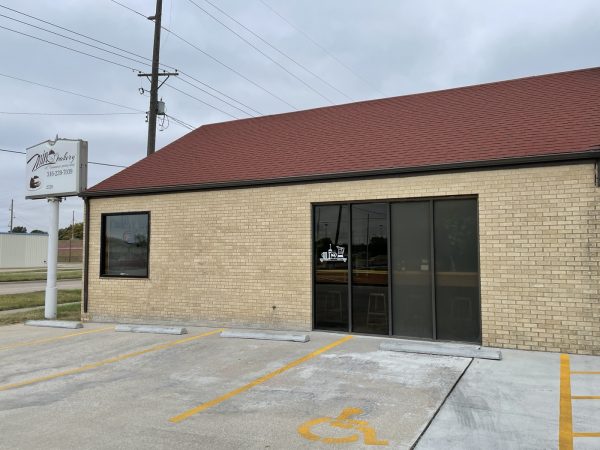 In 2021, a Vietnamese pastry shop opened at 2528 S. Oliver called Mi No Bakery. When they first started, their sole focus was on different pastries and desserts. The setup was similar to Juarez Bakery, where you could grab a tray and tongs to select the items you wanted. The shelves at Mi No Bakery were filled with all sorts of goodies that you couldn’t find elsewhere. It was a truly unique offering in Wichita.

Since then, the couple who owns Mi No has been working hard to expand the offering to include drinks and savory items.

Just like the first time I stopped in, the display cases were filled with different Vietnamese and French-inspired pastries and desserts. They had cream puffs, egg tarts, tiramisu, taro buns, waffles, floss buns, flan, and so much more.

Moments after I took my pictures, they came out with even more goodies. 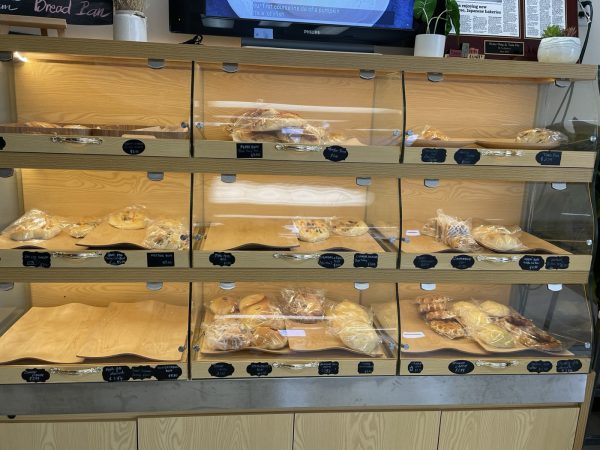 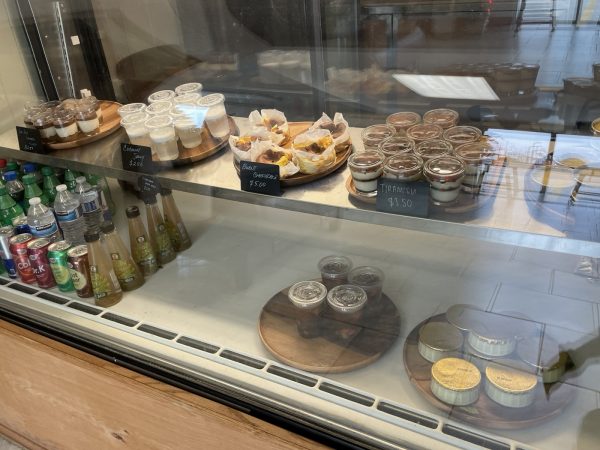 The sole purpose of my visit was to check out the savory items, though. I noticed that Mi No Bakery was offering breakfast platters and Bánh mì sandwiches. They released a new menu that caught my eye and had me drooling. 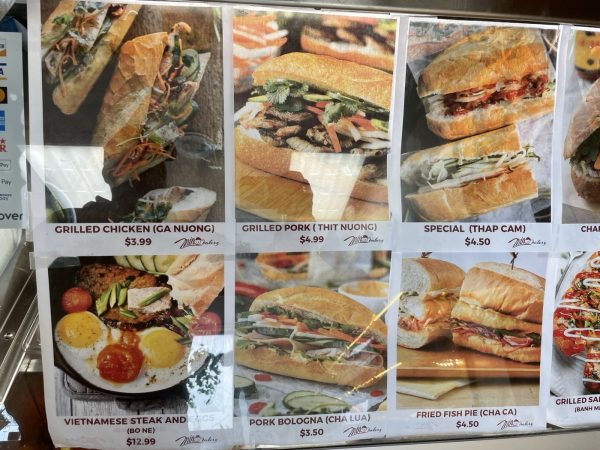 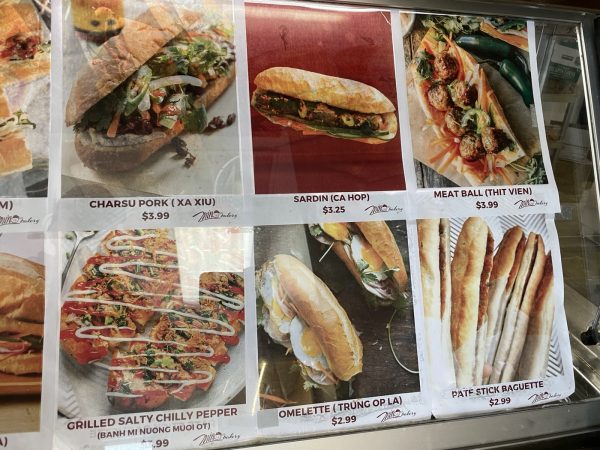 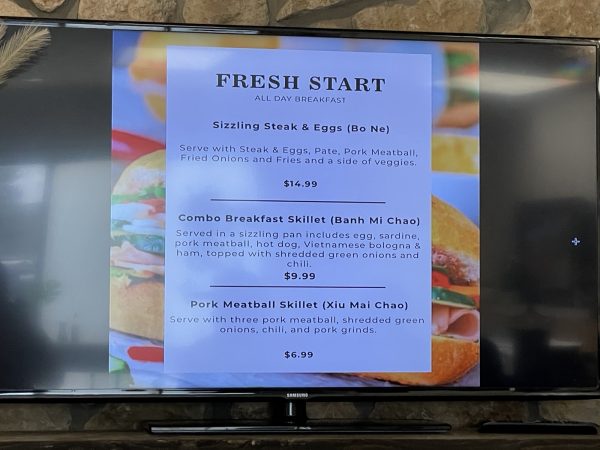 I started off with a Bánh Mì Chao which was essentially a combo breakfast skillet. It was served in a sizzling pan that included egg, sardines, pork, meatball, hot dog, Vietnamese bologna, and ham. Then it was topped with shredded green onions, chili and served with bread. This dish was served immediately after it was cooked.

It was truly the highlight of my meal. The egg yolk combined with the some sort of chili sauce made for a greasy, yet tasty sauce. I loved dipping my crispy bread into it. There was such a variety of different proteins that gave the dish a beautiful flavor profile. And yes, I left behind plenty of crumbs upon finishing. I can’t recall ever having a breakfast like this at a restaurant, which made the experience even more magical.

For what it’s worth, breakfast is served all day long. 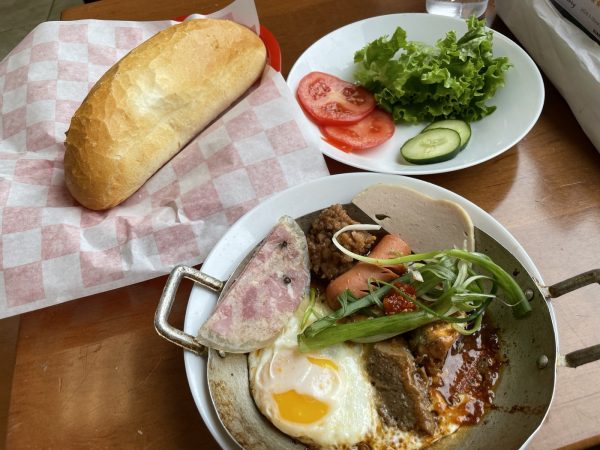 Wanting to try additional items, I had the Bánh Mì Nướng Muối Ớt which was also called “grilled salty chilly pepper” on the menu and a Charsu Pork Bánh Mì.

The popular Vietnamese street food, Bánh Mì Nướng Muối Ớt, was a baguette flattened then smeared with sate chili oil, scallion oil and melted butter. It was cut up into bite-sized pieces and then topped with mayo, slices of hot dog, dried pork, and pepper flakes. Once again, this was another rare dish in town.

While I ate this by myself, it would have made for a great appetizer with a group of people. It was a mix of spicy, yet savory, followed with a crunchy texture thanks in part to the bread. It was unique and flavorful all at once. 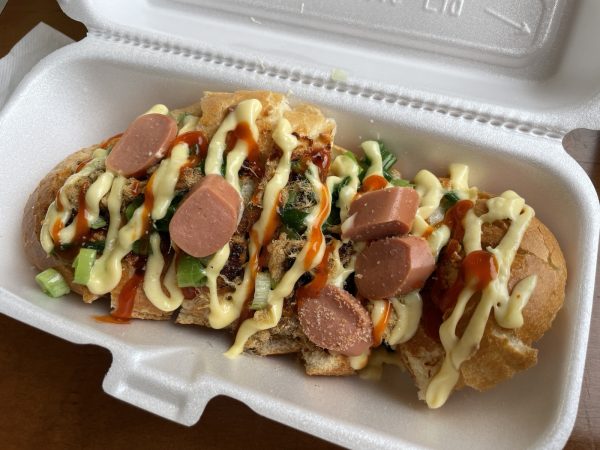 No complaints about my Bánh Mì either, the bread was everything for me and made the sandwich. The best part was that Mi No Bakery didn’t charge an arm and a leg for the sandwiches. Nearly every one was under $4.50. 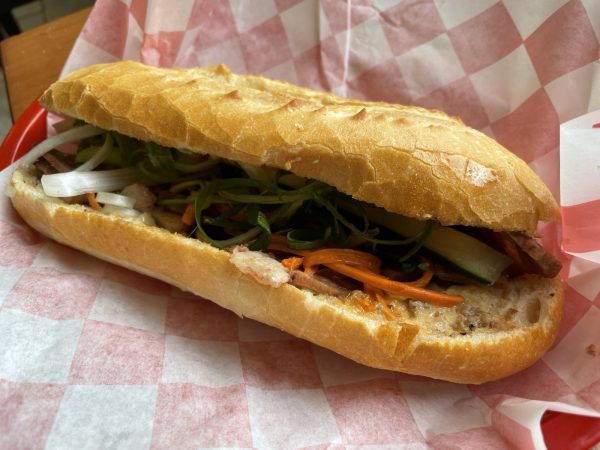 Weeks later after this blog was originally posted, I returned with my mother to introduce her to the bakery. She loved it and found many favorites that reminded her of home. That time, I went with the sizzling steak and eggs. Ignore the fries on top, they threw some on there because my daughter was with me on the daddy/grandma/daughter outing and that was the only thing she would eat that day. Like everything Mi No Bakery puts out, it was delicious.

Aside from that, my mother was a big fan. Let me tell you, to get her stamp of approval is rare and worth celebrating. I still haven’t received it in over 40 years. 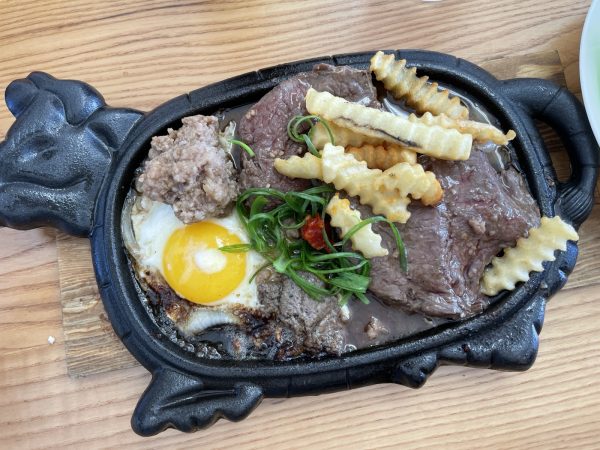 As many of you know, I love tiramisu and grabbed some to go. That’s still sitting in my fridge because I was incredibly full. I also grabbed some vanilla cream bear snacks to go for my daughter. It was a bear-shaped dessert with a cream filling. My daughter saw them and instantly yelled, “Bear!!!”. She spent the remainder of the night snacking on her cute little treats. 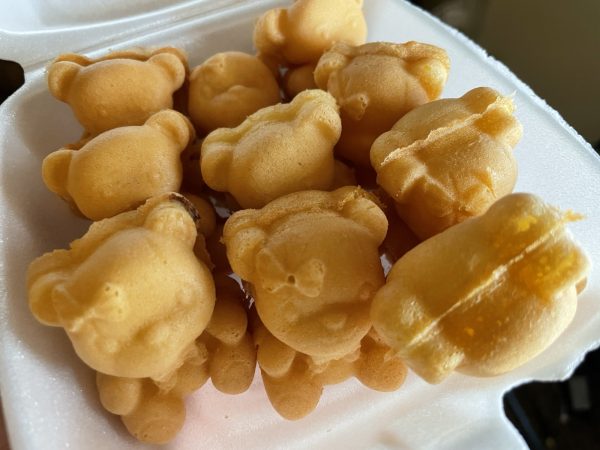 My second visit to Mi No Bakery was absolutely splendid. They’ve proven themselves to make some remarkable pastries, and this latest stop showed me they could knock it out of the park with their other dishes.

I spoke to the owners and they told me they have more ideas up their sleeves for unique foods they want to put on the menu. Unfortunately, they don’t have the staffing at the moment. It’s essentially a two-person operation with the couple doing all the work, which made me respect them even more. At no point did they seem upset or complain about the situation. They had such a positive mentality and showed lots of passion for what they were doing.

In a city full of restaurants, Mi No Bakery definitely stands out with what they bring to Wichita. I would be doing a disservice to the local dining scene by not encouraging readers to take a visit. Go there….soon.