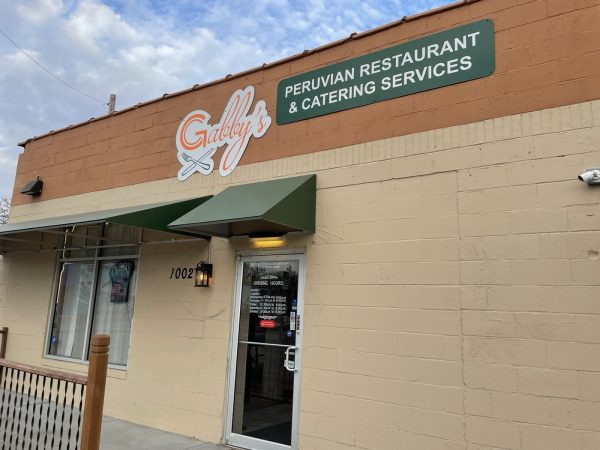 With the release of our International Dining Guide, I thought it’d be nice to revisit many of my favorites over the course of the year. One of those is Gabby’s Peruvian Restaurant. As the name says, they are a Peruvian restaurant; the only one in town. They’ve had quite the story, originally opening up in a small space in Delano and eventually moving to where they are now at 1002 S. Seneca. In 2020 during one of the worst years in the industry’s history, Gabby’s planned to close. Following an out pour of support and cries to stay open, they reversed the decision.

The popular Peruvian restaurant, like all other businesses, are grinding away day by day, hoping to continue to introduce others to their food. Let’s revisit them.

I dropped by myself over the weekend to say hi and check out what’s new at Gabby’s. They had a daily specials’ menu with some new items on there that sounded delicious. 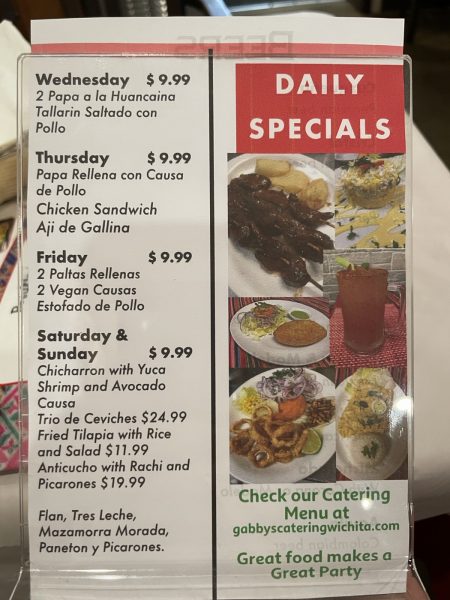 For my Saturday lunch outing, I had the Shrimp and Avocado Causa along with the Anticucho with Rachi and Picarones. They were both dishes I haven’t had before or heard of.

Starting off with the Shrimp and Avocado Causa. There are over 3,800 types of potatoes in Peru, so it only makes sense that potatoes play a big part in their dishes. Causa is one of the most popular dishes; it’s a layered potato terrine that it stuffed with avocado in this instance and topped with shrimp.

It’s something hard to describe, but wonderful to eat. The causa had a mashed potatoes type texture and a flavor, but more vibrant and citrusy. The shrimp had a similar flavor with an acidic blast that livened up the causa even more. I loved every second of it. 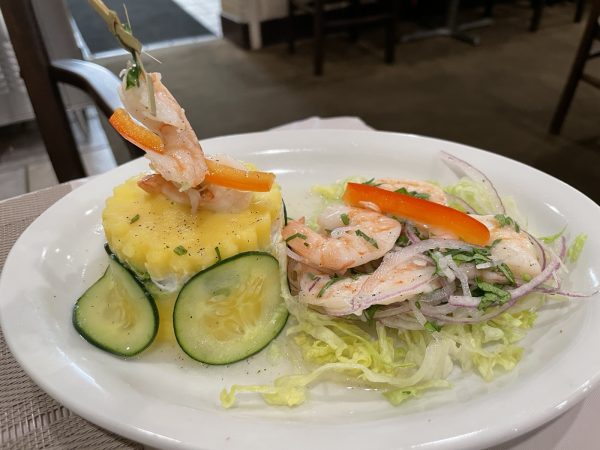 The Anticucho with Rachi and Picarones was another fantastic dish. The anticucho was a beef heart presented on a skewer. I’m not sure what type of marinade they used, but it really gave it a sweet flavor that was tender to bite into. It was served with a side of Rachi which is basically cow’s belly, like tripe in a way. It’s slices of cow belly and then seasoned. The texture may not be for everyone as it’s very chewy, but if you enjoy tripe like I do, this is something worth trying. Also on my plate were some potatoes, because why not? 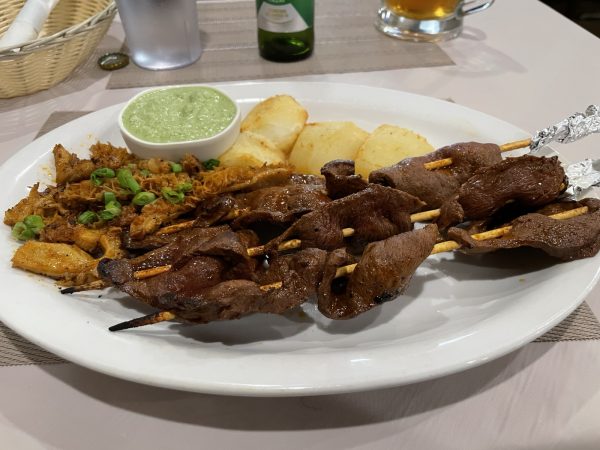 You might be asking, “What about the Picarones that was advertised in the meal?” Well, the meal was like two courses. The main part consisted of the anticucho, potatoes and rachi. The second course was the dessert which is what the purpose of the picarones was for.

Picarones was described to me as a Peruvian doughnut. It’s like a pastry made with flour, squash and sweet potato and served with a rich syrup. They are meant to be eaten fresh and immediately. It had a crispy exterior like a beignet and soft interior like a doughnut. It was beautiful and the best way to end my meal. 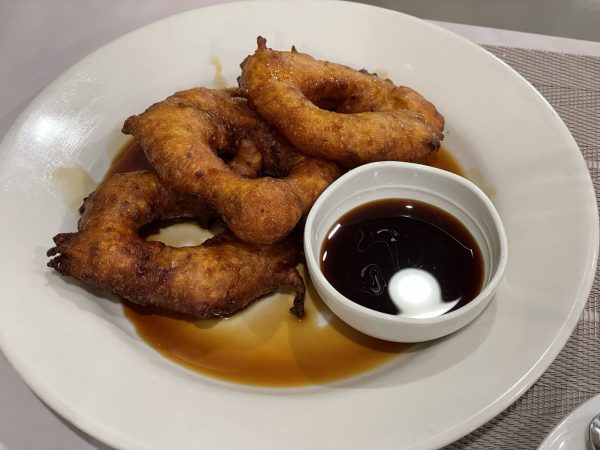 And to all the beer drinkers out there, Gabby’s recently started serving Peruvian beers along with a selection from other countries like Honduras, Guatemala and Colombia. 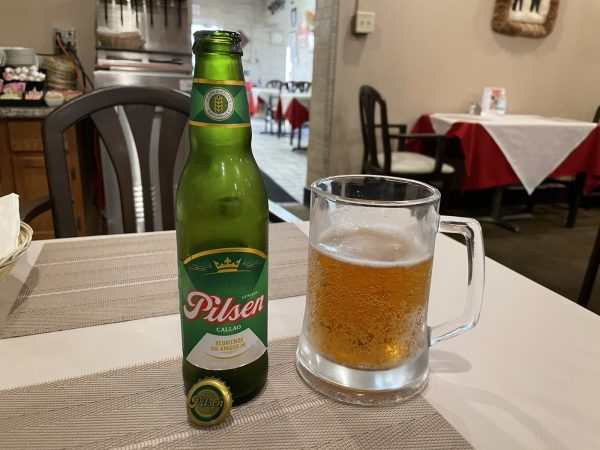 Gabby’s Peruvian Restaurant is a true gem in our city. It’s one of those places that constantly deserves our support as it showcases the diversity we have. I love them so much. 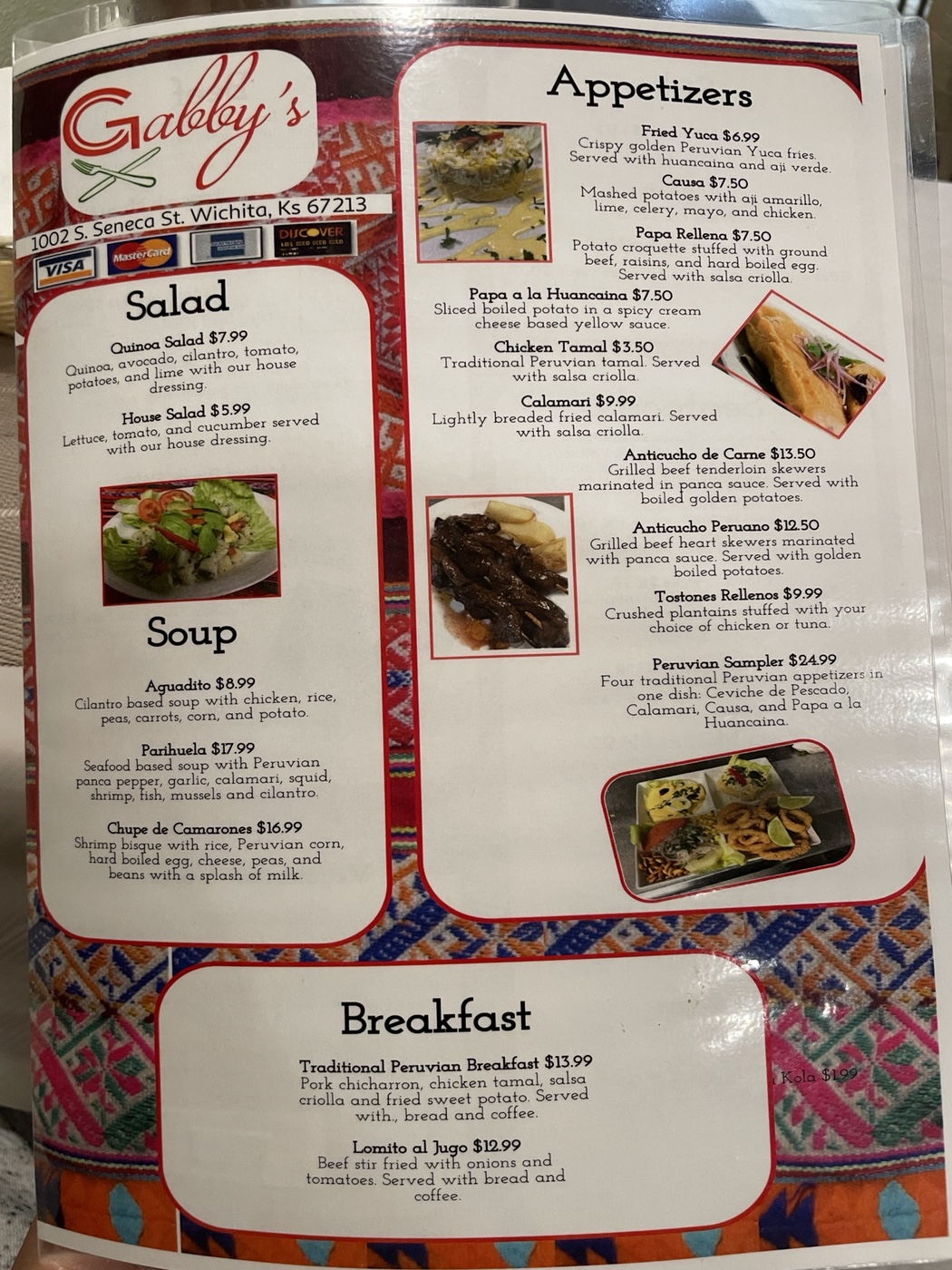 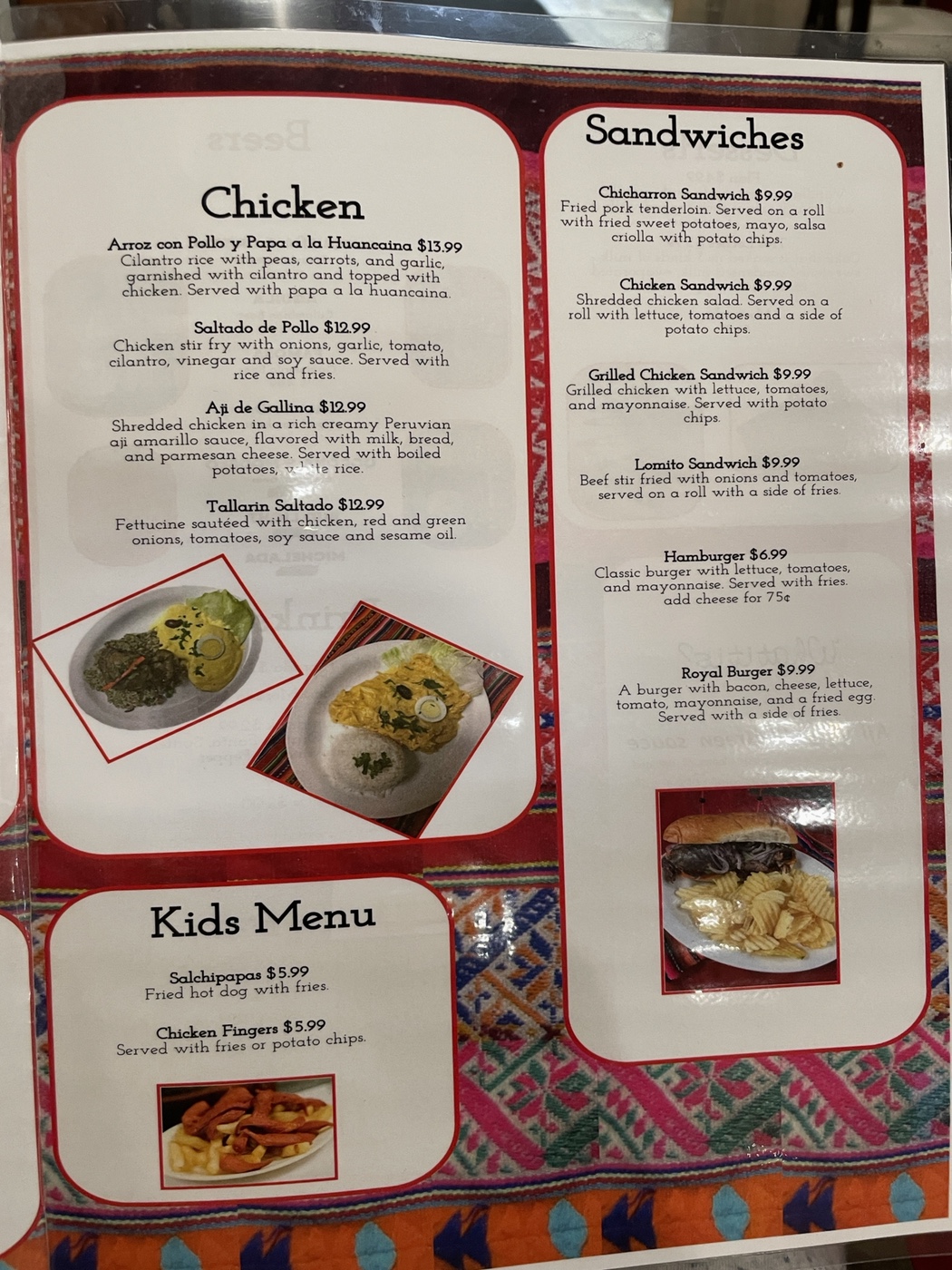 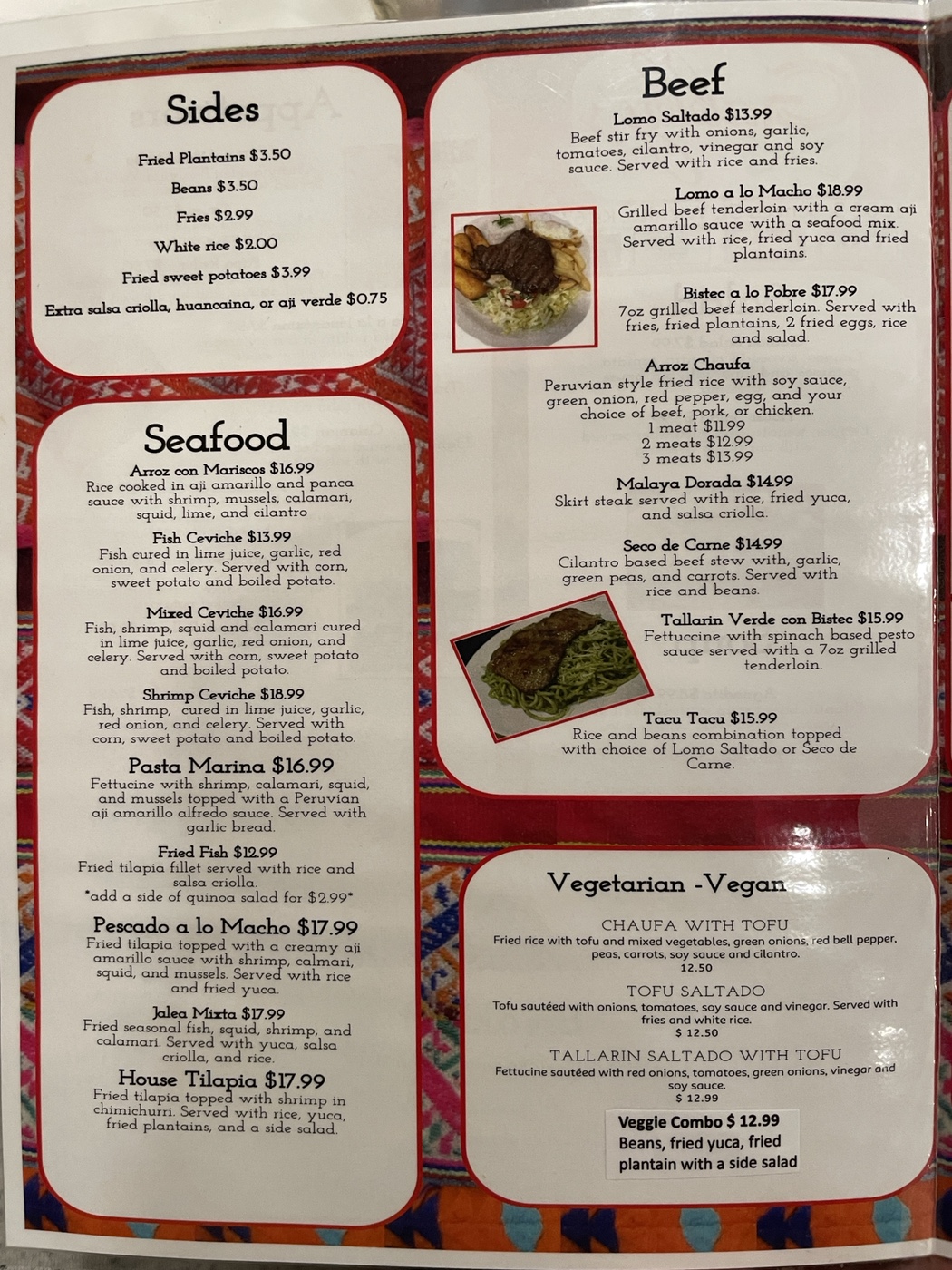 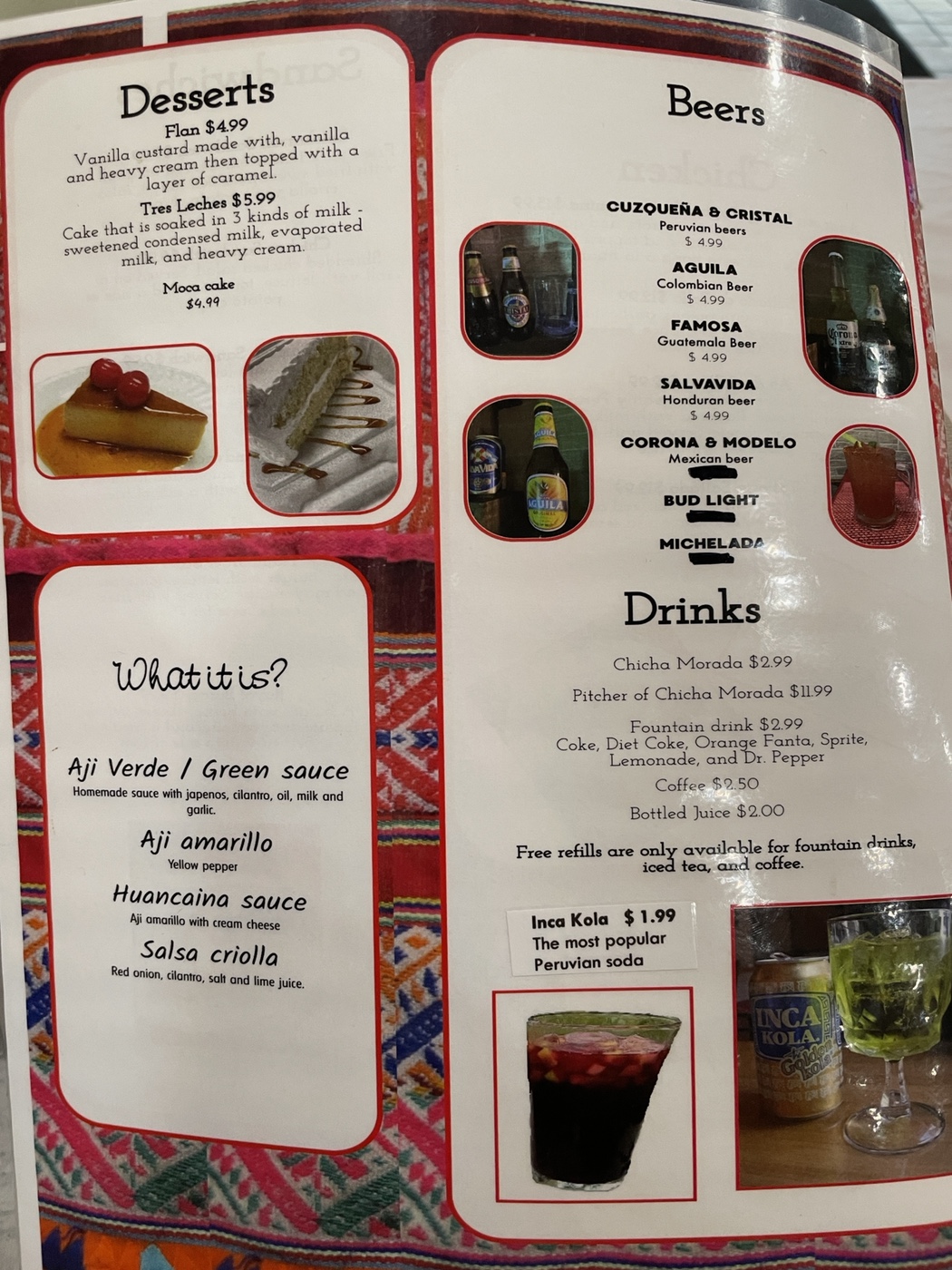