Some things in life aren’t meant to be. On Tuesday, we should have just stuck with Appetuesdays. We received some good suggestions for Letter D, many we strongly considered going to.

In the end, Letter D was just a disaster and disappointment.

So we ended up on Dolci and Joe’s. I checked their website. (http://www.dolciandjoes.com/). Looked up their menu and ran it all by Tiffany who seemed to like it. Their menu has their dinner times listed as Mon – Sat. 5 pm – 8 pm. For this week’s entry for Dining By The Alphabet, we had some guest eaters who wanted to join us. The plan was to meet at Dolci and Joe’s at 7 pm. On our way up there, we get a call from one of our fellow eaters, Ricky. He calls and says, “Did you do your homework? The place is closed.” Fantastic. We met them all up there and yes indeed, the place was closed. Sign said they close at 4 pm. What’s the point of having a website if you’re going to post the wrong times? My plans for the evening were now screwed up because I trusted a company’s website. I’ll be sure to let Dolci and Joe’s know about this.

So what I came down to was Letter D restaurants do not like to stay open late on Tuesday. We scrambled to find another D restaurant. Doc Howards, Doc Greens, Doc Steakhouse, but settled on the following place:

We had a group of six of us and the moment we stepped inside Da Cajun Shak we were met with “We don’t have room for you guys.” That was it. We. Don’t. Have. Room. For. You. Guys. Then “We don’t have enough to seat you.” I was taken back by this as I have frequented this place many times before and am a fan of their cajun meatloaf. We all kind of just stood there in amazement, not knowing exactly what to do. We discussed going somewhere else and then a few tables opened up that we could possibly put together so we asked. The response, “Not those two tables” (in a stern voice) “But you can those two tables”. Yes its Mardi Gras, you guys were busy, please don’t kick my ass.

This upset me from the start and kind of set the mood for the rest of dinner. Like I said, I’ve been here before and have had better and nicer service from the same people who seemed to have cracked under the pressure of having been busy. This was Tiffany’s first time in there along with a few others and this definitely didn’t leave a good first impression. One that may never be repaired.

So we sit, order our drinks. (FYI, they don’t serve alcohol here). We then look at their menu which can also be viewed online here. Unlike Dolci and Joe’s, i’m pretty sure this is right. We all decide to order some appetizers. Gator bites, fried catfish, and dippin shrimp. They come out in a pretty timely manner. Our server sets them down and we see fries also on the platter so we ask what was what. His response “gator bites, catfish, shrimp”. So………. I guess its a Surprise Basket or some sort of game where we get to bite and decide what we just put in our mouths.

We placed our order at the same time we asked for our apps. Tiffany and I split a three entree meal of Chicken Lafayette, Fried Catfish and Fried Gator with sides of Fried Okra, Jambalaya, and Seasoned Fries. Yes, our intention is to have a heart attack later tonight. We sort of messed up and ordered too many fried items and items similar to our appetizers. (Couple sidenotes: my favorite item is the Cajun Meatloaf but I didn’t want to order it again as I just had it recently and secondly, Tiffany isn’t a big fan of cajun food so take that into consideration).

Three of the guys with us all ordered similar type of entree meals as we did. Our friend Erica who was with us ordered a fried chicken tender po boy. 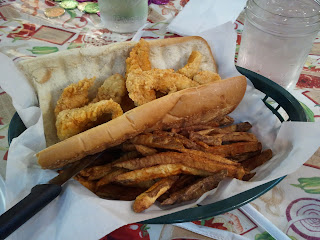 When the servers brought out our orders, there was confusion on who’s order was who’s. One of the ladies just stood there awkwardly holding the plate while others tried to figure out who’s order belonged to who. Real…………..awkward. So after that confusion we were all able to dig in.

Erica felt there was too much bread on her po boy and the other guys just ate away without too much commentary. Dave was pretty quiet regarding his food. The only comments I really got was Danny and Ricky and the food being fried and having to work out because of it. Was I just joined at the table by all girls? Later on Ricky (the reason why we chose to eat on Tuesday in the first place) would comment about how it was a very bad idea of going to Da Cajun Shak and redoing the letter D but that’s how it goes in the world of critiqueating.

But ultimately the review falls on the shoulders of Tiffany and I. I am a fan of cajun food and a fan of fried food (albeit not every single day of the week, in moderation my friends….. in moderation). I enjoyed each part of my meal besides the fries which were just not good. The chicken lafayette and jambalaya were pretty good for restaurant quality. Fried catfish and gator bites were a little above average. I didn’t get to try the okra cause somebody snuck them all inside her belly (in her defense, I was offered okra but passed). Tiffany had small bits and pieces of each meal but just didn’t like it. As was stated earlier, Cajun is just not her thing.

Da Cajun Shak really shot themselves in the foot earlier in the night with their approach to the customers when the seating wasn’t available yet. Tiffany said the best part of their customer service was refilling drinks. I’ve eaten here before and I don’t personally know the people but they seem like good hearted people but a little rough around the edge. Their people skills leave a lot to be desired. To their credit they’ve been serving Wichita for five years now, not many locally owned Cajun places in Wichita I could name. This is one of those places where you have to be a fan of this type of food to enjoy it.

On the Super Scientific Scale: Da Cajun Shak gets a 2.5. I gave the place a 3.5 and Tiffany gave them a 1.5. They were docked severely for their customer service.

So that was Letter D. Just a disaster of a day with dreadful and disappointing decisions. How’s that for alliteration?

Thanks to everybody who helped with suggestions for Letter D.

Wait…………………..it doesn’t end there. Later that evening we hoped to end it all on a good note. So for you lucky readers you get more D’s! A DOUBLE DOSE of Blogging. We wanted to get something sweet to snack on for later. Tiffany being the dessert queen still had an appetite left since she didn’t eat too much so we made a quick late night stop by……………………….

The Donut Whole is located on Douglas just east of Hydraulic near downtown. 1720 E. Douglas Ave Wichita, KS 67214. They are open 24 hours with their own drive thru. We decided to make the excursion inside the place and were met by an eclectic group of people of all walks of life. I’m guessing they have wi-fi here since a quarter of the crowd had computers out. This place only has donuts and drinks (once again, no alcohol).

We were given the suggestion that we should try the Maple Bacon donut. With how our evening has been, are you surprised they didn’t have any left? We’re not. Nearly all donuts run between $1.00 and $1.50 so we chose three donuts to take back home. Futter Binger (a play on butter finger), Rocky Road (marshmallow, chocolate and nuts), Peanut Butter Pretzel (pretzels and peanut butter and chocolate).

We decided to take bites of each one followed by a drink to cleanse the pallet. Until we get back, we noticed all of the donuts we ordered were chocolate cake donuts. The night just keeps getting better! Of course I didn’t use milk for my cleanser, I’d rather use gasoline. Our first donut we tried was Rocky Road. Pretty good, nothing too special. Next up….. Futter Binger. Disappointment. We couldn’t even taste any of the butterfinger on it. And the last one, the Peanut Butter Pretzel. Score. Finally we came up with a winner. This was by far the best of the bunch. All the donuts were pretty rich, not overly dry and probably better than what you could find at Krispy Kreme, plus the place is open 24 hours!

We will probably try this place again. Next time, we’re going to make sure we get a very unique assortment of donuts instead of all the same type. The price was pretty good and the service was a little awkward with the young lady at the counter kind of staring our way waiting for us. Felt sort of rushed trying to decide what to order and just didn’t have a pleasant attitude. Despite that final fact, Tiffany gave them a four and I ended up with a 3.

So that does conclude our Dining By the Alphabet Letter D. Kind of a car wreck of an evening that really just started off wrong with many places being closed and then Dolci and Joe’s with absolutely wrong information on their website.

Here’s to hoping Letter E is better. We haven’t even begun to think about what options there are for that letter but two things I know for sure. We will call ahead to make sure they are open and Letter E is the coolest letter in the alphabet.

7 thoughts on “Dining By The Alphabet: Da Cajun Shak and Donut Whole”