Choosing Letter C was quite the task for us this time around. We received the obvious suggestions like Connie’s, Cortez, Chester’s Chophouse. Even Chuck E. Cheese and Church’s Chicken which my girlfriend was quick to nix from the list. All poor to great suggestions on places to go. But these are places many people have been to and frequented. Copper Oven was a new one both of us have never been to but unfortunately for them, they are closed on Sunday and Monday.

We decided to go once again off the beaten path and try something fresh for a change. A place a little out of the way. Let me tell you the Letter C is very popular for Mexican food. Add in Cholitas, Carlos O’Kelly and Casa Martinez out in Derby and that’s five with the two aforementioned restaurants listed earlier. But we managed to find a new spot for the both of us. I bring to you guys…………………… 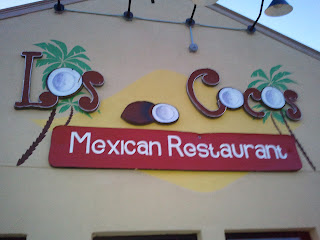 Yes, we recently had Abuelos a couple of weeks ago and decided it’d be nice to see how this place fared against a national chain. Plus Los Cocos usually isn’t one of the first suggestions that someone throws out when dining out for Mexican.

We arrive, and they look pretty busy judging by all the cars in the parking lot. Get inside and ask for a booth for two. The area is pretty wide open, and they place us in an area that is actually pretty cold. Los Cocos turned into Los Frios. Right after they seated us, we saw the host turn up the heat.

So, our server comes up to us and takes our drink order. On Monday nights they have $5 domestic pitchers and $7 import pitchers. We shoot right for the Tecate BUT they don’t have that on tap, so we settle for Miller Light. After the Abuelos little serving of guacamole, we decided to give Los Cocos a try for the same app. At roughly a couple of dollars cheaper, we received a bigger portion of Guacamole. The serving you see ran us around $3 and change. The beer was also served an extremely frosty mugs that turned our fingers to ice on the point of arrival. It was nuts how cold the mugs were….. or should I say “cocoNUTS!” The guac was pretty good but unfortunately, there was still big chunks of avocados in it, wasn’t chopped up as fine. Not necessarily a bad thing but a point of reference if you are picky about your guacamole. The salsa itself was good, not great by any means, had a special little zing to them. I asked our server for their hot sauce…….not a good idea. I love hot sauce, but it was a little too spicy for me. I took one bite and figured I didn’t want to lose my taste buds.

When our server comes back we ask the popular question of “What good?” Some servers at restaurants will blow the question off, some will say, “I don’t eat here”, some will blabber on not knowing what they are talking about. Luckily, our server was very helpful. She could point out bits and pieces from each part of the menu and tell us what was in it and what she thought of it. She was very insightful and helped me narrow down my suggestion. The two items we decided on, The Chimichanga and the Shrimp Tacos. Two items you could probably find on most, if not all, Mexican restaurants. I was close to ordering the Crab Enchiladas, but that didn’t seem like a good idea. I have to work tomorrow and not sure if I want any tummy aches to come and go during the day.

Co-worker: Whats that smell? Smells like an awful mix of crab and enchiladas!
Me: “Yeah it does, no idea where that came from (rolling eyes). At least its not crab and beignets!

We get back to our drinks and complimentary chips and salsa, just chit-chatting, and before you know it our food is already out. We must say throughout the night the service was excellent. Abuelo’s could really learn a thing or two from The Coconuts or for our Spanish-speaking readers, Los Cocos.
Once the food arrived we do our obligatory first bite of our own meal and exchange portions of the meals. The shrimp tacos were just excellent. They tasted fresh and beat anything you can get for 99 cents at Taco Bell. My girlfriend enjoyed her chimichanga as well. The rice. Muchos Delicioso. Some of the best rice I’ve had at a Mexican restaurant, and she shared the same sentiments. Her beans though…..bland. She did not like them at all and when I tried some of it, I thought I was eating melted cardboard cause yes I know what melted cardboard taste like……

Overall the food was pretty good. Above average but not excellent by any means for everything we got. Some parts of the meal great, other parts… bland. Was it worth the money? Yes. But it didn’t end there, we wanted to have the full-course meal and tried out some dessert. I’ve never had a sopapilla before, so we figured they’d be our best bet. Our server explained a sopapilla as a fried donut rolled in cinnamon covered in a honey and chocolate glaze. My girlfriend tried to put it into laymen terms and say imagine a type of “beignets”. I literally almost crapped my pants upon hearing “beignets”. But rest assured sopapillas are not beignets, they are their own type of pastry. So being the adventurous type, we ordered them. Smart decision.

The whipped cream spread on top of the sopapillas and then wiping each piece along the plate that had the honey and chocolate glaze all over it was “yummy in our tummy”, the bomb.com and totally radical all rolled into one. I was told On the Border offers these too but are much smaller. An excellent way to end the meal and a perfect substitute for a sleeping pill because I feel like I’m in a sleepy trance writing this right now. (Editors note: The other half is already crashed out).

We received our bill. And dinner for two, drinks, appetizer and dessert….$30. Not too bad for everything we got. This is taking into account we spent around $30 for just two meals and one appetizer at Abuelos for below average food. The service here was just top-notch, prices extremely affordable and the food above average and just below excellence. On Mondays, kids eat free. I went into this with a plan to pretend I was a kid because I might be able to pass for one but decided that’s not what a professional writer would do.

On the (soon to be patented) super scientific scale we gave this place 3.75 stars. That’s a 3.5 from the lady and a 4 from me. This is definitely a place we’d suggest to others.

So, ladies and gentlemen, that is Letter C. Up next on the alphabet chain as we’ve been told by our Kindergarten teachers long ago…….The Letter D. Not 100% sure what Letter D brings us yet. We have some ideas but are always open to suggestions. We will have some “guest eaters” with us to help us explore the menu even more and try an additional appetizer or two. We look forward to it, and always thank you for checking out Wichita By EB.com.

0 thoughts on “Dining By The Alphabet: Letter C – Los Cocos”