With Tiffany stuck at work, I was tasked with the job of heading over to the Central and Rock Dillon’s to try and purchase some White Castle burgers to see if it was worth all the hype.

White Castle was scheduled for 4-6 pm. Only two hours which still doesn’t make sense to me especially for only one location. I think having a handful of locations for a little more than two hours would have been nice. But what do I know. I’m sure there were many variables that prevented that.

No less than five minutes after that, I get a text from a friend that reads “I heard on the radio there are already over 1,000 people in line.”

Hmmm……well that exceeds my limit of 50 people I had set. But the crazy person inside of me just had to go see it. The area was on my way home so it didn’t hurt to stop by. So heading towards Rock and Central, I could see lots of cars ahead of me slowing down towards Dillon’s and putting their turn signal on. Then I could see some cars starting to back up. As I approached the grocery store parking lot, it looked like a Wichita River Festival concert was about to take place. Every news station had their vans set up. Nearly every parking spot was taken. People were just walking around everywhere. 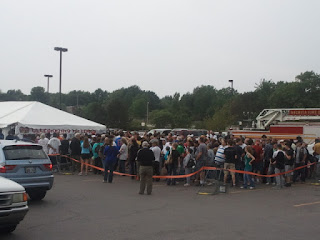 I get there about 5:05 pm and have to park all the way over at Chili’s. The tent is set up near the gas pumps, just southwest of it. The line is crazy long. Yes probably 1000 people there. I take a picture of the craziness.

Then I’m thinking to myself, there is only 55 minutes left for this shindig. The line is not moving whatsoever. I have a life outside of this I can probably get to. Game Two of the Dallas Mavericks/Oklahoma City Thunder is going on in a few hours. 2 burgers for 90 cents when you can only order 4 burgers…… 55 minutes of wait for a chance to get 4 burgers which will probably run out…..

So sorry everybody, nothing else to report. I read on Kansas.com they had 5000 burgers on hand that were being grilled by the Wichita Fire Department.

Maybe this is a good sign for Wichita to tell White Castle we want one here. Doubtful it’ll happen though. When I’m in St. Louis next year for the MVC Basketball Tournament, I might have to try White Castle while I’m there.

In the meantime, Dillon’s does carry frozen White Castle burgers you can pop in the microwave for double the cost but no lines. I bought some actually a week ago; still sitting in the freezer. When I learn how to use an oven, I might blog about my life-changing burger experience.

Have a great weekend all.

P.S. – Totally off-topic but R.I.P. “Macho Man” Randy Savage. Any guy my age had a high probability of growing up watching him wrestle. Very polarizing personality that drew everyone’s attention.

Due to COVID-19, there will be no peeps at Halloween this year

Looking for a commercial kitchen to rent? Reverie Coffee Roasters has you covered