We had a chance to try out all sorts of different places this weekend. Three actually and those places were Mike’s Wine Dive, Red Robin and CherryBerry Self Serve Yogurt Bar.

I was only able to take pictures of CherryBerry. The other two places, I was so busy that it slipped my mind to take pictures. Here are some quick thoughts we had on the places we tried out over the weekend.

Mike’s Wine Dive
We reserved their little “banquet room” which is located downstairs. It’s dark down there but not too dark to where you can’t see. It’s dimly lit and one of our friends compared it to a “mafia room”. Its like a wine cellar down there, you can see where a bunch of wines are stored. The little room seats around 14-16 people.
A handful of us ordered the Kobe Burger including myself with fries. Tiffany went with the Salmon Burger. Both items run around $11-12. These were popular suggestions we’ve heard from others. Beforehand, we had a house salad with their vinaigrette dressing which was delicious.
I stuck with a couple vodka presses for drinks and Tiffany went the moscato route. Our server was very friendly and did a great job. The food was delicious. I really liked the Kobe burger, it’s actually the second time I’ve had it. I wish they could have supplied some more fries as the side serving was rather minimal. Tiffany enjoyed her salmon burger. All in all a great time.

We were able to bring in our own birthday ice cream cake as a surprise. We stored it in their freezer and the server put the candles on them, lit it, and brought the cake down to us. He then cut it for us and served us all. Very nice touch and something he certainly did not need to do.

I was hesitant at first going there but this was our second time. So they’ve had two chances to make an impression on us and they succeeded. Job well done. Highly recommended.

I managed to take some pictures for everyone here. This is one of the newest frozen yogurt places to open up. Only difference, this location is in Derby on Rock Road.

Place is a little smaller and narrow. The serving machines are all the same. They offer some different flavors like Rocky Road and Cookies and Creme. We sampled them and weren’t too impressed. Plus the machine serves the frozen yogurt extremely slow. At an Orange Leaf or Yogurt Xplosion (I feel dirty just typing that); the yogurt comes out pretty quick when you pull down the lever. At CherryBerry, the froyo comes out pretty slow. And when I say slow, imagine a 90 year old lady on crutches and roller-skates serving you at Sonic. PRETTY SLOW. Their froyo seems much “harder” or “icier” than the other two establishments. I guess the difference is because CherryBerry doesn’t use a mix to make their froyo; they make theirs from scratch.
Plus with the toppings, they have some in the bowls where you serve yourself but they also have a bunch in these canisters. You have to spin this little wheel on the canister at the bottom to dispense your topping. That too would at times get clogged up or slow moving so you had to tap it or in my case, smack it, to get the toppings to come out. Two minor conveniences in “self serve” between that and the speed of the froyo machines. There were plenty of toppings to choose from. 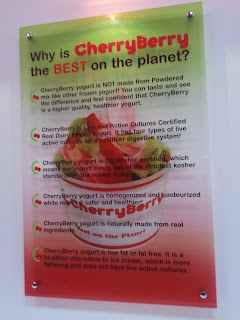 One thing some of you waffle cone fans may be upset with is they do not offer any actual cones that fit inside your cup for froyo. Nor any ice cream cones. At the cashier’s station though, they do have broken up cones you can put inside your cup. I tried one and come to found out they were pretty stale and chewy. Upsetting for myself since I love waffle cones.

After we sat down, we started eating it all up and you could tell a noticeable difference between CherryBerry and Orange Leaf. As I mentioned earlier it’s harder and just doesn’t come off as creamy as Orange Leaf. This is all directed to how CherryBerry’s yogurt is prepared. So if that’s the type you like, this is the place for you. Since we’ve become fans of the other style, we much prefer Orange Leaf to CherryBerry. To put it bluntly it was said, “We will probably never go there again.” 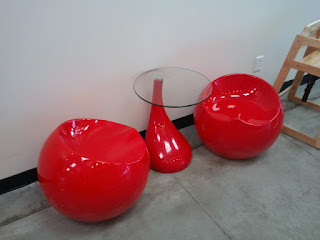 If you sign up for Red Robin’s online club, you get a free coupon for a free burger on your birthday. So we stopped by Red Robin over the weekend to cash in on the free burger. It was each of our first time at Red Robin in quite a long time. Upon walking inside the very first thing I noticed is the “Out of Order” signs on all of the arcade machines. Now, I had no intention of playing their arcade games but it just struck me as odd (Yes, I love videogames). Another person over on facebook mentioned she was there a month ago and saw the same signs. Just something to make note of.

At Red Robin, you get unlimited fries. I like their seasoning so I just wanted fries for my seasoning. Not sure if it was because they were somewhat busy but our server was pretty slow on giving us refills on fries. Actually he never even asked when our bowl was empty. We had to actually ask and when we did, he brings us a second bowl……..empty. I think he thought we wanted a separate bowl but our other bowl was about empty. Just figured common sense would assume we wanted more fries. Oh well. We would be near empty on fries again. He creepily walked by us, stood there for an awkward second or two and said, “It’ll be a minute.” After a while, we had to grab somebody else for more fries.

Then there’s the order. Tiffany ordered a burger and I had one of their spicy burgers. Both ok, nothing to rave about. Certainly not better than the burgers we had at Mike’s Wine Dive. Red Robin’s burgers run around $8-9 for what we ordered.

The service there was nothing to rave about and on the verge of annoying at times. Like I said, not sure if it can be attributed to the fact that our server had a party of 8 right by us. Still not impressed. Probably won’t go back until April when its birthday time again.

Plus if kids annoy you, avoid. This place is packed with them. Imagine Chuck E. Cheese but with broken arcade machines and burgers. That’s Red Robin for you. Oh wait, Red Robin has a pretty extensive bar but we didn’t see too many people drinking. We’ve both been to Red Robin before.

To let you in on my very first experience at Red Robin…..

I go there with some friends when they first opened. I asked our server what’s good to order and her response?

“I honestly don’t eat here. I’m not a big fan of their food.”

WOW! At least I appreciated the honesty. That sums up Red Robin for me. That was the weekend of dining for us.

This week, hopefully we can knock out some Letter I action for everyone! Suggestions are always welcome for the letter.

Don’t forget White Castle comes to Wichita this Thursday and the much anticipated Twin Peaks opens up on Tuesday if you’re into that.