We are officially into the second half of the alphabet. Thanks to all those who have joined us in traveling through most of the alphabet. If we were in Hawaii, I’m pretty sure the Dining by the Alphabet would have been done by now seeing as how they don’t carry all the letters in the regular alphabet.

Letter N was kind of impromptu. In deciding the restaurant, I wanted to do something different. N&J was a very popular suggestion but I’ve been to many Mediterranean spots. Newport was another, but I touched upon Newport before. Noodle’s is a chain but it’s also been a topic of a blog in the past. So what’s that leave us?

Well none other than a Wichita original!!

According to Wikipedia, they famous for its loose-meat sandwiches and root beer. The sandwiches are similar to what is known in the Upper Midwest as tavern sandwiches and the ones served at that region’s Maid-Rite restaurant chain.

They opened up in Wichita on West Douglas in 1930. They are most famous for their loose-meat sandwich which comes topped with pickles, diced onions and mustard. They have five different locations in Wichita which are as follows:

Their slogan is “Crumbly Is Good” so we decided to put that to the test.

My guest diner for this adventure was Leslie. This was her first time ever attending NuWay. I’m pretty sure upon finding out that her letter was going to be NuWay she was kind of let down. I told her to keep her spirits up and enjoy the fabulous meal ahead of her. 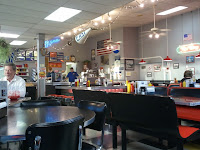 Upon stepping inside, you’ll notice it has your old fashioned diner look. Leslie noted that the average age inside was probably both of our ages added together. That is probably true. Outside of a couple grandchildren inside, we were by far the youngest inside. We sat ourselves and waited for bit. After about 10 minutes (which could have been a little shorter), we were greeted and our orders were taken.

We both went with their most popular item. A Medium NuWay (burger) with fries and a root beer. We also ordered a side of onion rings. I ended up switching my fries to tots to spice things up a little. Exciting, I know.

The root beers came out first. They usually come out in a frosted mug but this time they did not. I think I heard one of the servers telling another couple that they were out. Not sure how that could be considering the place was not busy. So we were stuck with regular mugs that weren’t chilled. Kind of upsetting to be honest with you. Regardless, the sentiment was shared that NuWay had the best root beer in all of Wichita. They make their own root beer and it’s heaven. If I had to list my current three favorite beers right now, it’d be Halcyon, Stella Artois and NuWay’s Root Beer. Leslie enjoyed hers quite a bit. And another note on their root beer: I had a friend in town for the weekend and she actually purchased two gallons worth to take back to Texas for her and her family. They even had frosted mugs at home in preparation for the arrival of the goodness that is a NuWay Root Beer. 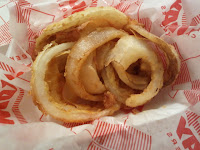 Shortly after, our meals came out. A NuWay burger, fries and the onion rings. I guess our server didn’t take note that I switched my fries to tots. Actually I’m 100% sure because he never used notes to take down the order, nor did he have a friendly demeanor about him. So I just let it be and said forget it. We dipped into the homemade onion rings. Talk about greasy. They were good but not great in my opinion. Leslie seemed to like them more than me. We ordered the smallest size they had which ran $1.99 so that was enough for two people.

Next up was the moment of truth. The NuWay burgers. Is crumbly good? I put some extra ketchup on mine because that’s how I like my NuWay burgers. I’ve been here before so kind of know what to expect. Leslie took a bite into hers and I anxiously awaited her expression. As I write this, I am still waiting for an expression. She didn’t seem too impressed or upset by it. It was more like, “That’s it?”. She’s heard about NuWay before but was giving into the hype. She said it was just a burger with ground beef inside followed by an “I’m not too impressed.” I, on the other hand, finished my burger pretty quickly. I like NuWay burgers but let me say they are good, not great. Thus why their slogan is “Crumbly is good”, not “Crumbly is out of this world”.

Overall the service was less than spectacular. It’s an easy job to do there. It took a while for our server to come and refill our drink, our server did not look happy to be there whatsoever, which is important. He was just going through the motions. I noticed another server who was ten times more pleasant. He didn’t give me tots which I’ll let slide, I won’t fall to the ground and throw a temper tantrum over it.

The food overall, in my opinion, is good but not fantastic. It’s something I can eat once a month but that’s about it. Leslie wasn’t that big of a fan. If I had to break it down, NuWay is like beer or Jean-Claude Van Damme movies…….. It’s an acquired taste. You may not like it the first time but through time, you may. (Well Bloodsport isn’t an acquired taste, that movie kicked butt the first time I saw it many moons ago).

Price wise, it’s pretty cheap. It’s comparable to any fast food joint. A burger, fries and a drink will run you about $5. Our tab ended up being around $15 which included tip.

After some discussion, we both came through with our final score. Taking into account, price, quality of food, service, I gave NuWay a 3.5. Like I said earlier, it’s good but not great. Leslie wasn’t as kind. She gave NuWay a 2 saying the saving grace was the Root Beer. The final score for NuWay on the Super Scientific Scale is 2.75.

I’m still glad I stopped by there though. It’s a Wichita Original and something that’s been here longer than most places. It’s not for everyone but the people I do know that like NuWay, love it. If nothing else, go in for a root beer.

Up next I should have a brief synopsis of the new U Grill that opened. I was fortunate enough to stop by the day after they had their “Soft Opening” to see what they had to offer. That should be up soon. Also start bringing on those suggestions for Letter O.

AND another reader’s grab bag should be in the works for the next week or so. If you have anything you’d like to add, just shoot me an e-mail: wichitabyeb@gmail.com – We’re looking for your thoughts, experiences, and opinions on some of Wichita’s local restaurants.