The 15th letter of the alphabet is upon us.

While trying to decide where to go, I unfortunately had to take into consideration my Project Vegetarian currently going on. I have two days left to go to complete my mission and didn’t want to cheat. So one of the options I was considering, Oasis, I had to knock out because I heard you have to try the burgers there. The other option I was wanting to go to, Old Mill Tasty Shop is only open for lunch during the week.

But then while looking around; I noticed there just happened to be a vegetarian restaurant that begins with the letter O. Then I thought to myself, what would “Macho Man” Randy Savage say when choosing a restaurant?

He would start off by saying two words: “OHHHHH YEEEEEEEAAAAAAAAHHHHHHHH”

They are near the northwest corner of Rock and 29th street. They’re in that shopping center where Sprint and Il Ponte Cafe are located. This was formerly known as Zen (a vegetarian restaurant) but changed their name and included meat on their menu.

My guest diner for this evening was Megan. She’s a first time guest diner for Wichita By E.B. Ironically enough, she’s ran into me on a couple other blogging excursions so it made sense to just have her aboard for Letter O.

Upon arriving, we were greeted and seated. There were two other couples in the establishment so it wasn’t very busy when we got there. Throughout the night, I’d say probably 10 or so other diners would drop in. The place looked pretty fancy inside and was very quiet. Quiet to the point you could at times hear others talking. Just my personal preference, but an atmosphere like that could use some light music playing in the background. Nothing too loud but just something to clear the white noise. 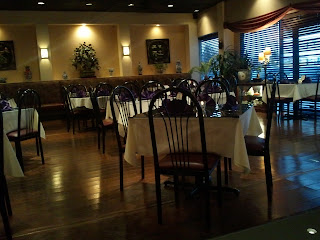 To start off the night, we ordered the Thai Spring Rolls for an appetizer and a bowl of Hot & Sour Soup for me and Egg Flower Soup (a fancy name for Egg Drop Soup I suppose?) for Megan. To note, all soups are available in vegetarian style except their seafood soup).

They have a handful of other vegetarian appetizers like Soy Nuggets (lightly fried Soy Nuggets), Salt and Pepper Tofu cubes, Seaweed Medley, Garden Tempura and a host of others.

The server came out and brought out our soups which were both delicious and priced right. During this time, our server informs us that they were out of the Thai Style Spring Rolls and suggested the Horizon Spring Rolls (variation of the traditional spring rolls made with napa, carrots, celery and thin noodles). I was very indifferent so we went with those as the substitute. A short while after those came out and were burning hot inside. Megan took the first bite and you could tell the instant she bit in, they just came out of the fryer. Soooooooo I waited a while to bite into mine. The spring rolls came with two different sauces, a sweet and sour sauce and a mustard/wasabi mix. The mustard wasabi mix should be FDA approved to clear stuffy noses. Or wasabi in general should be. Once the spring rolls cooled down a bit, I took a bite into mine and it was very delicious. Megan recommends the sweet and source sauce over the mustard/wasabi mix. I do too as well.

During this time, we were ready to order our entrees for the evening. Megan knew right off the bat she was going to go with the Orange chicken (deep fried ingredients stir fried in spicy tangy orange flavored sauce). I briefly told our server I was doing this whole vegetarian for a week thing and asked for some suggestions. He did inform us earlier it was his first day on the job but he did work when Oh Yeah was Zen Restaurant. So I asked what he would have chosen since many of the Zen menu items were now on the Oh Yeah Menu. He suggested the Phad Tai (Thai style stir fried rice noodles with bean sprouts, eggs, and peanuts). It came with tofu that could be cooked to my liking. He recommended the best tofu route to go was the steamed tofu with the Phad Thai. It sounded alright to me, I was prepared to give tofu another shot.

Finished the rest of our soup, server came around with constant refills (great job there) and dinner was served!

The Orange Peel Chicken just looked delicious. It came with a side of rice. The temptation was nearly killing me to try a piece of chicken but Will Power won that battle. Megan mixed her chicken and rice together and was ready to go. After a few bites she mentioned how good it was. She said she would definitely recommend the orange peel chicken and that it was just as much as you’d pay at PF Changs.
I’m a big Pad Thai fan (or as “Oh Yeah” spells it Phad Thai) and was anxious to see how Oh Yeah’s fared compared to others I’ve tried in Wichita. When it was placed in front of me, I must admit, the tofu did not look tempting. I had to place it all on another plate because I wasn’t sure I was ready to eat all the tofu placed on top of the meal. I bit into the tofu a few times and I have to admit, it’s just not my thing. Megan tried it as well and ended at one bite. I decided I’ll just eat the Pad Thai meatless and rate my meal solely on the Pad Thai. Halfway into my meal, I just wasn’t impressed. My Pad Thai looked very mushy and soggy like the noodles were boiled for too long. Taste-wise there wasn’t much flavor to it. Wasn’t spicy, not that it was supposed to be. A blank aftertaste. Just kind of bland in general. I ended up not finishing my meal out of choice not because I was full.

While “Oh Yeah” is a Chinese/vegetarian restaurant, it’s really just seems like a Chinese Restaurant with vegetarian items here and there. Any meal can be made vegetarian style by going meatless or with tofu.

The service was great even if our server had only been there one day. He would try to ask any questions we had and ask someone if he didn’t know the answer. Drinks were constantly being refilled. The timing of order of meal to receiving the meal was spot on.

Unfortunately for me, I wasn’t impressed with the meal but Megan was happy with what she ordered. Like any dining experience, your perception can change based on what you order. Last night, it was a thumbs down for me and a thumbs up for Megan.

All the pricing was very comparable to any Chinese restaurant. Both entrees were around $10, the soups were $3 a piece and the appetizer was $3.50. Total bill came out to $31 and change before tip.

So the moment of truth. What to rate “Oh Yeah China Bistro”?

After some thought, Megan decided to give Oh Yeah a 4 based on everything from value to service to food quality. Myself, I gave this place a 3. My thinking was Service was great. Value was alright. The app was good but not great for two spring rolls for $3.50. The soup was delicious but the entree failed to deliver and for the most part, that should be the best part of the night. Maybe I’ll come in again and try a different meal if I’m in the area.

I want to thank Megan for being my guest diner on Dining by the Alphabet.

6 thoughts on “Dining by the Alphabet: Oh Yeah!”