Every now and then, it’s good to get outside of your comfort zone. Humans are creatures of habit. Some people when they go out to eat only order the same thing. Some people will only eat at the same place or from a list of a couple places.

For Letter P, I wanted to try something different. Go to a place I’ve never been before. Go to a place, I’m not sure if 90% of my friends have been to. Try some food that I’m not really familiar with. So that brings us to our choice for Letter P:

My guest diner for this go around was Jenny. She’s a first time guest diner and also new to Indian food.

Passage to India recently moved to its new location which is in the same little area as Spangles, Subway and some little club that has 3 for 1’s on Tuesday. Never been to or heard of the club before but 3 for 1’s??? That brings me back to the Kelly’s Irish Pub on Wednesday nights in college!

The moment you walk in, the place is very well maintained. The decor was what I expected to be inside an Indian restaurant. They had one TV on with what looked like India’s version of MTV. Based on the music selection that was playing, there was no Beiber Fever going on! 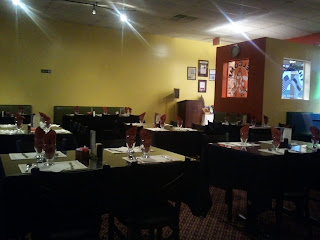 When stepping inside, I had no idea what Indian food really is. Admittedly, Jenny was pretty scared as her original impression of Indian food wasn’t good. I know they have lots of dishes that have the word “curry” in it. I don’t know what it is. Jenny googled it and we still couldn’t figure out what it was.

Our server came up, greeted us, brought us out some waters and presented the menus. He was very friendly and would remain that way throughout the night. Always making sure everything was ok, our drinks were refilled, etc. He answered any question we had and never looked annoyed by the insanely amount of questions we had.

We wanted to start off with an appetizer and he made a couple suggestions for us. I think we wanted to go with something “safe” just in case the entree we ordered we didn’t like too much. We ordered the #5) Chicken Pakora (breast of chicken stripes. with homemade butter) their chicken strips which looked like spicy chicken nuggets. Jenny’s initial reaction was that it tasted like a gizzard. I was kind of weirded out by the taste at first. It didn’t taste like chicken; the feel was too tender. Don’t get me wrong, I enjoyed it; it was not bad but the texture shocked me originally. The chicken strips came with two different sauces: a garlic type sauce and a sweet and sour sauce. We both agreed the sweet and sour sauce was much better.

Now it was time to order an entree. I looked through it all and wanted to order something from the lamb/beef portion of the menu while Jenny was going to stick to the chicken side. Based on our server’s suggestions, Jenny went with the #45 Chicken Tikka Masala (boneless chicken sautéed with tomatoes and light cream curry) with mild sauce. I went with the #34 Palak Ghost (lamb cooked with fresh spinach) with medium sauce. All entrees were offered mild, medium or hot. Both items also came with a bowl of rice.
Our entrees came on in a timely manner. Jenny’s dinner was something she had never seen before (I was the same way with mine). We both had no idea what to expect and the meals weren’t what we envisioned them being. The serving styles are those like P.F. Changs. It comes out in a separate bowls and people can share meals together. Jenny’s meal looked like tomato soup with chunks of chicken in it. Her first bite she mentioned was scary but after a few bites later and combining it with rice; it wasn’t so bad. She was pretty full after eating half of her meal.

Now if that meal looked intimidating, mine was a bit worse. The moment it came out, I was thinking to myself, “What did I get myself into?” The lamb mixed in with fresh spinach looked like an alien was shot by a laser gun and the alien disintegrated into what would be known as my meal. Seriously if you’re bothered by texture or look of a meal, this may not be the best for you. I came in fully expecting the unexpected so was ready for what was to become. Took my spoon and cut a piece of lamb in half, mixed it in with the spinach. First bite in……. WOW it was spicier than I thought. That first bite required some water but after that I was ready for the spiciness. Second bite in, I thought to myself, “Hey this isn’t too bad.” After a while, I started to enjoy my meal. I just had to get over the “weirdness” of it all. I wasn’t a big fan of the rice, it was too hard and dry but I guess that’s the style of rice they serve. I finished about 3/4’s of my meal before I was full.

For those of you who haven’t tried Indian food, I’d recommend it at least once. Jenny and I were talking and we’re not sure if we’d ever return again. Not cause it wasn’t bad, but it just wasn’t our thing. I did notice they have a full lunch buffet during the week and that could be a good time for any of you to give it a try. You could sample a bunch of different items.

Like I said, the service was spot on. The prices were comparable to many dinner establishments. Both entrees ranged around $11-13 and the appetizer was in the $6 ball park, I forget. The total bill of the meal not including tip came out to be $31 and some change.

Jenny thought about her review overnight. She told me the next day she ended up giving Passage to India a 3. I eventually went with a 3.5. I went back and forth on 3 and 3.5 but settled on the 3.5. My deciding factors went to I’m not sure if the meal was worth the price paid. The service was great and the food quality unfortunately wasn’t my thing; nor was it Jenny’s. So the final score for Passage to India. 3.25

I’ll be taking the week off again as I’ll be heading down to Puerto Rico to see the Shockers play in the Puerto Rico Tip-Off Tournament. For those wanting to watch, it’s on ESPNU this Thursday at 6:30 pm CST. After that, it all depends on whether we win or lose.