What’s Justin Bieber doing messing with the Mariah Carey classic “All I Want For Christmas?”. Sounds like there are two girls singing that song now.

Ok, that was totally off subject but something I just had to get off my mind. On to more important matters such as eating food which is actually what I did a couple days ago when I continued my journey down the alphabet to Letter Q.

After searching through every single restaurant directory I could find, I came across only two places that began with Q. Quizno’s and Quincy’s Bar and Grill. Probably 3 out of my total 5 readers have been to Quizno’s so I went the other route. Ladies and gentlemen, I bring to you Dining by the Alphabet, Letter Q:

Quincy’s is located at the corner of 21st and West St. You can’t miss it. They are open seven days a week. Sunday – Tuesday 11 am to Midnight and on Wednesday – Saturday 11 am to 2 am.

My guest diner for Letter Q was Megan. This is her second go around as she originally joined Wichita By E.B. for Letter K (Kanai). A few other friends joined us when they found out we were going to a bar.

The place was pretty busy when we arrived a little before 7 pm. Maybe it’s because there was a KU game that night because the Evansville/North Carolina came surely wasn’t bringing in the viewers! The area is pretty big. Plenty of seating, pool tables, dart boards, some video game machines and beer. Gotta have the beer! Definitely a good bar atmosphere though. Looked to be a lot of regulars inside. I wish I wasn’t wearing slacks and a button down from work……….. 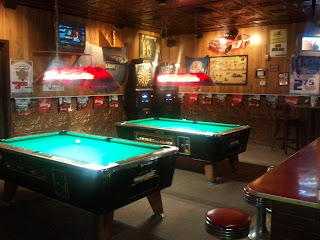 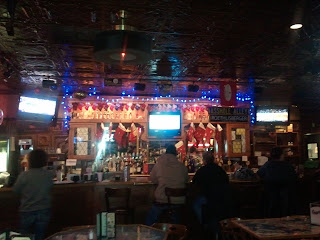 Megan mentioned she liked the atmosphere. There were several tables that could accommodate 8-10 people which is nice especially when you go out with a bunch of friends. It would be a great after work watering hole or dinner and drinks with friends.

When we walked in, we just sat ourselves at a big table. Similar to what you would do at most bars. Our server came to us and immediately took our drink orders. Fat Tire pints were on special for $2.75 that night. Why not?

After we received our beers we decided to take a look at the menu and order some appetizers. Seriously a blind person could read the menu. The menu is large. Have you ever seen that Burger King commercial where the guy with small hands couldn’t hold a whopper? Same deal with this menu.

We asked our server what her favorite or most popular appetizer was and she pointed at the Jalapeno Howlers (“Mild jalapeno peppers stuffed with cool cream cheese, breaded and golden fried. Served with Ranch dressing”). I decided to go with that. One of my other friends who decided to join us ordered the Buffalo Wings (over a half pound of crispy jumbo wings served with our secret Buffalo sauce). And another friend had the Cheese Sticks (crunchy on the outside, warm and melted on the inside. Served with warm marinara). It did not take long for the appetizers to come out. She brought out our three apps quickly but forgot one things, plates and silverware. Probably a mental error.

Of the three the Jalapeno Howlers were my favorite except when I bit into it, I’m pretty sure I burned my mouth. My appetite has no patience and burning my mouth over and over is a consequence of that. Others commented they liked the wings the most. Nobody said the cheese sticks were great which brought up the conversation, “Is there really such a thing as a really good cheese stick?” Regardless, it was your typical bar food. They didn’t excel in any of the appetizers but none of them sucked either.

Took a bit to get the server to come out and get our dinner order. I originally went with the Prime Rib Sandwich because it said on their menu “Our Most Popular Item”. But then Megan ordered the special which was a sirloin steak and shrimp that came with two sides for $10.99. Then another person answered. I fell to the peer pressure. I changed my order and went with hash browns and a fully loaded baked potato. Megan ordered a potato and fried cauliflower.

Food came out and it was time to chow down. Everything looked delicious when it came out. The baked potato had little bits of bacon in it and a side of sour cream and butter. Stuffed it all in there and went to town on the baked potato. I was hungry to say the least. While I was getting baked potato wasted, Megan bit into her shrimp and enjoyed it. She mentioned the jumbo shrimp was juicy and not over cooked. We both admitted the steak was a little tough but cooked medium rare as ordered and seasoned just right. I still finished the steak and it filled me up. A third friend who ordered it said he liked his steak and probably one of the best he’s had in a bar. So take that for what it’s worth. My hash browns were not that good. They were pretty soggy. One of Megan’s favorite parts of the evening was the fried cauliflower. I think she may have said that a few times how much she loved cauliflower. I wonder if any Halloween costume stores are still open because I’m considering buying her wax cauliflower ears for Christmas.

The total ticket between us for a few drinks, two specials, and a side was $42 not including a tip yet. The price was on point. For everything we ordered, it hit the spot. We could have easily ordered sandwiches or burgers for much less. The beer specials were nice and the app prices were in the $5 range. All of the food that came out was hot and fresh. Megan did say that was some of the best far food she’s had in a while. It was a comment shared by others at the table. She gave both the food and the price individual 4 stars.

The worst part of the night was probably the service. They had two servers to the entire bar which I think was enough for the amount of patrons inside that needed to be served. She was a bit slow to get us what we needed, aka not very prompt. Megan thinks she could have done a better job on selling the menu.

Megan commented on one last thing which is funny because one of my readers said “You should totally rate the bathrooms.” Megan mentioned the bathroom was less than clean, kind of a turn-off. I’ll agree one of the worst things a restaurant can have is a bad bathroom. Take Sumo for instance, bad service but their bathrooms are very clean.

I want to thank Megan for joining me on Dining by the Alphabet Letter Q. Always a great time hanging out with her along with the other friends who accompanied us.

Up next is Letter R. I’m hoping there are more options than just two for R.