Can you believe 2011 is almost over? I want to first thank all of you for stopping by to read. It’s been a great time writing. It’s definitely been a fun albeit it expensive hobby.

Let’s get on to business of what will be the final Quick Hits blog of the year.

Had a chance to stop by the Kansas Star Casino for a few hours this week. The current casino is inside what will be the equestrian center, so don’t let the size fool you. The actual casino is scheduled for completion I believe late 2012, possibly sometime into 2013. The current setting is nice but has been extremely busy from the people I’ve spoken with. When I stopped by late in the evening, it was very busy. Nearly all the tables were full. Table mins ran from $10-25. Not a single $10 seat was open so if you wanted to gamble it would be a $15 or $25 table. They have craps, roulette, pai gow, baccarat, let it ride but no poker room right now. Plenty of slot machines. The drinks there are not cheap and the last thing I noticed, it’s VERY smoky. Ever since the smoking ban, I’m so used to going out and not having to deal with all the smoke. It’s not like that here. One funny sight: a person using an oxygen machine while smoking a cigarette. Classy folks. Classy. 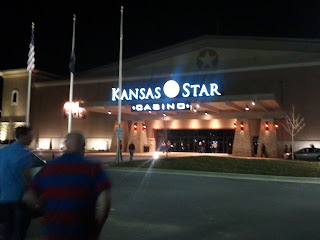 At Central and Rock Road, a Chick-Fil-A sign is finally up. The building is officially under construction. I’m surprised none of you Chick-Filnatics are camping out there right now.

Project Minimum Salary starts in a couple days. I’ll have the daily blog up on here once that begins. Am I looking forward to it? Kind of…… Not eating out all the time is going to be missed!

Never been to d’Sozo before but I read that as of January, it’ll now be called Miguel Larcher which just happens to be the name of the owner and head chef.

What am I most excited about tomorrow (not including the company)? Not the New Year’s Eve celebrations, not dinner, not having the day off, but it’s the Wichita State/Creighton game. Saturday late afternoon quite possibly might be the loudest Koch Arena has been for a while. The UNLV game was big but this one is much bigger. You have the top two preseason favorites going at it. Our biggest rivals coming to our home. We win and we have a two game conference lead on Creighton. I dislike mice, I dislike cats but I dislike blue jays even more. For those going to the game tomorrow, remember it’s a “Black Out”. Wear black.

A group of friends and I made it out to Wichita Brewing Co and Pizzeria. We stopped by midweek and the inside of the place is bigger than I thought it’d be. They were able to seat 12 of us rather easily except we had to wait for the tables to clear. (Side note: Don’t you hate it when you’re with a party and they have 3 of the 4 tables open and you’re just waiting on this one table to clear. The couple sitting has already tabbed out but they just sit there and talk?) Nearly everybody at the table tried different beers they brewed there along with an array of pizzas. I had the 5:02 Amber and it was pretty delicious. Others around tried the Half-Wit Wheat which they said was the closest thing to a light beer they had on hand. I didn’t hear a single complaint on the beers. For a pizza, I tried the “Mother McCLuck’R” (citrus blaze base topped with chicken, Andouille sausage, red pepper, fresh sliced jalapenos, red pepper flakes, fresh cilantro and honey drizzle). Pretty sure there was sriracha on top of it. It was very good if you like spicy food. After three slices, I needed water. Tried a bite of the Buffalo Perfection and it was ok. What were really good were the stuffed mushrooms that a person at our table ordered. A buddy of mine ordered one of their subs and wasn’t a fan of it. He ate half and gave the rest away. The general consensus I heard around the table was that the pizzas were good but not great. Some people said that Il Vicino was much better but I’m not sure the pizzas are comparable. Would people go there again? People said yes even though it’s quite the drive for an east sider. I took some pictures of the food but didn’t get the names of the pizza so use your imagination! 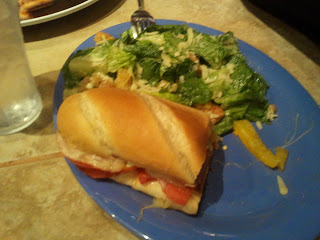 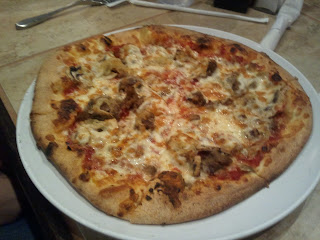 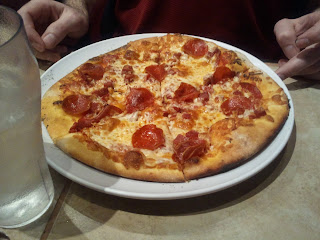 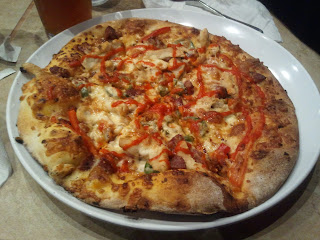 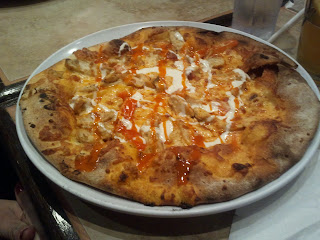 Letter T is hopefully on the block before the New Year begins.

Until then, happy dining!