We’re back with the 20th letter of the alphabet: Letter T. It’s been roughly 20 days since we last stopped by a restaurant for a Letter.

For Letter T, I wanted to try something a little different: a fresh little spin as I like to call it. The reason for this was because when I asked for suggestions for Letter T, there were two recommendations that came up quite often: Ty’s Diner and TJ’s Burger House. I couldn’t choose between the two so I asked myself, why don’t I just go to both? So that’s what I did. For Dining By The Alphabet Letter T, we’ll be reviewing not just one T but two T’s! Exciting, I know!

I recruited the help of four guest diners to join me in reviewing the Ty’s and TJ’s. Two of them are first time guest diners in Dave and Eric. Another is Ricky who has joined me before but never as an official guest diner and then Tiffany who makes her return after letter’s A through I. All four of them will assist me in reviewing each place and giving their score. We won’t necessarily be deciding who’s better but scoring each restaurant separately and giving them each their own review. There will still be comparisons made just because we’re going to two similar places.

In a Wichita By E.B. first, the Super Scientific Scale will consist of not just one, not two, not three, not even four but five reviews! Take into account two T restaurants, my fingers will be quite exhausted by the end of all this.

Let’s get to business. 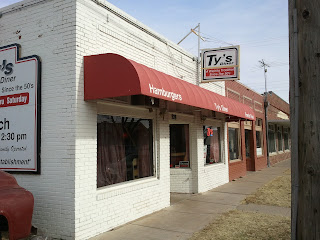 Ty’s is located on 2nd street just east of the corner of Seneca and 2nd. They do not have a webpage. Something about a place not having a webpage that puts them behind the times irks me. Their hours are a little odd with only being open from 11-3 pm which makes it hard at times to make it out there.

It didn’t take long for our burgers to come out. Right when they arrived, our server gave us extra plates at no charge to split our burgers and fries up. We all liked that as well since some restaurants charge an extra plate charge. One of the first comments that came up was how the burger looked like Freddy’s. It’s a hamburger patty that is flattened and barely had any grease that we could recall. Everybody for the most part liked what they had but I wouldn’t say LOVED it. Ricky was a fan but preferred a thicker burger and he didn’t find it as filling for a whole burger. Probably the only person who loved it was Tiffany. As for the fries, they were your standard fries that were a bit greasy and needed a little more salt to it. Nobody thought it was a big draw but nobody thought they were horrible either. I was actually going to say, “They are nothing to write home about” but was told I’m using that line too much so if I used it in the context I just did, it doesn’t count! 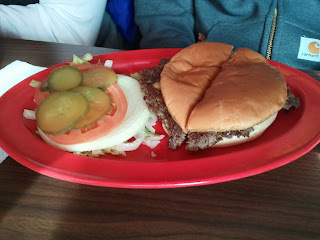 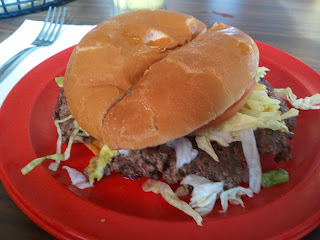 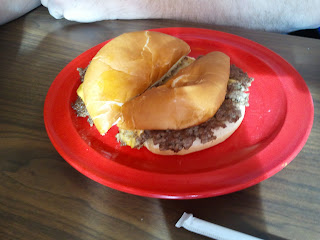 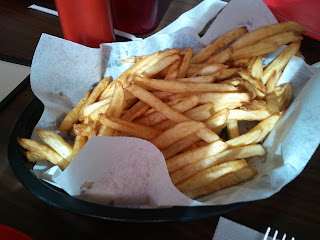 One quality about Ty’s that Eric and Dave commented on was the ambience. It was a really good atmosphere inside. The building is a little smaller but still can seat a good number of people. Plus you can see the cooks make your food as the grill is open for all to see. Our food order came out quick. The service was also nice and friendly. Our server ribbed Ricky a little at the start of the lunch, all friendly……. or was it flirty?!?! Who knows!

My personal thoughts on the place? Service was excellent and friendly. Seriously folks, a smile and speedy refills can go A LONG ways! The burger was really good. It’s not the thick and juicy type of burger you may be accustomed to at a hole in the wall but it’s still delicious. I do agree with Ricky though, it wasn’t quite as filling. The fries were your regular run of the mill type fries. The atmosphere as mentioned earlier was excellent. Seemed like a place where everybody knew your name. Would I go there again though? Definitely. It’s just that the hours are not too convenient for me.

A whole basket of fries split three ways along with a whole cheeseburger ran everybody around $6-8 not including tip.

We all tabbed out, chatted for a minute and headed over to our next destination. Before that though let me mention if you park behind the Ty’s building, there are a lot of trees and birds will poop on your car. Just like Chris Farley said in Billy Madison: “I know from experience…..dude!”

T J’s Burger House (make sure you put the space between the T and J when googling) is located on west Douglas in the Delano district, just east of Seneca as well. The building is much larger and can accommodate quite a few people inside. T J’s is open for lunch and dinner. If I can find their hours, I’ll modify this portion of the blog. They too don’t have a webpage…….ugh!

We arrived and took the back entrance. You can find the entrance off of Douglas but there is also parking in the back. One thing we noticed as T J’s had more of a diner type look inside. Not sure why they didn’t just call themselves T J’s Diner because that would have made sense. We were seated pretty quickly even though they were pretty busy at the time. Our server came up and took our drink orders; she seemed nice but you could tell she had that “I’m busy look” (not in a mean and smug way though).

Everybody ordered something similar. Erica and Dave went with the cheeseburger and a 1/2 order of onion rings. Ricky went with the cheeseburger plain with ketchup and a 1/2 order of fries and then Tiffany and I went with the cheeseburger with a 1/2 order of fries. It took a little longer for our order to come out but that could be attributed to how busy the place was. Drink refills were a little slower too. Once the food did arrive, first comment was on the size of the burger. It was definitely a thicker and juicier burger. Tiffany pointed out the grease on the burger while Ricky tried to play it off. I would later state, “If it can kill you, it’s probably good food.” Dave liked the size of the burger and his first comment was, “I like it to fit in my mouth.” The table went quiet……….

Time to eat. Erica along with others thought the burger packed a lot of flavor. Everybody was given their own basket to eat out of, once again, at no additional charge. Ricky kept going on and on about the burger and how much he liked it. Tiffany wasn’t quite a big fan, noting that she liked burgers with less grease and patties that were packed down. Her comparison for T J’s was that it was an “upgraded Sonic burger”. Dave….well he just kept eating away. The fries, once again, were nothing special. They lacked flavor and needed a little extra seasoning. Dave and Erica really liked their onion rings though. 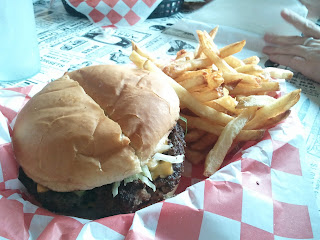 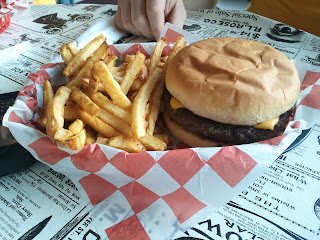 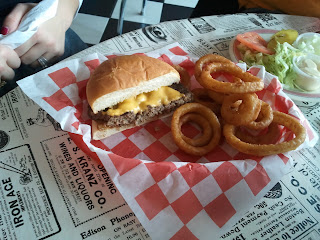 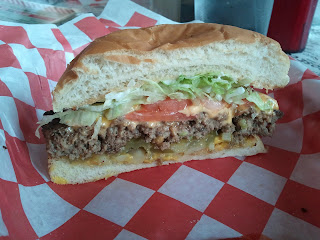 For the service, as mentioned earlier was a bit slower. We didn’t look at what the staffing looked like, just the number of customers that were coming in. Items like refills and the time it took to get our burgers took some time so I wonder what the service is like during lunch time during the weekdays. The atmosphere had a diner/restaurant feel. Erica was the first person to say that Ty’s was more to her liking. I would add that Ty’s is a bit more “cozy” for a restaurant and you felt more at “home” I suppose. T J’s is more open and there’s a lot more space. So it’s a total matter of opinion.

The prices at TJ’s are comparable to what you’d spend on anywhere for a burger or “should spend”, I should say. Everybody’s ticket for a burger and a 1/2 order of fries or onion rings rang up to between $6-8 not including tip.

My personal opinion, if you value that at all, was I really liked the burger. It should be said though that I like the juicy and large size burgers that really fill you up. I wasn’t sold on the fries and the service was forgivable. We waited but it wasn’t at time lengths where we would be looking at our watches or cell phones counting the minutes.

Before tabbing out, I should mention that Erica and Tiffany were looking at the malts and shakes being served. They both looked like they would give their left arm for one.

That puts TJ’s Burger House with a final Super Scientific Scale score of 3.8.
So if you’re comparing TJ’s or Ty’s, TJ’s Burger House just edged Ty’s Diner by 2/10’s of a point.
I don’t think you can go wrong with either place. I loved both burgers; T J’s a bit more but liked the ambience and service of Ty’s more. Both places have qualities that anybody would love. It’s all a matter of preference on the style of burger you’d prefer.

I would like to thank Erica, Tiffany, Dave and Ricky for joining me on Letter T. Only six letters away from completing the first entire installment of Dining by the Alphabet.