If you hadn’t heard, Taco Bell has a new creation out. It’s called the Doritos Locos Tacos. The simplest and only way to describe it is it’s a taco with a hard taco shell that’s really just a big Doritos chip. You read right: a Doritos taco shell. 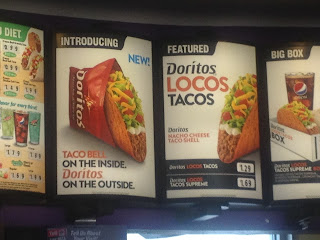 If you think about it, it’s really a novel idea. Kudos to the man or woman who came up with the creation. What’s next a Doritos Cooler Ranch taco? Taco Bell could really earn my business if they came out with an Art and Mary’s Jalapenos Taco.
The latest creation spawned by the R&D department of Taco Bell was intriguing enough to get me to go inside and purchase two of them. I went for lunch the other day to give it a try. I’m not the biggest fan of Taco Bell so for something to get me to go in there is quite the feat in itself.
Place was busy when I walked inside, at least 10-12 customers already eating. And I am not lying when I say; every single table with a customer had at least one Doritos Locos Tacos on it. Everybody was just as intrigued as I was. The specialty taco runs $1.29 so I went ahead and purchased two. I grabbed some hot sauce and sat down and waited.
….and waited…..
….and waited. 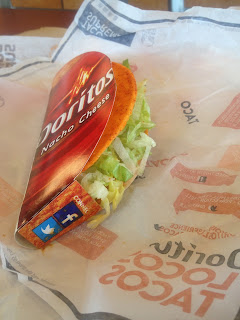 Some dude yells #226!!!!! That’s me!
Opened my first one up, poured some hot sauce into it, and took a bite………taste like a taco. Shocking, I know. I broke off part of the taco shell and it was definitely a Dorito, complete with the feeling of it with the dusty cheese seasoning feel all Doritos have. As I took another bite, you could somewhat tell the taco shell had a different taste to it. The shell for sure tasted better and didn’t have the cheap stale quality of a hard taco shell you find at some outlets. On the second taco, I poured less sauce on it to see if I could really tell the difference. Minor change. Overall, I didn’t get the “wow” factor I originally had when I heard about the taco.
The taco didn’t taste any better than what one could get at a Taco Pronto or Taco Shop, two of the better fast food taco establishments in Wichita in my opinion.
Is it worth a try? Sure. Go buy one and see for yourself. I wasn’t blown away but the intrigue was enough to get me to go in. I don’t think I’ll be going anytime soon to get another one. I think one time was enough for me. And lastly the nutritional information for the taco for you health nuts. 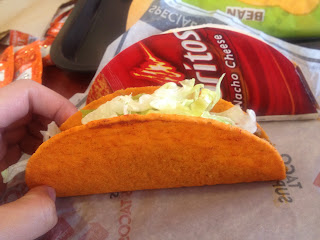 0 thoughts on “The Doritos Locos Tacos – Is It Worth the Adventure?”