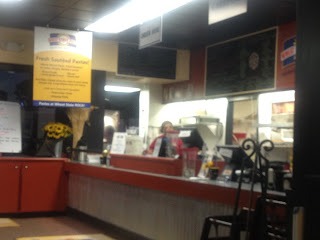 Who doesn’t love March Madness? I know I do and one of the biggest things I’m looking forward to, outside of the Shockers going to the dance, is filling out my brackets. But did you know, there’s more going on for March Madness than just basketball?
Yessirreebob! I found out on Monday night’s from 5-8 pm, there is a pizza buffet at Wheat State Pizza. Not only that, but Wheat State Pizza is helping out the Leukemia and Lymphoma Society at the same time. Not only that but there is live entertainment! How much fun can one ask for?
I’ve never been to Wheat State Pizza before so this was a great way to try out many of their delicious offerings, help out a great cause, see a ventriloquist in person, and listen to live music. They were also giving away a Blu-ray player, toys and other items. Unfortunately I did not win a single thing but I’m not complaining.
When Tiffany and I arrived, the employees there were all very friendly and helpful. They were quick to ask if there were any particular pizzas we wanted. I looked at the menu and was overwhelmed at the number of specialty pizzas they had. We eventually just told them, we’ll be glad to try whatever they had out and would like whatever they suggested. 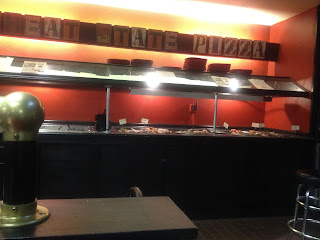 Throughout the night, they probably had an assortment of 8-10 pizzas out. Seriously if you haven’t been to Wheat State Pizza, the buffet is the best way to try it out. They also have “Family Buffet” on Wednesday nights according to their Facebook page.
The pizzas we tried were:
The Farmer (Pepperoni, Pork Sausage, Ham, Beef, Red Onions, Green Bell Peppers, Black Olives, Mushrooms, and Mozzarella)
Pad Thai (Peanut Sauce, Sesame Oil, Cilantro, Siracha, Onions, Chicken, Mozzarella and Crushed Peanuts)
Mediterranean (Pesto Sauce, Spinach, Green Olives, Sun Dried Tomatoes, Feta, and Mozzarella)
Luau (Ham, Pineapple, Spinach, and Mozzarella)
The Hawk N’ Cheese (Cream Cheese, Chicken, Red Onions, Green Bell Peppers, Mushrooms, Provolone, and Mozzarella)
Jalapeno Popper (Cream Cheese, Jalapenos, Bacon, Garlic, and the 3 Cheese Blend)
There was another one I tried but it was unlabeled so I am not sure what it was. Of all the ones I tried, the Farmer and Luau were my two favorites. Tiffany really liked the Hawk N’ Cheese, she’s really starting to like cream cheese on her pizzas. Of all the pizzas, the Pad Thai was the most interesting. To this day, I’m still not sure what to make of it and if I liked it. Tiffany didn’t but I’m still intrigued by it all.
What stuck out most for Tiffany was something that didn’t even dawn on me when she brought it up. The pizzas are hand tossed with wheat dough. It definitely had a different taste to it but I don’t think I could have been able to guess that.
If you live on that side of town, Wheat State Pizza is worth the try. Many people I’ve spoken to have said good things about it. It’s not in the area of town I live at so I won’t make it out there much but would if I just happened to be driving on the way back from the casino or something! Plus if you go on Monday nights in March, you can help out a great cause.
And finally on my calendar for this week is Letter U. Guest Diner has been lined up, the place has been chose and the date has been set. Stay tuned folks!

What to expect at Boba Zone