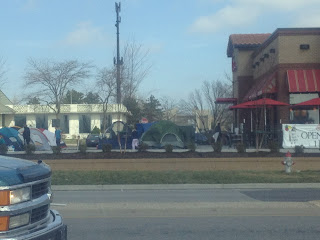 STOP! Let’s end the hype right there. Probably the biggest restaurant news to hit Wichita since White Castle briefly came to Wichita (oddly enough in the same area of town too), Chick-fil-A has finally opened its doors to the public. Since I’m in the area, I was able to drive by Wednesday before the opening, the day of the opening and the day after. Let’s just describe the scene with one word: ridiculous. On Wednesday when I drove by, there were tents in the parking lot, people just playing catch, a live flash mob of people doing choreographed dance. I felt like I was watching a live cult in action. All this for just a chicken sandwich? I had to find out for myself what the hype was all about. 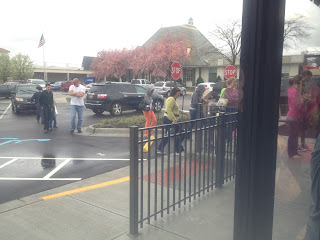 The guy in the white shirt is probably saying”Screw this line, let’s go to Popeyes!”

For those that already don’t know, there’s a Chick-fil-A on the Wichita State campus, I’ve been to it just once in my life and never to a free standing Chick-fil-A location. It’s all new to me. Everybody tells me that the regular locations are better than what you can get on campus. Being the adventurous type I was willing to brave the lines and see for myself.

After a few days and letting the popularity subside, I gave it a go. Drove by Tuesday for lunch and saw a line of probably 30-40 cars and decided to get my chicken at Popeye’s. Gave it another go on Wednesday and saw another line of the same amount of cars. I figured I could always blow some time and go inside. Found a great parking spot; avoided being hit by cars and hopped in line. The line ran outside of the building and it was starting to sprinkle…..just my luck. All this for just a chicken sandwich. As it started to rain, many employees brought out a little tent for people to stand under. It was very nice of them to do so.

Once I was inside, I glanced over the menu trying to decide what to get. I grabbed some suggestions off of Facebook and Twitter since I’m a man and inherently cannot make decisions for myself. I would go with the spicy chicken sandwich, fries and 12 pc nuggets. Yes I was ready to gorge myself with food. The line of people probably ran about thirty plus people but with 5-6 cashiers going at the same time, the line moved rather quickly. Much better decision than the drive-thru even though there are two lanes.

The prices are comparable to what you would see at any fast food restaurant for a meal. I broke mine all out since I am not drinking pop. Sandwich was about $3, large size fries were a little under $2 and the 12 pc nuggets were $4. A regular meal of a sandwich, fries and a drink will run $5-6. I wanted to try the popular items everybody was telling me to just in case I never went again. From the moment of ordering to receiving food, it was about 5-7 minutes. Not too bad for how busy the place is. There were probably just as many employees working as there were customers. (Highly exaggerated but there were a lot of employees working when I stopped by). 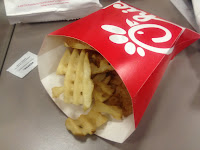 Moment of truth. I started off with their waffle fries. First thought was I should have ordered a medium size; the large was well……large. The waffle fries were good; they weren’t overcooked or smothered in grease. I liked how there wasn’t a crunchy feel to them which many waffle fries tend to have especially in bars. They were good fries but I’d still rank Arby’s curly fries, McDonald’s fries, Spangles fries, Barn’rds fries, Freddy’s Frozen Custard skinny fries and even Wendy’s new sea salt fries over Chick-fil-A’s waffle fries. So there are definitely better options out there for fries. 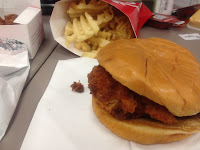 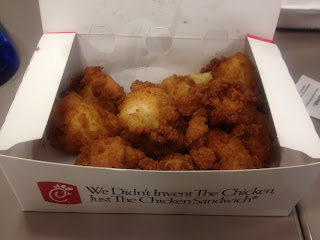 By this time I was starting to get full but had to move on to the 12 pc nuggets…..well 11 since I gave one away. Generous, I know. The look of the nuggets through me off. I was expecting it to look like the Tyson brand you buy at the grocery stores or something like McDonald’s, Wendy’s or Burger King. Nope. They looked a little smaller than usual. I had two dipping sauces, bbq and Chick-fil-A sauce. They offered other types but I was in a rush when my cashier rattled off all the sauces she had. So I opened up the two sauces and went to work. Don’t be fooled by the size of the nugget. It packs more punch and can fill you up. There’s a lot of meat inside each nugget. Lots of flavor and it was to the point I didn’t want the sauce. I think more so because I just didn’t like their bbq or Chick-fil-A sauce. Next time, I’ll try different sauces.

Did I like Chick-fil-A? Yes. It was very good and decently valued. Is it worth waiting in line for? Probably not. I’ll say that going inside may be less of a wait then the drive-thru method. If you’re in a rush for lunch, don’t go to Chick-fil-A. Getting in and out of the parking lot may take more time than actually waiting in line, ordering and receiving your food. By no means is Chick-fil-A the greatest thing in the world and worth all the hype. I would say that there is no better fast food chicken sandwich currently in Wichita but let’s not get ahead of ourselves here. I’d compare Chick-fil-A to LeBron James. Both very very good but not the greatest ever. Too much hype with zero championships to back it up with.

Once you go, I bet you’ll be happy with Chick-fil-A. Just don’t waste a lot of time and go through a big hassle just to get it. Definitely try the nuggets. When you go, make sure you order, not one, not two, not three, not four……….