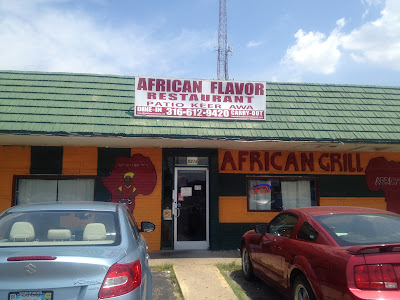 They are located on 5218. E 21st N just east of the Taco Tico building in a small three store strip. It’s in a former Hookah bar.http://africanflavorrestaurant.com/
African Flavor Restaurant also has a Facebook page with more pictures and a menu, more on that later. 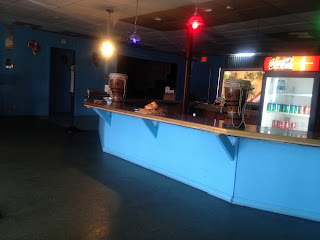 They have been open for a little over three months and serve primarily Western African food as we were told. A couple friends and I decided to go there for lunch to get a glimpse of the goodness African Flavor Restaurant served.
Walking inside you could tell it was a former bar. There is what appears to be a bar in the middle of the restaurant that has been stripped down: a room in the corner of the building that’s still painted all black with graffiti on the wall and a disco ball in the ceiling. Aside from that, the rest of the inside if painted blue with a strong smell of incense that is constantly burning. The walls are filled with African décor adding some culture to the place. 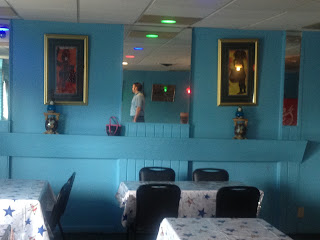 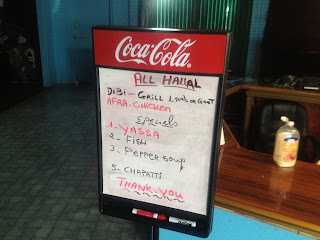 Stepping up to the counter, you see a little board that displays their small menu. One of my friends noted that the menu choices weren’t very clearly presented. A nice description next to the menu would have been helpful for someone who hasn’t had Western African food before.  When we arrived, the lady taking our order informed us that they were out of the fish (which is a full sized fried fish) and Yassa (your guess is as good as mine on what that is). So we decided to order everything else on the menu including a peanut butter soup we were told about.
Our order consisted of the following:
Dibi – grilled lamb with rice and vegetables
Pepper Soup – grilled goat in a spicy soup broth
Peanut Butter Soup – grilled lamb in a soup broth with peanut butter
Chapatti – an “African taco” as we were told. Tortillas with noodles and grilled lamb
All the items sounded interesting and all of us were very adventurous eaters ready to try anything. We figured we might as well try everything else they have left and split it to see if this is a place we’d consider adding to our lunch rotation.
There were only two workers at African Flavor, a husband and wife combo so if you go at a really busy time it could take a while. We just missed the rush of people when we arrived so we were fortunate in that regard.
When the food arrived, it all looked very tempting; that or the fact that I missed breakfast made me ready to eat anything.
The first item we tried was the Peanut Butter Soup. Totally did not taste like peanut butter, not even a hint of it in the flavor. One friend said it was more of a creamy lightly savory flavor. The lamb pieces were tender but were a hit or miss on whether it was a big chunk of fat or a tender lamb morsel. Plus there’s a big bone in most pieces you it’s not the type of soup you can just spoon in your mouth and swallow immediately.
Next up was the Dibi. It was by far the best of the group. One friend said it was tasty – thin grilled lamb steaks that had the right level of crispiness and fattiness. I too enjoyed it; the lamb was cooked just right. Having the bed of rice next to it was just the cherry on top.
The Chapatti came in a bowl of grilled lamb and noodles in a meat sauce. Two tortilla rolls were served with it. We were told to rip the tortilla in small pieces and spoon it into the bowl of lamb and noodles. The lady who served it to us told us it was a Kenyan dish. This was probably the least eaten of the four meals. The lamb and noodle combination just reminded me of a Hamburger Helper meal but with better meat and a little more flavor.
To end it all was the Pepper Soup which was grilled goat in a broth filled with spices. It wasn’t too spicy as the lady suggested; though it had a little greasy taste to it. The goat was very good and tender; quite possibly my favorite meat of the bunch.
When we paid for our food, we received quite a shock from the cost of our meal. Our ticket total was $54. From doing the math with the prices listed on their Facebook menu, it didn’t add up. We didn’t say a word though to the guy tabbing us out. It was a little costly for a lunch. If you go there, you can expect to pay around $10 for it.
Overall the place was pretty good and very unique. One friend said he’d go try it again in a couple weeks, maybe for dinner; now that he’s better prepared on what to expect for the prices. I couldn’t agree more.
Many of you have east siders may have driven by this place on the way to school or to see a Shocker game. The looks of the exterior may look sketchy but it’s worth a try. I look forward to trying it again in the future. I think the next time I do go though, I’m going to grow my hair out so I can go visit the establishment next door and support another locally owned Wichita business……… 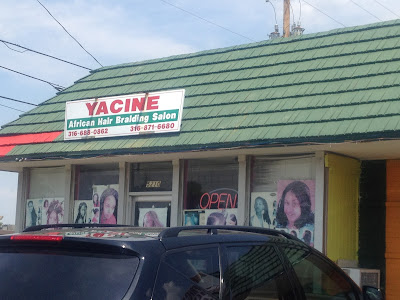 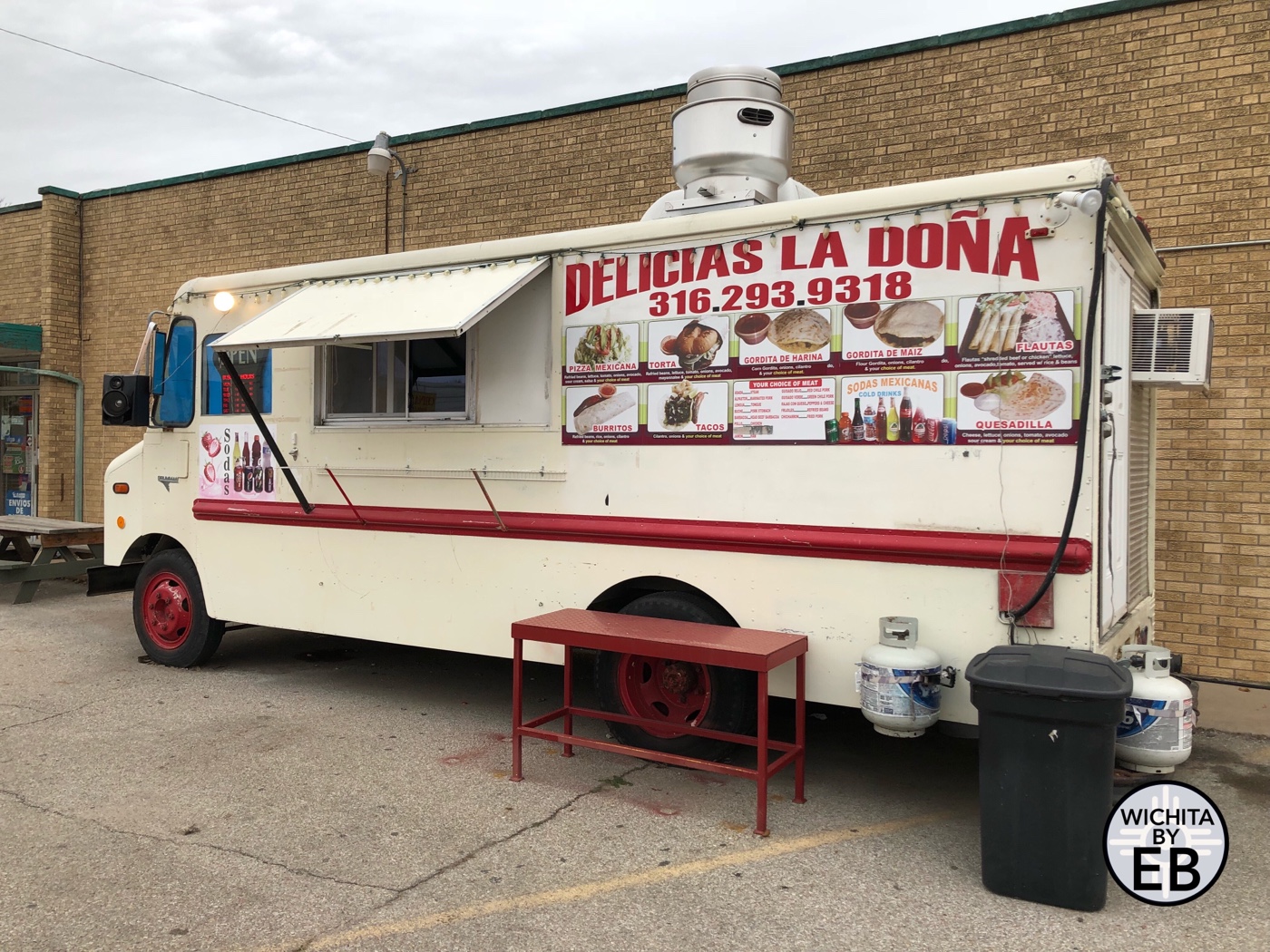 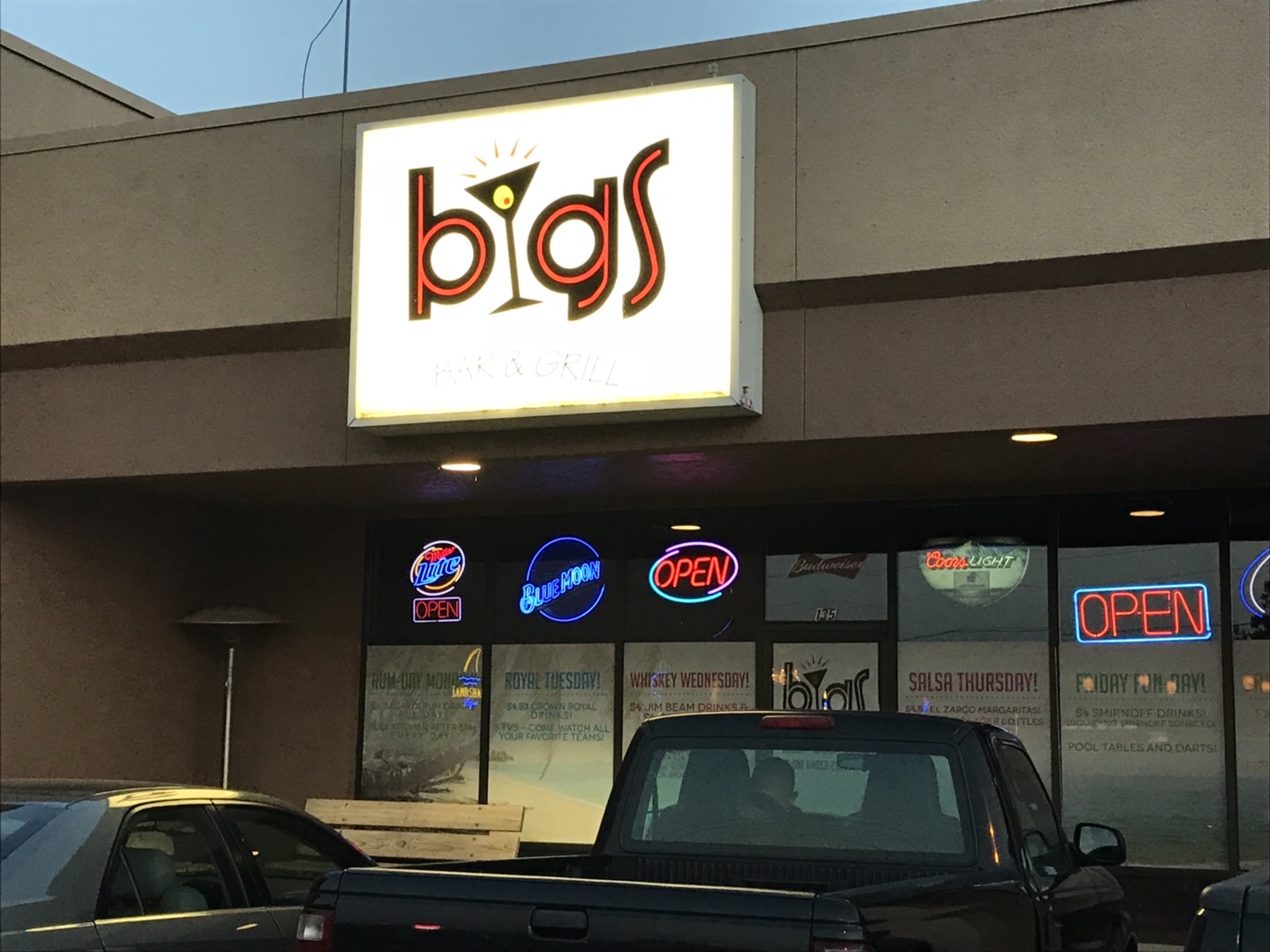 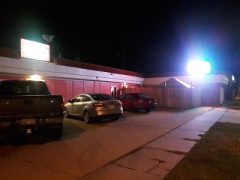 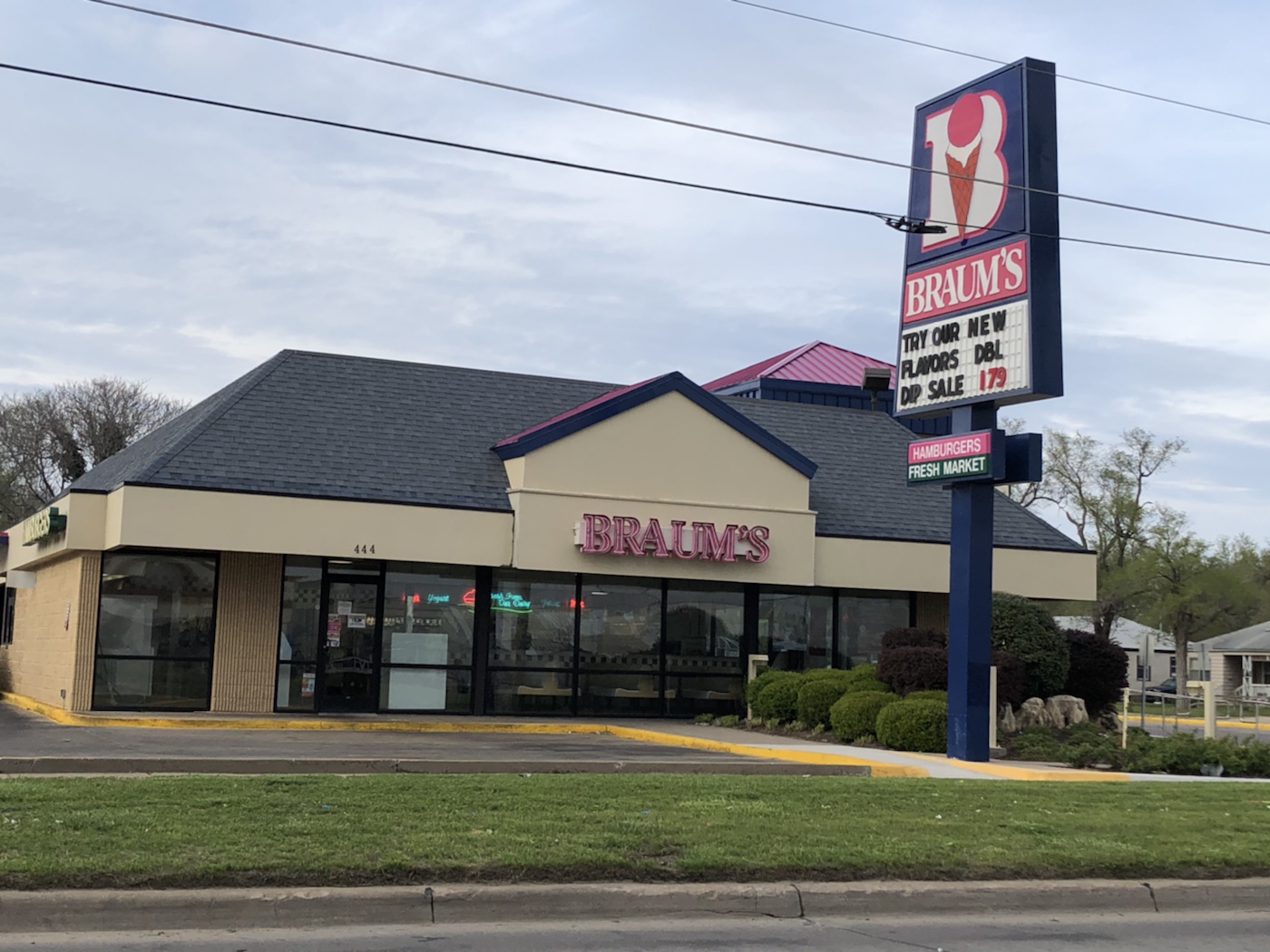