Search
Donate
Search
Donate
Home Experiences Prairie Fire Half Marathon: I Hate Stairs
It all started with a bet. It always does. A friend and I were just talking back and forth about I forget what. We kind of knew that running a half marathon was on each other’s bucket list. So why not get it over with sooner rather than later? We found out that there were two half marathons on back to back days. He lived in Florida and there was one in October 13th. I was in Wichita and there was one scheduled on October 14th. We decided, “What the hell, let’s just do it.” The bet was then formalized to keep each other accountable. Person who does not finish the half marathon has to shave their head. That is ultimately what got me to this morning, October 15th feeling like crap but with a whole head of hair.
I’m not big on practicing and training. According to my iPhone app, between the day the bet was made and the day before the Prairie Fire Half Marathon, I ran seven times, never more than 4.47 miles and less than 2.53 miles. I ran one time in the month of October and one time in the month of September and that was the Susan B Komen race. Needless to say, I was really worried about the Half Marathon. I looked at the map of the race and my jaw hit the floor. You really don’t know how far 13.1 miles is until you draw it out on a map. The night before, I was up until 1 am. I couldn’t sleep!!!
Morning hits. I am extremely groggy and on five and a half hours sleep. Shower, put Band-Aids on my nipples, get dressed, eat a peanut butter protein bar and make it out the door and towards downtown. I step out of my car and it was FREEZING. I only had a short sleeve Dri-Fit shirt on and shorts. It was so cold; I almost popped my Band-Aids off without using my fingers!!! 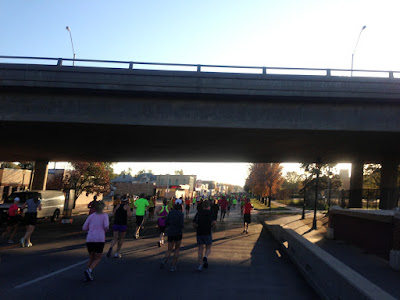 7:55 am, they sing the National Anthem and then it’s game time; people are off running. Another lesson I learned from the River Run was “pace yourself”. Having only ran once this month, I wanted to gradually start slow and just run at that pace. A mile in I was so cold and my fingers were shivering. A guy in front of me ran in only the shortest shorts known to man. I could not have done that.
My first mile clocked in at 10:43. I was thinking to myself “OK Eddy, you are feeling good. Only 12 more to go. You’re not tired whatsoever. Just stay positive, wait…..did I set my fantasy football lineups?” Panic mode set in and I had to text a friend to make sure they were set and then I see the Mile 2 marker ahead of me.
10:43. OK, I was ten seconds slower than the previous mile. I’m so cool with that. Going into the race, I really thought I’d average 13-14 minute miles. I thought I’d run maybe five and walk a mile, run a mile, walk a mile, run a mile and finish just under three hours. Then it hit me, I had to pee. I saw some port-o-potties but the lines were ridiculous. I knew there was a Kwik Shop not too far up on Douglas. I ran right up to it and used the men’s bathroom. Of course with my luck, there’s a spider in the urinal. It occurred to me there are some species of spiders that came jump. So I stepped a couple feet back to pee and if the janitor of Kwik Shop is reading this, I apologize.
Three mile marker and that was at 12:23. That mile would end up being my slowest marker. The next 3-4 miles would take me through College Hill where I saw many friends just sitting in their driveway, cheering people on. It was a pleasant site to see. It gave me added energy to continue running and not stopping. Of course, I also did not want any pictures being taken of me walking or looking like I was about to puke.
After seven miles I was 1:16:59 in and my delirious math thought that 8 miles was the halfway point. 13 divided by 2 is not 8. But at that point, I was thinking 8 miles was the halfway point so I was pushing hard to get to that point. Soon enough, I reached it. My eighth mile was also my fastest mile at 10:31. Not fast by most runners but for me, that’s lightning quick!
Finally I was telling myself. “Eddy, you’re halfway there. You have 8 down and only 5 to go.” I know….the math doesn’t make sense. Just roll with it. On my way towards mile 9, I texted one of my friends who lived in a downtown apartment to come outside. Along the way near there were a fire truck at Douglas and Washington. People were giving away free bottled water. A few feet past them were people giving away “Gu”. What is GU? Gu is an energy gel that provides athletes with a dose of 100 calories to deliver high-quality, easily digested and long lasting energy for athletes in every sport and at all levels. That’s what their website says at least. I decided to grab a GU instead of the water. Worst decision of the race. I tried the GU and it had a very chalky taste in my mouth and made me feel very thirsty. I threw three quarters of it away; it was so nasty. Instead I reached into my pocket and grabbed these runners jellybeans I saw at Dicks Sporting Good. They were actually quite delicious and gave me some added hydration and energy unless it was just my mind playing tricks on me.
The funniest sign I saw that I forgot to take a picture of said “Sweat is Sexy”. I almost responded, “How about tears?” (I felt like crying). But the signholder was probably 9 years old.
Next thing I know, I’m at mile 10 in 1:50:02. At this point, I could feel my legs starting to get tired. I had been running this whole time without stopping. I amazed myself. I was telling myself to continue running until the Mile 11 marker. Then God sent me a sign.
This is when I thought to myself WWMRD, What Would Most Runners Do?
Every runner I saw ran right past it. I thought it was kind of rude and graciously took Not one but two to make up for the person ahead of me who passed. They stood out there all morning with beer to support the runners, who am I to say no? The best part? They didn’t even card me. I chugged both cups down. A hundred feet later, I started to regret it. I was getting thirsty and noticed that I wasn’t sweating through most of the race. Was I dehydrated?
Mile 11 was 12:17. I had to stop running not too long after drinking the beer. My legs were giving out on me. “Only 2.1 more miles” is what I kept telling myself. I walked a little more and then lightly jogged. It was around this time I saw a lady with a 02:30 sign. It took me a minute to figure out what that meant. Her “pacer” shirt gave it away. She was running at a pace to finish at 2:30…well ahead of the goal I set myself. At that point I thought to myself two things 1.) I HAVE to beat a 2:30 pace and 2.) Has she really been holding that sign the ENTIRE race? 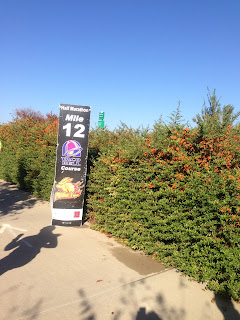 Mile 12 was completed in 12:12. I had only one mile left to go. The 2:30 pacer was about 10 yards in front of me. I then digged down deep and forced myself to “sprint” the rest of the mile. I say that loosely because my mind was saying “Sprint Eddy Sprint! But my body was saying “You can screw yourself Eddy!”. In reality, it was a quick jog. I pulled out my cell phone and looked at it as my mileage marker went from 12.20 miles to 12.30 miles to 12.41 miles to 12.5 miles. Then I tried my hardest to kick it to a higher gear for the final .6 miles. Having what looked like hundreds of people along the side taking pictures really helped. There weren’t really many people ahead of me or even behind me. I started to wonder if I was dreaming this whole thing but the constant pain in my quad nixed the whole dream situation.
Reaching the bridge on Waterman St was like seeing Heaven open up from the clouds except St. Peter wasn’t waiting for me…..Gatorade and Orange Slices were. I saw the clock ahead of me tick up and up. I ran as fast as I could………….AND FINISHED! My final time was 2:27 and lots of seconds.
Upon reaching my end goal, the first thing I looked for was my damn participation medal. That’s all I wanted until a friend I saw told me to get Gatorade so I grabbed that too along with a t-shirt. Took a couple pictures with people and walked to my car where I seriously sat for a couple minutes just letting it all soak in. It really felt great to finish the Half Marathon. The sense of accomplishment was up there. I would put it past Winning the Spelling Bee on my list of Top Life Competitive Accomplishments.
Today, I feel great but my legs feel miserable. Walking down the stairs is one of the hardest things to do. I hate stairs. Thank you to Henry Waterman, Elisha Otis, Werner von Siemens, J.W. Meaker, and Alexander Miles. Those were the people who are all credited with helping invent modern day elevators. I wonder how good people feel who actually trained for it. I bet they feel like a million bucks. Me? Well let’s quote one of my friends from yesterday, “You look like you’re walking with a stick up your ass.” Yeah, that’s what it looked like I’m sure.
So what’s next for me? A marathon? I don’t think so. 13.1 miles is a lot of running. I don’t envision myself running a full marathon unless I one night make a stupid bar bet with friends. Would I do a half marathon again? Probably. It’s two hours and 27 minutes of total suck but once it’s over with, you’re glad you did it. Kind of like how I felt every day I went to college classes. Two hours and 27 minutes of suck each day but once I finished it, I was glad I did it to graduate. Kind of like watching the first half of every Chiefs game. Two hours and 27 minutes of suck but once I finished, I’m glad I was entertained to see how bad an NFL team is.
In closing, I want to thank everybody who I saw on the sides cheering for people throughout the race. I saw college friends, high school friends, pickup basketball opponents, acquaintances, and even one of my old high school teachers. Well old as in that long ago from high school………… Hearing people cheer really does give you motivation and energy, something a GU Energy Gel can’t.
Now if you’ll excuse me, I need to go take these Band-Aids off.

What to expect at Illuminations at Botanica

What to expect at Apparition Yule Ball

What to expect at Snowbound: A Merry Ski Lodge at Chicken N Pickle 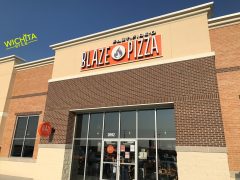 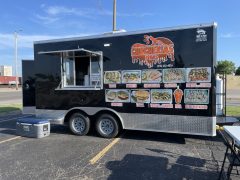 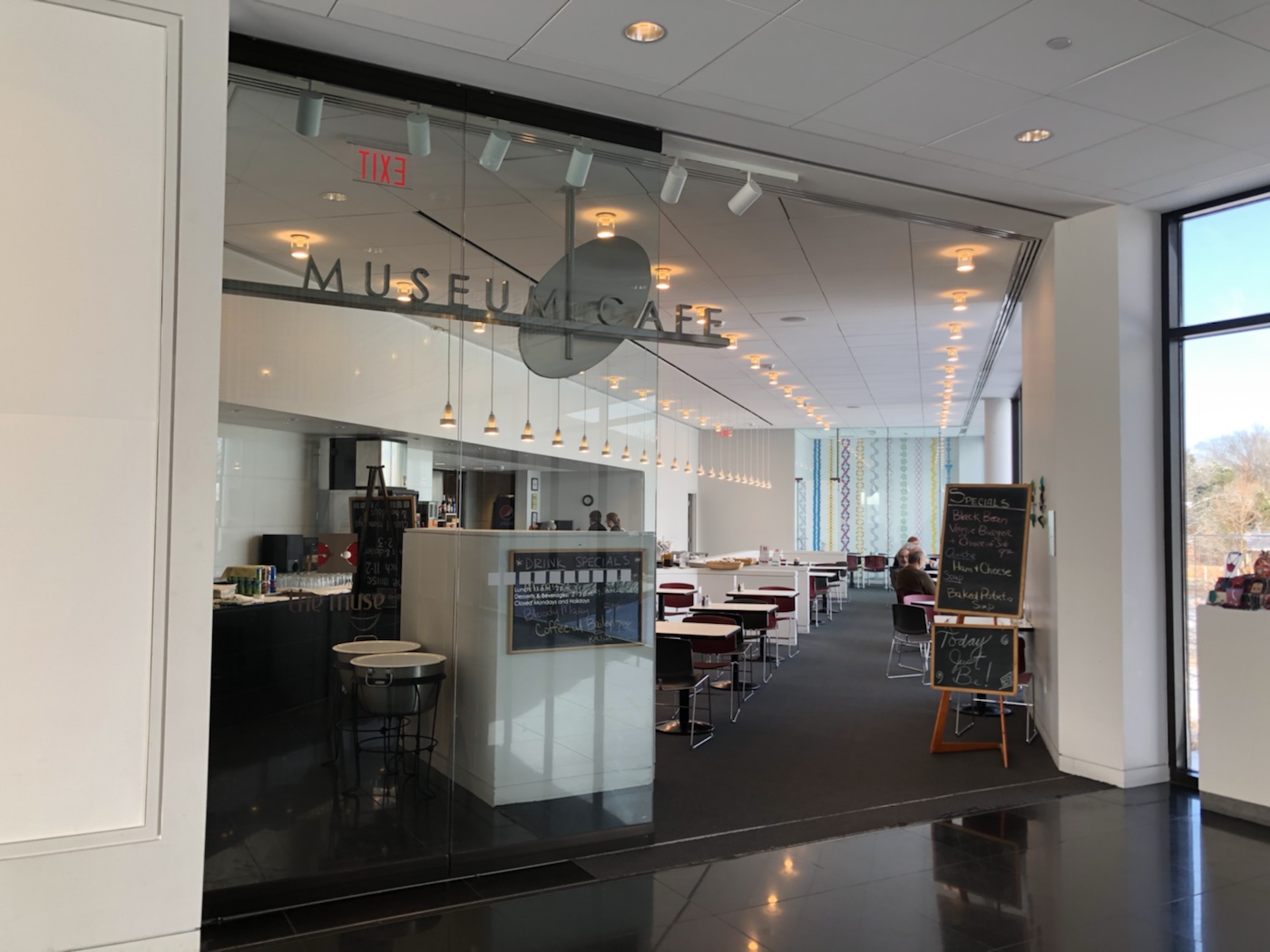 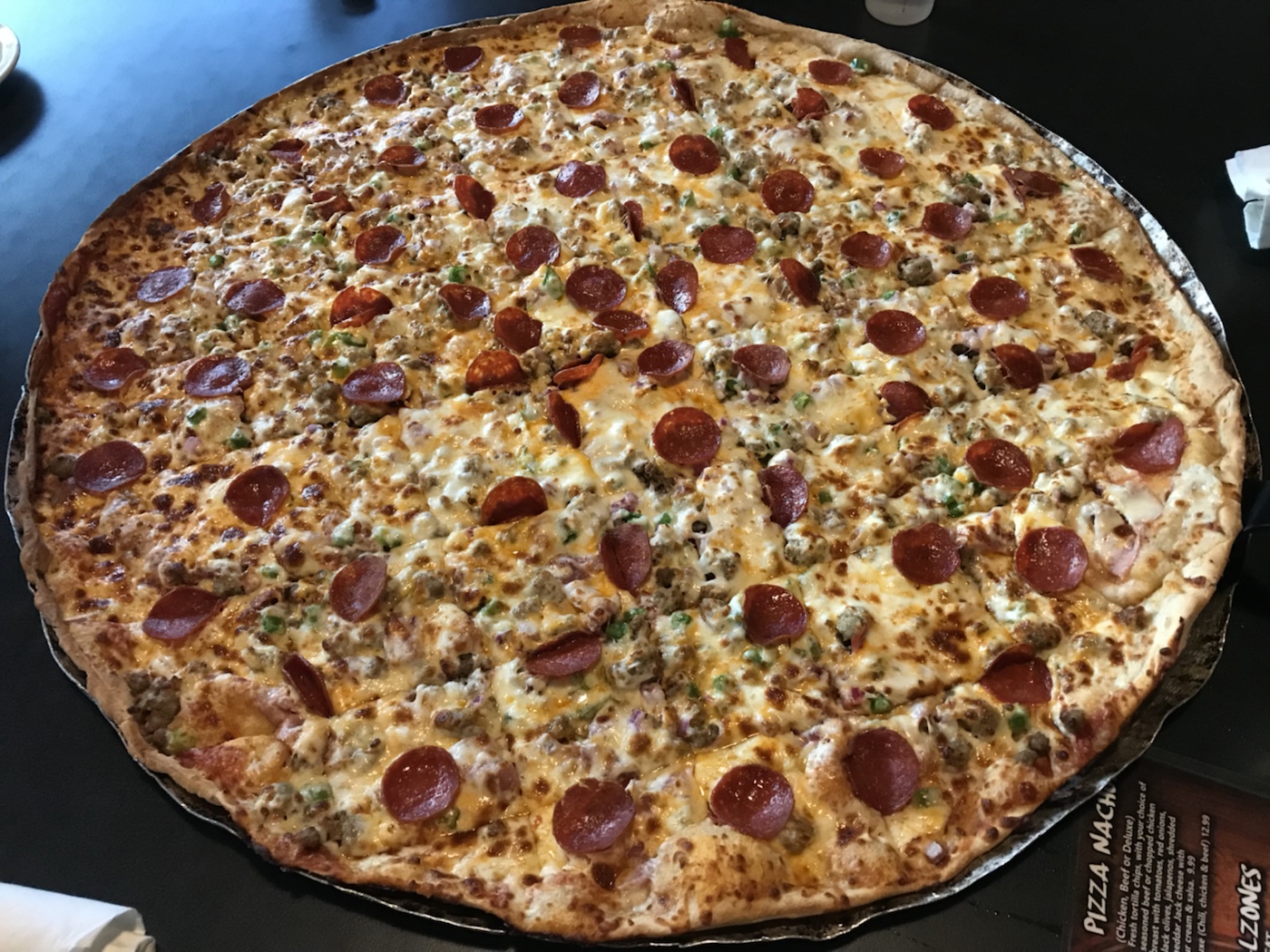 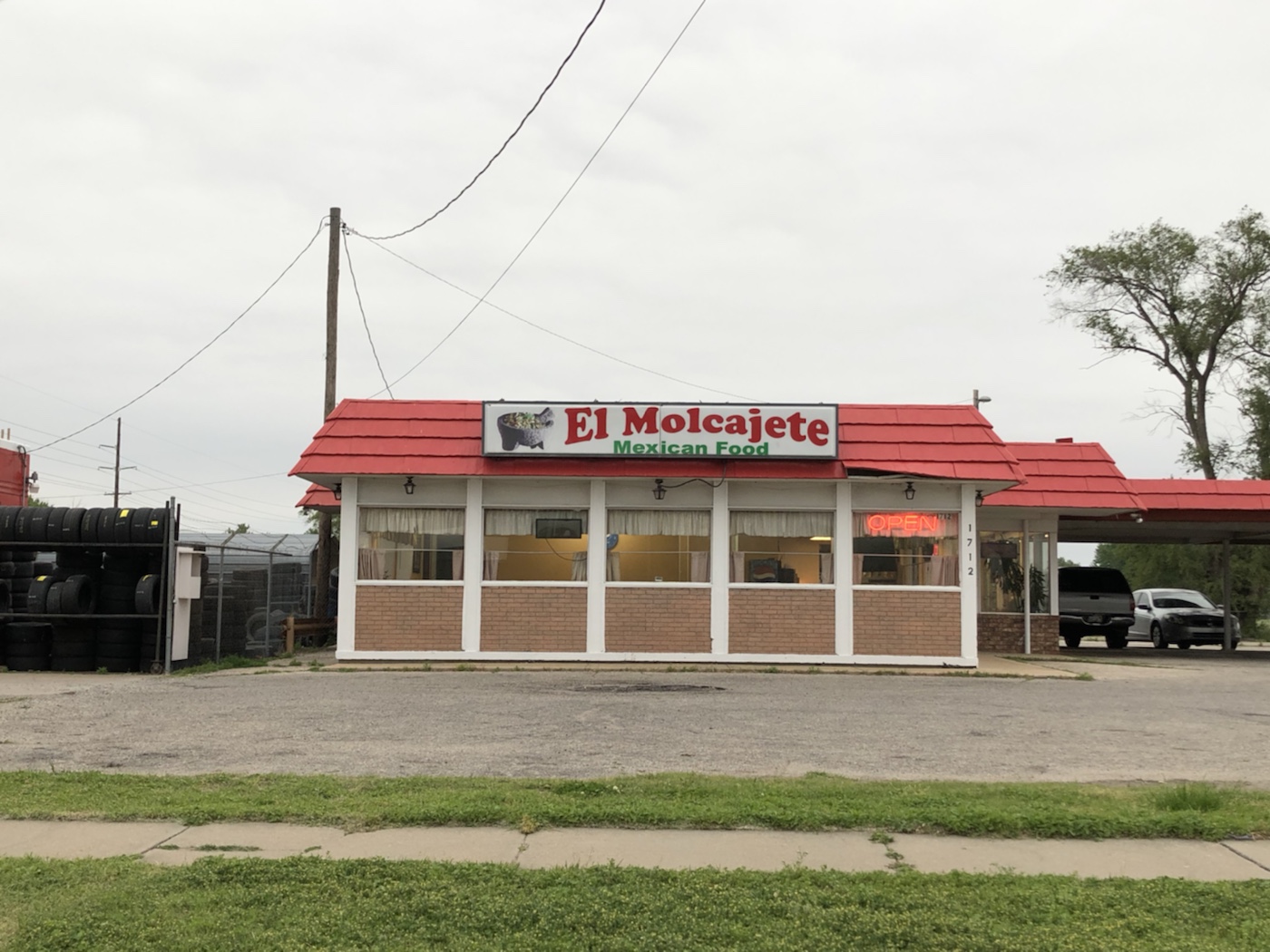