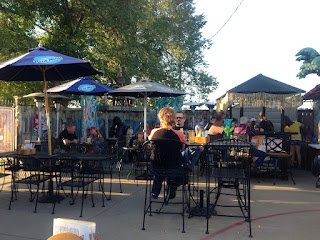 Way out yonder in a city called Andover just minutes outside of East Wichita sits a little bar and grilled called Timbuktu. Through all my time in college and post college, I’ve heard many good things about this place but could not just ever find the time to make the drive. It has a strong reputation for being one of the best burgers in town amongst many friends of mine along with food reviews I’ve read.
Well one Friday evening, I finally made it out there. I was accompanied by a handful of friends in celebration of our Aerosmith ticket purchase. There was one other person in our group that has never been to Timbuktu before so I wasn’t alone in this adventure. 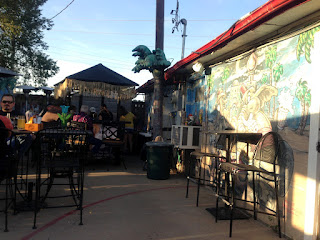 We arrived around dinner time and decided to sit on the outside patio. Due to the gorgeous weather, the patio was packed. Every single table was taken except for one which I was able to nab. Timbuktu has that hole in the wall bar feel to it that I really love; a place where the servers know all the regulars and vice versa. (Insert cliché’ Cheers comparisons). We even ran into some other friends who were there, and the servers immediately came up to them and made them feel extremely welcome.
Everybody immediately ordered a big beer…… well except for the two year old at our table. He didn’t have a fake I.D. For an appetizer, I started off with a side of corn fritters because I’ve never had them.  After a quick Wikipedia search, I was informed they are a mixture of corn kernels, egg, flour, milk and melted butter. They can be deep fried, shallow fried, or baked. The corn fritters at Timbuktu were served with ranch dressing. I’m not sure if it was because I was starving or they were just that good, but I found them to be delectably appetizing; others at the table agreed. 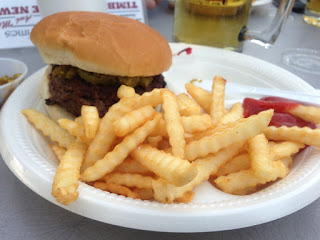 As for dinner, everybody ordered essentially the same thing: a Timbuktu Burger either with or without cheese. One of us even braved the Double, a one pound serving. Of course, I had to make sure everybody ordered the jalapeno relish as it was extremely popular according to other reviews I read. The burger is advertised as coming served on a fresh hamburger bun, served with potato chips and fresh dill pickle slices. Fresh onions and jalapeno relish are served on request. I believe nobody ordered chips, instead substituting with fries or onion rings.
For the amount of people there, the food surprisingly didn’t take that long. One of the guys at our table thought it felt like at least 25 minutes. So I could be wrong there; I just purchased the iPhone 5 that morning so I was still playing around with it.
First bite into the burger and I was pleased with it. That is probably the best way to put it. I am not sure I would call it the best burger in town unless I am referring to only Andover but it’s not a bad burger by any means. I’d still rank places like Oasis, TJ’s, and Ty’s above Timbuktu. What gave extra points to the taste was the jalapeno relish which I absolutely loved. It’s something everybody should definitely try if they ever go.
One person at our table actually puts the jalapeno relish into her beer. Kind of like a “red beer” but with jalapeno relish so I’m not sure what the technical name would be…… (At the time of me writing this I took ten minutes to come up with some really witty to call the beer but drew total blanks. So moving on…….)

The fries were ok, nothing memorable. I can’t even remember now what they tasted like. The bun? Not good at all. Here’s what one of my friends said regarding the bun, “The bun was terrible – like the Always Save buns at the grocery store. Dry and no substance.” To add to his bun comments, he thought the hamburger meat was average at best. The fried onions he ordered could have used more time in the grill. Overall he was disappointed with the burger after hearing great things about it. I was kind of in the same boat even after one friend warned me to keep expectations low.

Another friend felt that over the past year, their meat quality has been lacking. It’s been more gristle which she hates. But she does love the atmosphere and fried mushrooms and thinks it’s still a good burger. Her family still votes Timbuktu their favorite burger place. Her husband added that the staff is very kid friendly.

The one sentiment we all agreed on is that cash only sucks. One of the guys didn’t even know about that and fortunately one of our friends is a Mexican Drug Lord and was able to spot him the money; that or he just likes to carry cash on him at all times.

Timbuktu has the atmosphere that many bar patrons who like to just go somewhere and have a beer and chat with friends would love. It’s comparable to the old Cedar in many ways. I wish there was a place like that within walking distance from my house. The burger, at least in most of our opinions, is not something you’d go out of your way for. There are so many reviews out there that describe this place as “The Best Burger”. It may be on their list of the best burgers but it’s not on mine. My advice? Keep your expectations low if you decide to venture to A-Town as many of my Andover friends describe the city.