Home Experiences Black Friday 2012: I Came, I Saw, I Survived
Facebook
Twitter
Pinterest
Linkedin
Email
Black Friday 2012 has come again.
Once again I just had to leave my house and check out the excitement. This year I was accompanied by three friends who were willing to start the late night shift on Thanksgiving Day. One of those friends has been a long time Black Friday veteran with me. Two others, I know have gone out for Black Friday but never with me.
This year, Black Friday started earlier than previous years. Retail stores are trying to get competitive advantages by opening up earlier and earlier on the holidays. Unfortunately for co-workers it means less time with their family. A friend of mine works retail in Canada and told me, that’s just the way it is and he wouldn’t be surprised to see them open even earlier next year. Luckily for him, there is no “Black Friday” in Canada.
Starting the day off at my rents for a lovely Thanksgiving lunch, I browsed through the Thursday ads to see what was good and if anything was worth waiting in line for. Only one item caught my eye: a 50 inch LED TV for $299 at Sears. An LED for that price is unheard of. Then I read the fine print, something along the lines of Limit 4 per store. Sears opened up at 8 pm that day.
After finishing lunch, I decided to go drive by the mall just to check out the scene. There were about 15 cars at Old Navy around 2:30 pm. Drove around the mall to see how Sears was and about 25 people deep at that time. Right across the street a line was already forming at Target for whatever deals they had going on. My chances are scoring a 50 inch LED TV were nil. But……. That didn’t stop me from wanting to go see the craziness.
A short little text message to my friends to meet at my place around 8 pm and the plans were set. Didn’t think it was worth meeting earlier since I didn’t want to deal with the mad rush. By 8 pm, my friends were over at my house and the Patriots were upon the Jets 98-0 (or something close to that it seemed). We drove over to Sears and as expected the Mall parking lot in front of Sears was jam packed. I don’t have a conceal and carry so my safety was entrusted to my friends to protect me along with my Tae Kwon Do skills from 5th grade. (Green Belt Blue Tip in the House!!!!!)
Upon walking in Sears, it was a mad house of people. Most people were in the electronics section probably looking to score a TV. We browsed around the other aisles just to see what else was on sale but nothing caught my eye. At one point while talking to my friends, I said, “Let’s get out of here; some of these people are weird.” Only problem was, I was made eye contact with a female sales associate probably 17 years of age when I said it and she was looking at me at the same time. She thought I was talking to her.  It was time to leave…….. with my friends, not her.
We contemplated going over to Target but decided on checking out Wal-Mart. They had some guaranteed door buster sales that as long as you were in line between the hours of 10 and 11 pm; you were guaranteed to get whatever product you were in line for. Options were a TV, a DVD player, and something else, I forget. 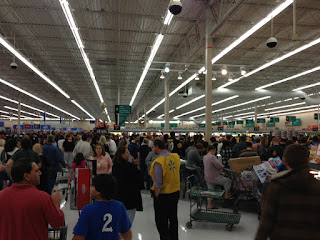 Wal-Mart (East Kellogg) parking lot was possibly a bit crazier than Sears. When we walked inside, it was definitely busier. There were a huge circle of people around the front produce area, lines and lines wrapped around each food aisle for televisions. I thought three things while walking through the large mass of people
1.)    One would think Justin Bieber was here
2.)    I don’t need a TV that bad
3.)    It’s too bad deodorant isn’t on sale because there are some stinky people here

Maybe it was the hundreds of people building up heat inside Wal-Mart but there was some major body odor when people passed by me.
We were off in cosmetics looking around when 10 pm hit but when it did, you could hear the hordes of people from a few hundred feet away. I wish I recorded it. I ended up not buying a single thing that night. My fellow Black Friday Vet and I who always do most of the shopping didn’t buy a single thing while our two other friends waited in line at Wal-Mart to make their purchases. One friend was actually smart and offered a lady a few extra bucks to make a candle purchase for him which she obliged.
I took some great snapshots of people while waiting but probably shouldn’t post them here. I would end up waking up around noon on Friday and shopping at the mall and Target when it wasn’t as busy. The only place that I saw lines at was Old Navy.
Oh and my favorite purchase of the day? The Pasta Boat
I’ve already used it twice. That made it all another very successful Black Friday experience.
Happy Holidays Folks.

My time volunteering with Meals on Wheels