Home Asian Sit @ Thai Express: First Impression (CLOSED)
Facebook
Twitter
Pinterest
Linkedin
Email
Update: Sit @ Thai Express is now closed
First blog of the New Year! I’ve had lots of e-mails (and texts from the people that know me) asking if I’m ever going to blog again. Thank you for those. It’s nice to be heard sometimes. So let’s get this show on the road!
I’m a huge Pad Thai fan. I’ve had it at numerous restaurants around Wichita. If it’s on the menu, I’ll give it a try. If it’s frozen at Dillon’s, I’ll give it a try. If it’s on the QuikTrip buffet line next to the hot dogs and corndogs, I’ll give it a try. If I see a to-go container sitting on a bench next to a homeless guy, I’ll ask the homeless guy for a bite.
There’s this little Thai spot at the corner of Central and Oliver. It was open for a while, closed down, and is has been back open for the latter part of 2012. That place is Sit @ Thai Express. 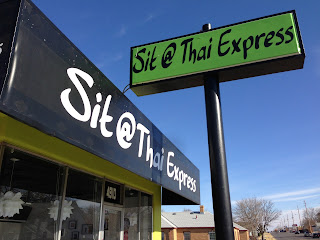 Sit @ Thai Express
4910 E. Central Ave.
Wichita, KS 67208
316-351-5856
You can view their full menu at http://sitatthaiexpress.com – Kudos to them for the online capabilities. I do not like it when restaurants do not have a way to view their menu or hours of operation online. I could always ask Siri, but I want to see pictures too. 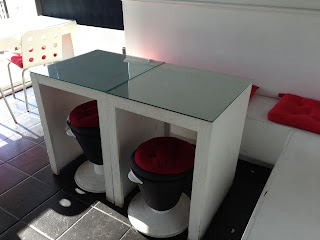 I went there for lunch and it’s very small and quaint inside. Capacity is probably around 17-20 seats. I’m no interior decorator or design major, so I’d describe the inside as modern and Asian (ironic huh?). White tables everywhere, low seating, not extremely comfortable but I guess the goal would be to get people in and out.
Sit @ Thai Express is a fast food type of place. They have a drive thru option for those on the rush. For lunch, I decided to go inside and eat and check out the “digs” (that’s what all the cool kids are saying these days I’m told). I ordered their Pad Thai meal which came with a salad, rice, eggroll and the actual Pad Thai.
Seconds after ordering, the lady brought me out their house salad. Wasn’t exactly what I was expecting. If there is a singular version of the word “Salad”, that’s what I’d be using to describe their salad. I was done eating it in two bites. There’s a good chance the lady who took my order looked at me and assumed I was ordering from the kid’s meal with my youthful appearance.
Next was the meal itself which came out pretty quick. The steamed rice was what anybody would expect; that’s hard to mess up. The eggroll could best be described as ok. For anybody who’s read past blogs, I have high standards for eggrolls and have never found one that could compete on the level of what my family could make. So I would never listen to me on reviewing a restaurant’s eggrolls. I’m completely biased. Last and unfortunately probably least was the Pad Thai. I say this because from the first couple bites, I was not a fan. The Pad Thai tasted burnt. From the noodles to the meat, it was all charred tasting. Was it because it’s a fast food restaurant and the cooking was rushed? I don’t know; I’m not a cook. After eating a quarter of the meal, I couldn’t finish it and just left it. 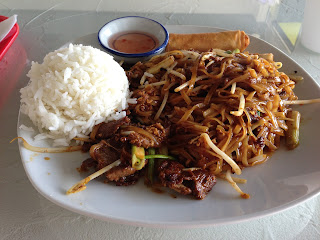