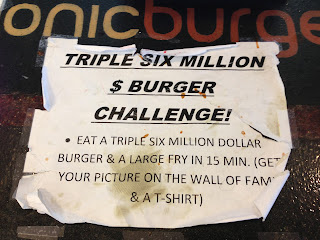 There comes a time in every man’s life where they question the reason for their existence. Is it to serve your country and fight for freedom? Is it to preach the word of the religion you believe in? Is it to raise children to become future leaders of society? Or is it to eat a 2 and a quarter pound hamburger and a pound a fries in 15 minutes? 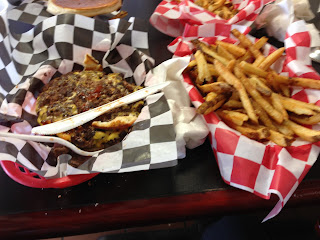 I let my family, friends, readers, and most importantly Wichita down.

It was hard to fight back the tears that wanted to fall from my eyes but in all reality, I think it was burger grease on my face. I felt defeated.  My throat felt numb. One employee told me not to throw up; I looked at her and just smiled.
I grabbed a to go container and figured I could feast on my leftovers for three days or stop by the homeless park and just drop it off. The worst part of it all? I did this during my lunch hour and had to go back to work. Stupidest idea ever. I should have waited until after work.
I’ve done spicy wing challenges before (read here) but I feel like this burger challenge was harder. I’m not sure I’ll ever do a burger challenge again. Wait…..what am I saying, I’m sure I could be talked into it later in life.
It’s true though. There comes a time in every man’s life where they question the reason for their existence. Mine is not to complete a burger challenge.