UPDATE: This restaurant is now closed.
I’m a true sucker for trying foods that I have never had before or that I rarely ever get the chance to eat. There’s one cuisine I haven’t had in over two years and something I’ve been meaning to try again for the longest time. So when I heard a new restaurant opened up in the past year on the east side of town, I put it high on my list of restaurants that I needed to try out.
When the opportunity presented itself to go here for lunch, I jumped at it and that brings us to the latest food blog.
Restaurante Antojitos Salvadoreno
2117 E. Central
316-269-4090 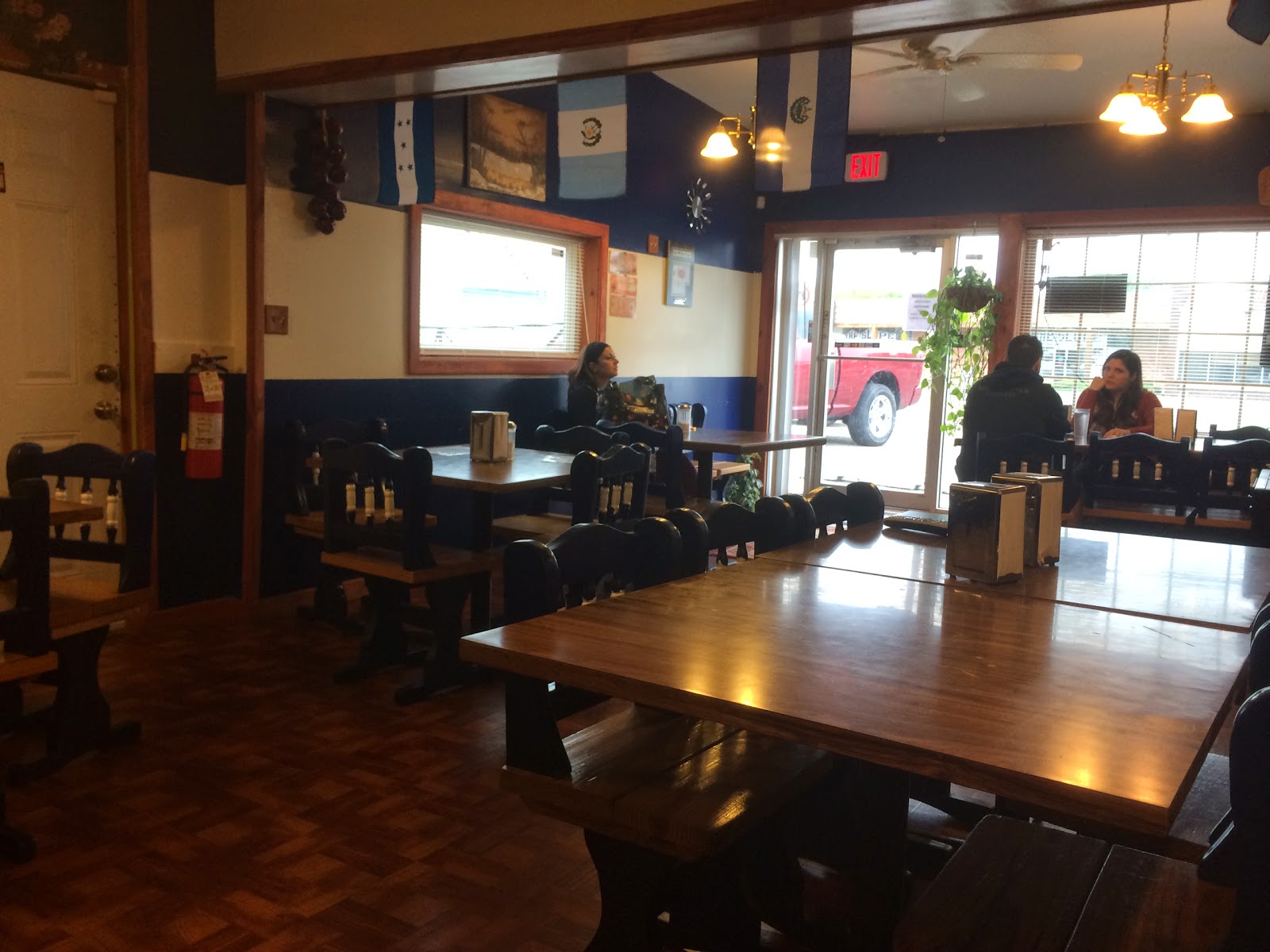 Antojitos Salvadoreno is a newer restaurant near Central and Grove that specializes in Salvadoran Cuisine. They are only open Tuesdays through Sundays from 10 am to 10 pm.
My friend and I stopped by for a mid-week lunch. Just by pulling in, she had a small concern as the restaurant has that sketchy dive restaurant look to it. When you walk inside, it’s a totally different experience. It was bigger than we thought. That day for lunch there were four other people eating when we arrived. Place wasn’t busy at all. 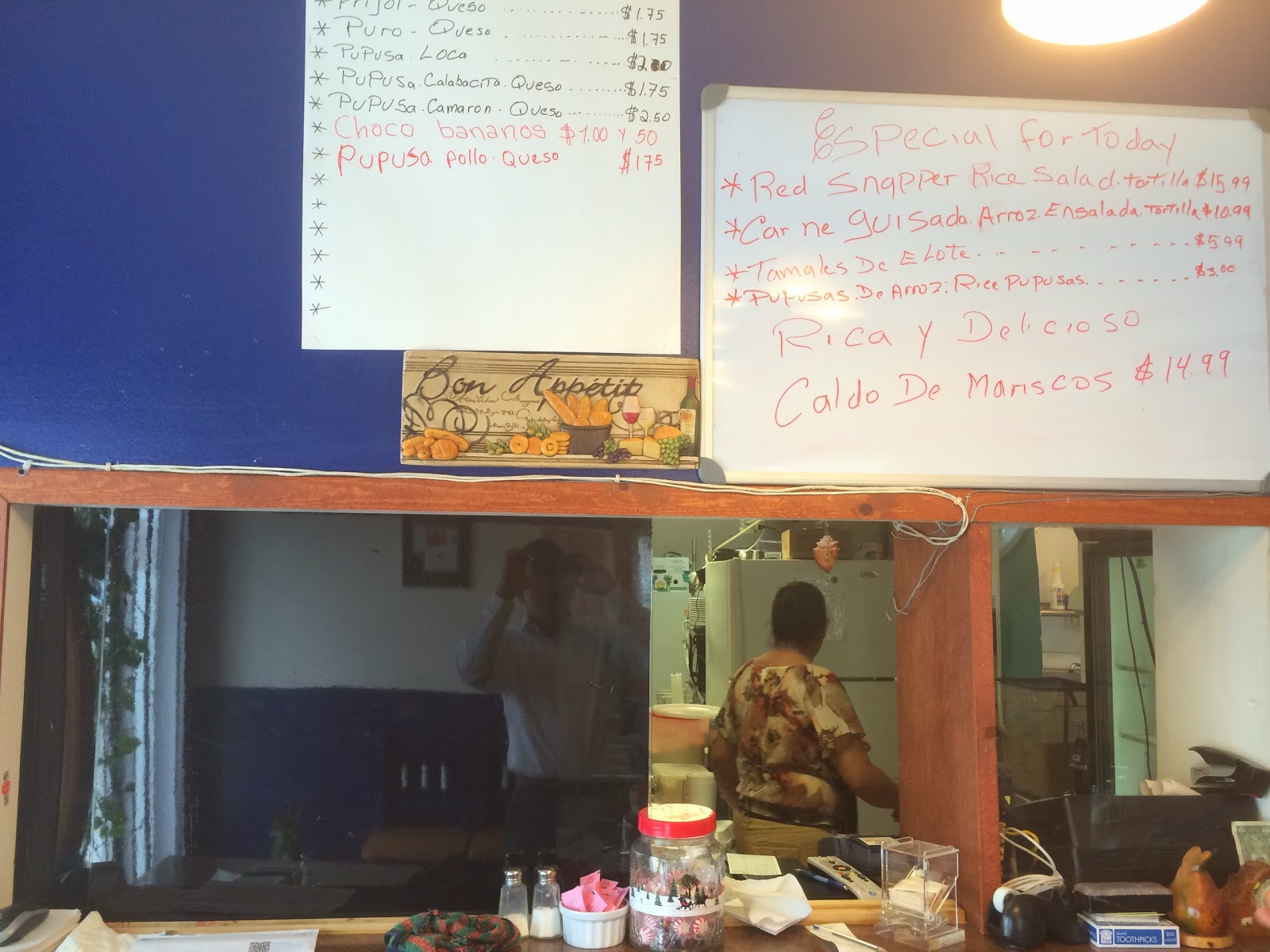 Our server greeted us immediately, sat us, and took our drink order. He also handed us their one page menu (front and back) that consisted of 25 food options. I already knew right away I just had to order some pupusas. You can’t go to a Salvadoran restaurant and NOT order them. So I asked our server what their three most popular pupusas were and he recommended the following menu items:
#1: Revuelta: chicharron con queso: pork and cheese
#3: Frijol con queso: beans and cheese
#5: Pupusa loca: crazy pupusa: pork, cheese, beans lorocos 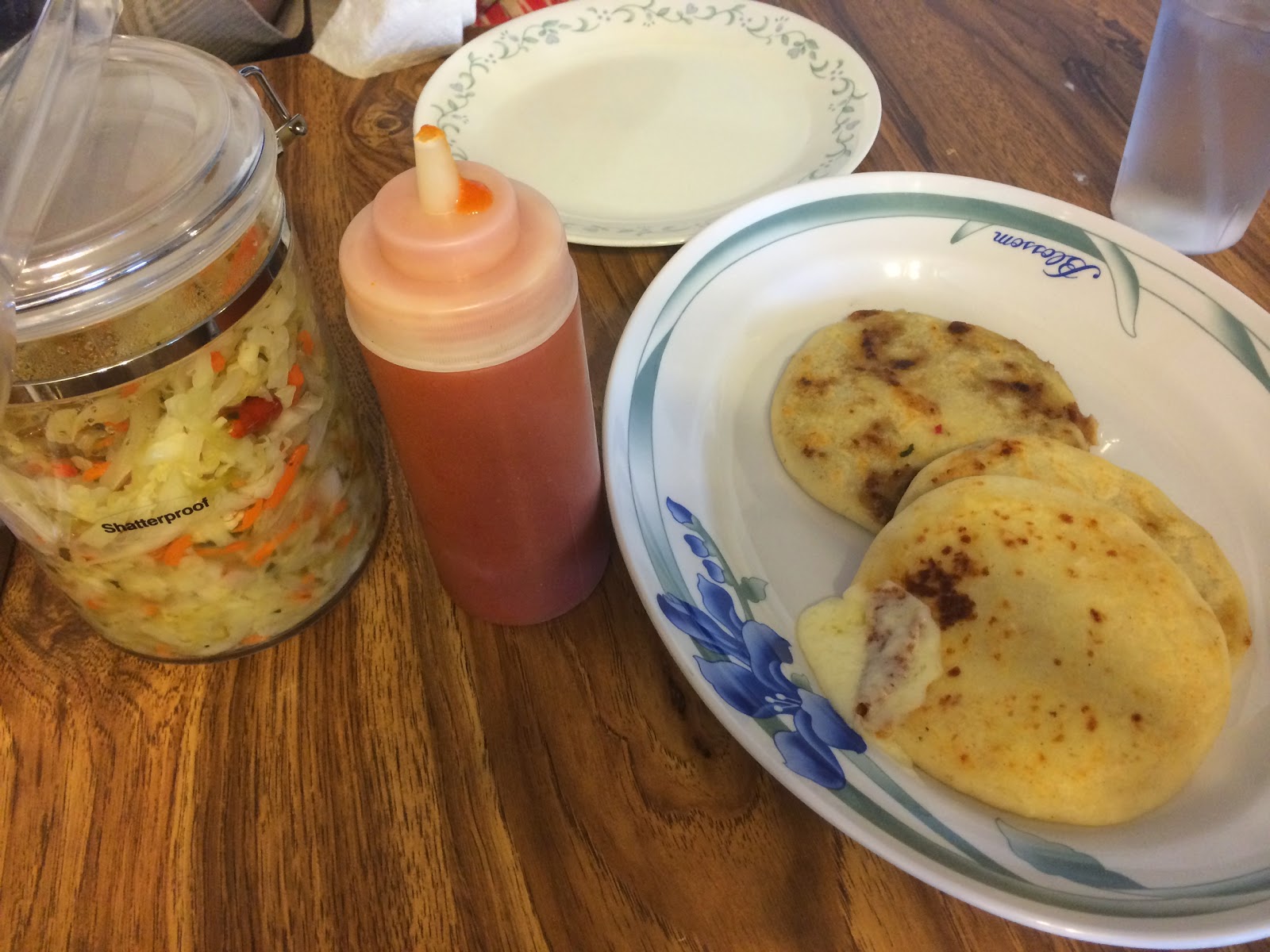 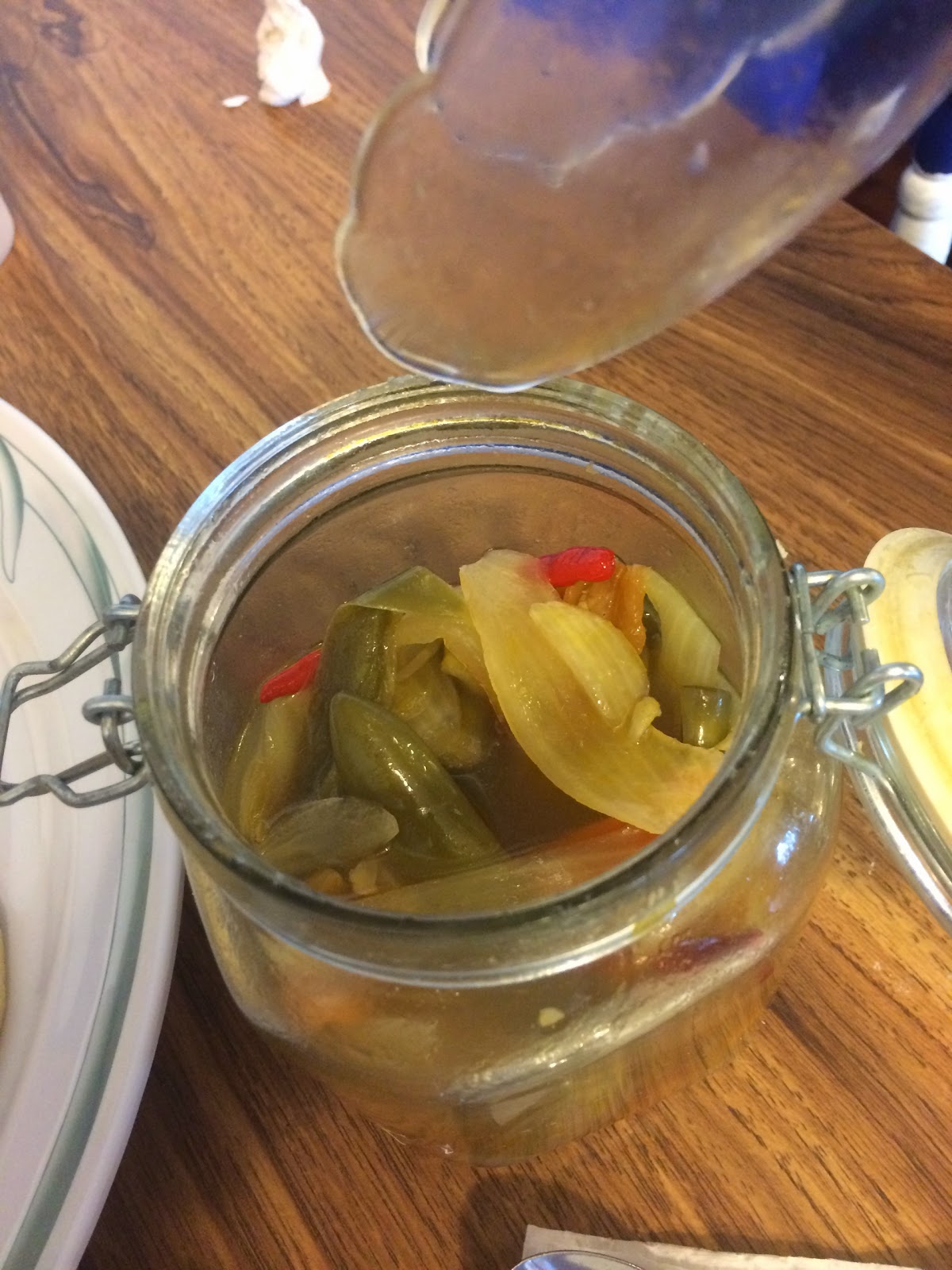 We figured, why not? We ordered all three. The pupusas came with pickled cabbage and a jar of hot peppers and vegetables that were all spiced up. All three pupusas came on the same plate which we didn’t mind. We took one bite of each in order and the Pupusa Loca was by far the favorite from both of us. The Revuelta was alright, I ate small bit of it as it looked pretty cheesy. The third pupusa was a messup and they accidentally gave us an all cheese pupusa so I didn’t touch it at all. My friend had all three and enjoyed the pupusas but #5 is the go to if you ever stop by here. Make sure you add some pickled cabbage on top of it, very delicious. The jar of hot peppers is as advertised, very spicy. 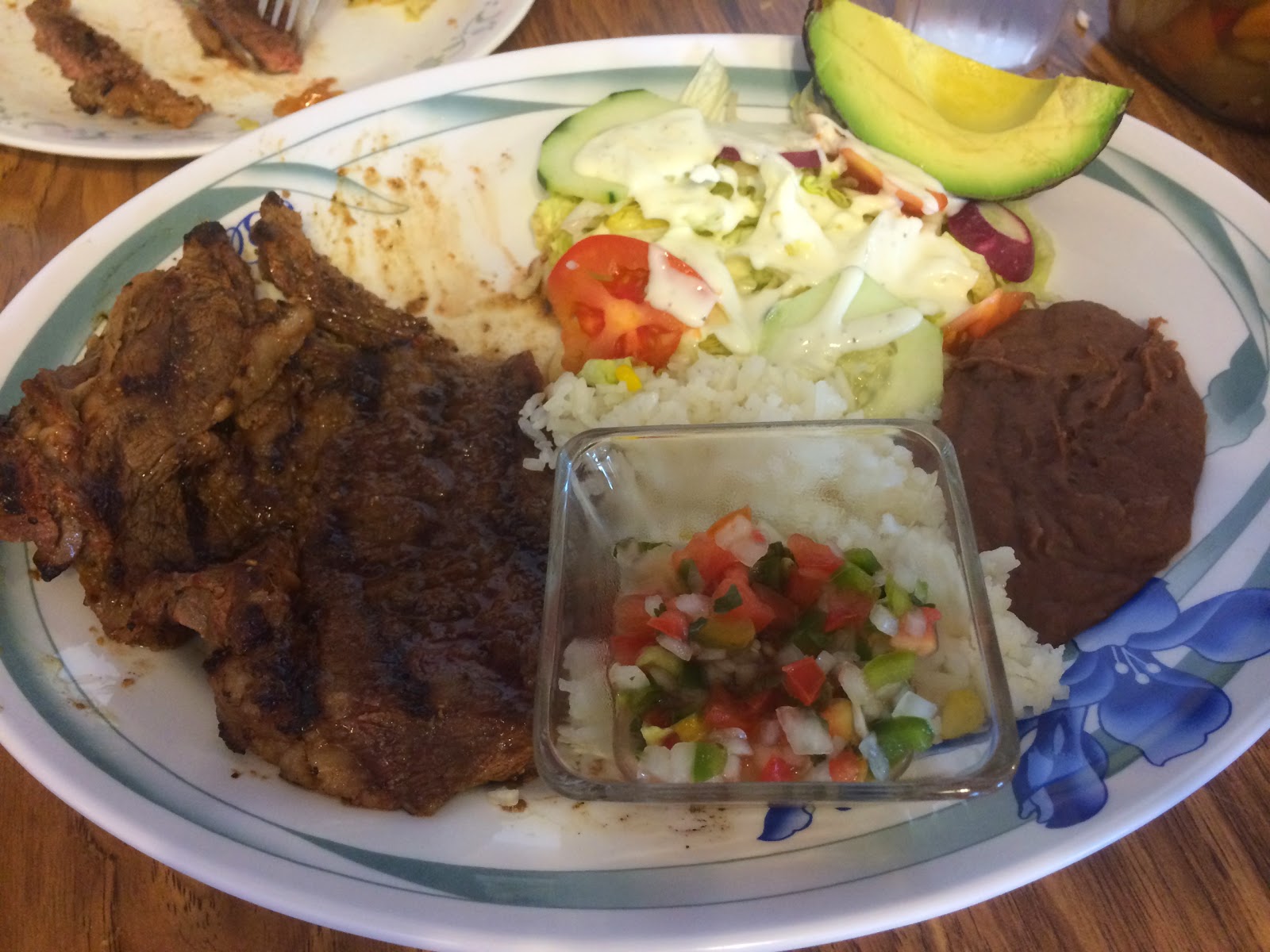 After the pupusas, it was quite filling so we decided to split a lunch entrée order. We went with #18 Carne Asada (arroz frijol ensalada pico de gallo aguacate; rice, beans, salad, pico de gallo, avocado). For as little people in the restaurant they had at the time, our lunch order took a LONG time to come out. Not sure what was taking forever as our server never came out to let us know the hold up. From walking in to leaving, it was well over an hour which is way too long for what we ordered.
Once the carne asada came out, it was a big plateful of food. My friend felt the carne asada was cooked to her liking. I felt it was ok but nothing to write home about. Mixed up some tortilla, carne asada, pickled cabbage and called it good for lunch. 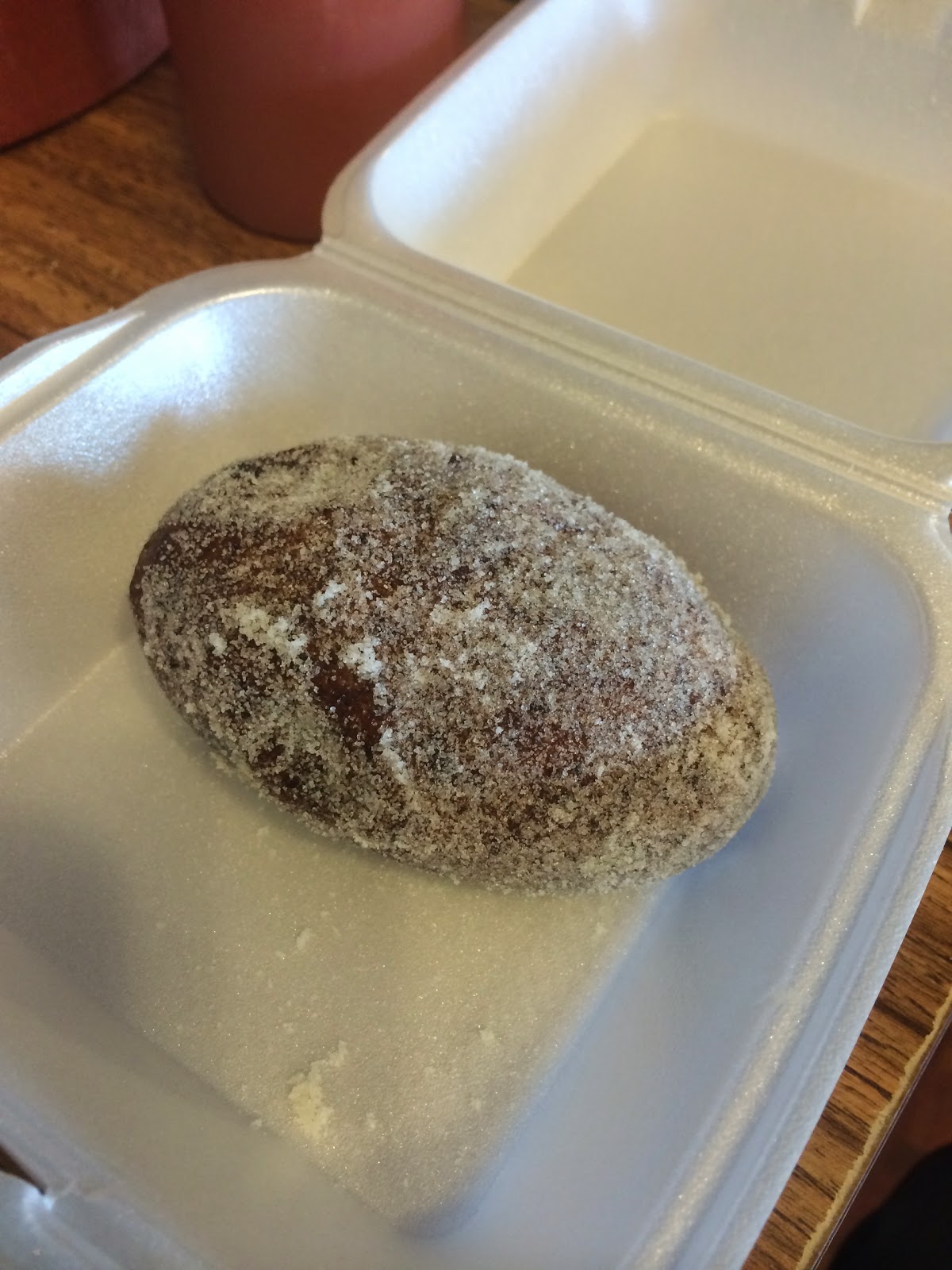 To end lunch, our server recommended an Empanada de platano. It looked to be a cream filled empanada. He said it’s a good sweet menu item to end on as a dessert. At $.1.75, we figured “what the heck.” We had to order it to go though as we were running short on time. We split the empanada later and both thought it was ok. Our opinion could have been swayed as we didn’t have it fresh as we had to take it with us. So take that for what it’s worth.
Overall, we were in general agreement that the pupusas were great, the service was friendly but food took longer than it should have, and the prices are good. Pupusas run around $1.75-$2.50 a piece and lunch/dinner items run $8.99-$22.99.
It’s definitely an alternative to Usuloteco (read the Wichita By E.B. review here) for those that don’t want to make the drive out south. I’m sure I’ll give this place another try to see if they can speed up their service levels.
Here’s the menu: 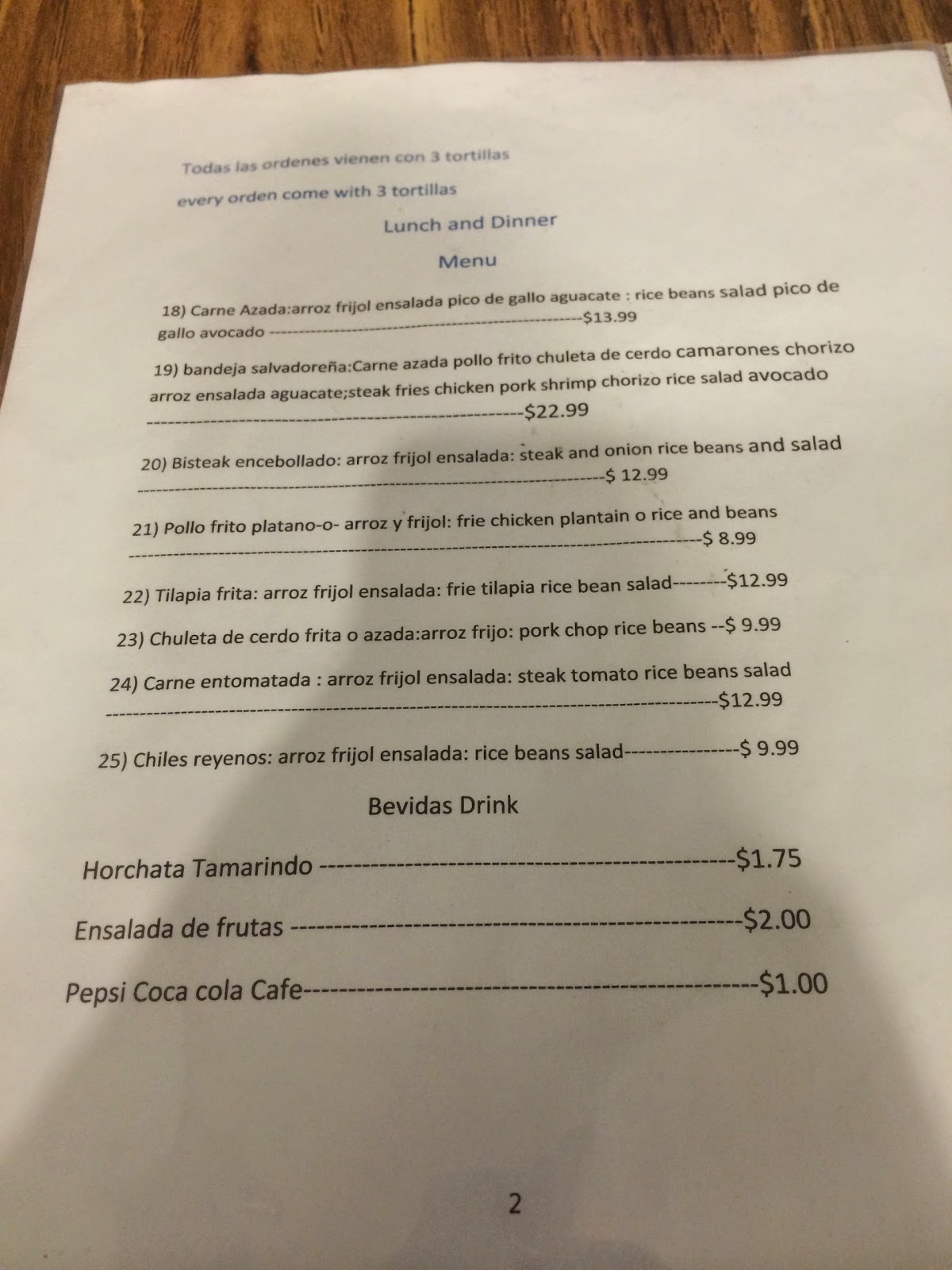