Since 2011, Flying Donuts have been on my way to work yet I’ve never made the effort to stop by for some doughy goodness. It’s likely because I’m not a morning person and squeeze every ounce of sleep I can fit in before it’s time for me to start my day.

So stopping in somewhere to grab breakfast is a 3-10 minutes stop which is the equivalent of a couple snooze buttons for me.

Flying Donuts is located at 4618 E Central, near the northwest corner of Central and Oliver. They are open Tuesday – Friday 5 am – 1 pm and on Saturday and Sunday from 6 am – Noon. Closed on Mondays.

Luckily one day, I woke up early and couldn’t get back to bed. Figured I might as well just get ready and go grab breakfast somewhere. I forgot a while ago I purchased a Restaurants.com Coupon here for Flying Donuts. There is no human way I could eat $20 worth of donuts…..well in one sitting at least so I purchased a big ole box of donuts for my coworkers. 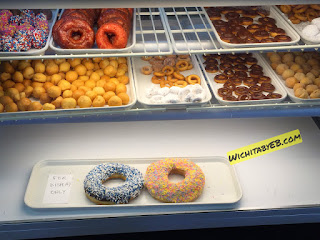 The lady at the counter asked me what kind of donuts I wanted and the only thing I could think of was the Maple Bacon donut (which run $1.99 a piece). I told her just to surprise me because the selection was just too much. There were apple fritters, donut holes, long johns, creme filled donuts, etc. I’m not a morning person and have a hard time making decisions before 9 am. I consider it a success if my socks match in the morning (thus why I keep spare socks at my desk, clean of course). I didn’t even bother to ask about price. She could have charged me $50 and I wouldn’t have blinked because well……I was still mentally asleep.

For those curious on pricing, I have pictures of the menu at the end of the blog. 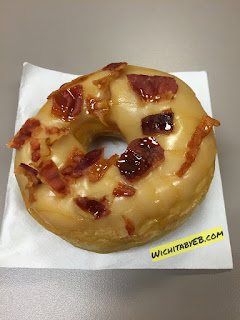 I was in and out in about ten minutes with a big box of donuts and two little sacks of donut holes. Unfortunately the smell was so tempting that I opened up one of the little sacks and just started downing donut holes as if I were chugging water out of a bottle. It was probably a pretty disgusting sight to see for any drivers passing me while I was going 5 mph with a mouth stuffed of donut holes.

By the time I got to work, I went from 24 donut holes to 15. They were that good and I felt that unhealthy. 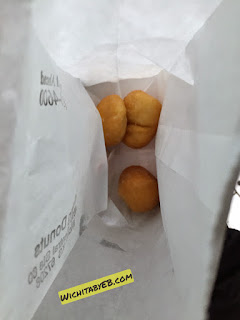 When I bring stuff to work, I always keep note of what goes by the fastest. Anything chocolate related went by quick like an apple in the Garden of Eden. The sugar coated donut holes were the next quickest to go. People were intrigued by the maple bacon donut and would always cut at least a fourth of the donut with a knife to feed their curiosity.

I received comments on the maple bacon donut from “delicious”, “yummmm”, “that was not what I expected”, “it was sweeter than I though it would be”, and “interesting……” as they grabbed another fourth. The consensus of the maple bacon was that if it was less sweet it would have been much better. I for one liked it and pulled a whole one aside before they ran out.

I sampled other donuts like the apple fritter and the boston creme; how I managed to fit all that in before lunch is still a mystery to me. The apple fritter was my favorite of all the donuts I sampled (sample sounds so much better than gorge).

Overall, Flying Donuts is a great addition to the selection of quality creative donut spots in Wichita. If I can ever manage to get myself out of bed sooner than usual, I would go again and grab myself an Apple Fritter.

Have you been? I’d love to hear your thoughts. 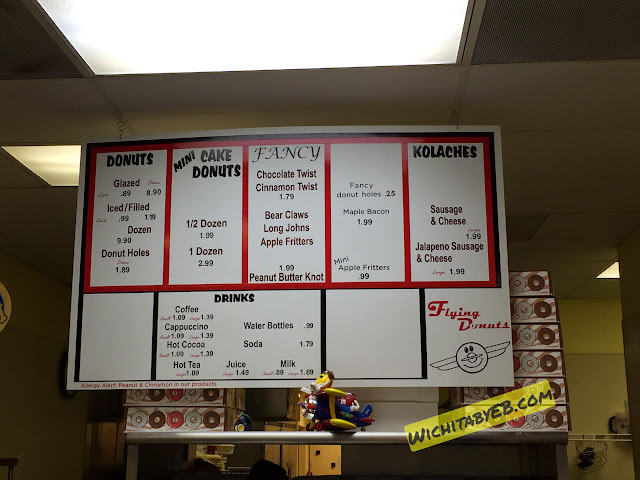 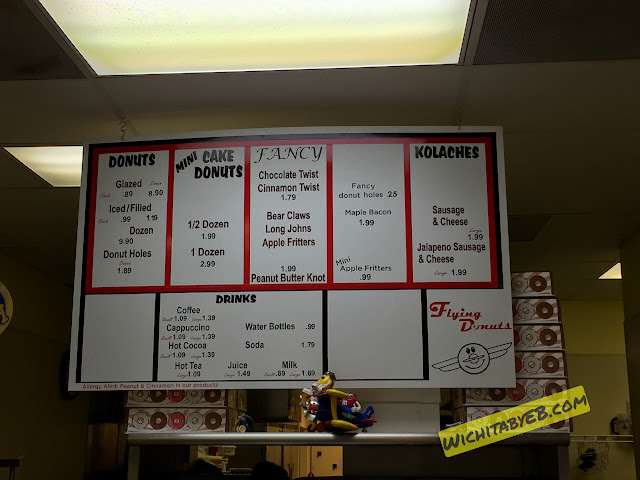