For the past two months, I’ve been trying to get the logistics put together for my friends and I to determine where the best hummus is in Wichita.

Well……it finally happened sort of. Looks like nearly every place was open on Saturday at 11 am. After calling back again it looks as though only once place was closed over Memorial Day weekend and that was M.I.F. Deli. By this time it was too late, I had already gathered friends together and determined a meeting point. So of all hummus that was purchased, M.I.F. was purchased the night before, stored in a container and within a ziplock bag and refrigerated.

I’d like to thank Jason, Emily, Kim, Nicole, Justin, Kristin, Luke, Greg, Deanna, Samantha, and Brandon for all assisting me in driving around town purchasing hummus from various locations. And once again to Brandon for getting me the location to have this little shindig at. Everybody was given a location or two to pick up hummus from and have it at our meeting point in an hour. 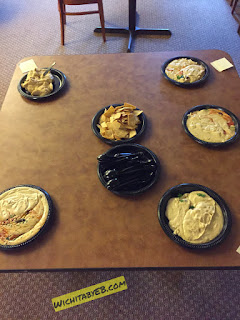 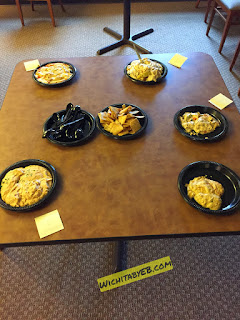 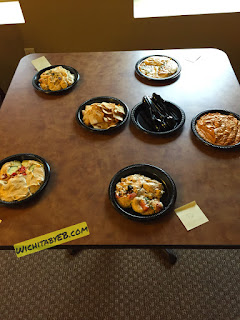 The hummus was transferred from the container it came in to a plate that was numbered. Everybody was given a voting sheet and told to rank their favorite six hummuses. The key was to vote just on flavor alone. They were allowed to use a pita chip to taste test each hummus or use spoons set out. So after $160 of hummus, an hour of tasting and never wanting to eat hummus again for the longest time, here are the results of the Best Hummus in Wichita as decided on by a dozen people:

In order from worst to first:

This was the only hummus that received a single Top 6 vote.

Voter Comments: Good but nothing else to say really – Pickly Vinegar Taste – Sour and Not Bad but Not Great – Lemony – Very Assertive Taste

Voter Comments: Good, not just a plain hummus – Really like the heat – Spicy but good and bold – Good flavor – Peppery, Smokey, Spicy – The only one with a kick.

Voter Comments: So good – I liked this; nice texture and balance – Very well done – Mayo flavor with pickles – Good flavor and blend of spices – Is this Bella Luna? – Great balance of flavor

which leaves us at the best hummus as determined by the voters:

You can see opinions ranging everywhere on the hummuses. I think most people will be shocked that Meddy’s finished second on this list; I know I was.

Before I started the project, I was told that Byblos, Cafe Maurice and Bella Luna would all score very high on the list. Oddly enough, the lady who told me was correct as all five would finish in the Top 5.

I’m sure people will have some differing opinions. My reply to you would be, go get all 15 hummuses yourself and try a blind taste test and see what happens.

Overall it was an interesting project to do. I guarantee most people won’t even be able to decipher what hummus is from what location. Having all 15 hummuses was nice to taste and be able to distinguish which ones tasted better than others. By the end of of it, I believe everybody was hummus’d out and not wanting to have hummus again for a long time!

I want to thank everybody for helping make this event and blog possible. My friends are all awesome. Its nice to have people around who will assist me in blowing money, time, and stomach pains to answer questions I have like where is the best hummus in Wichita.

3 thoughts on “The Best Hummus in Wichita!”