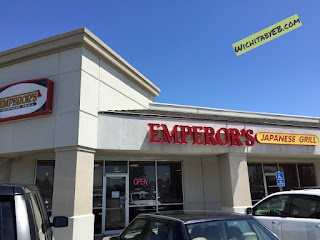 11330 E Central
Monday-Saturday 11 am – 10 pm
Sunday 11 am – 9 pm
I have many friends who make many visits to the east central location and speak good things of it. I’ve actually been to the east Central location before but it was so long ago and don’t remember much from it. I’ve had takeout delivered to me and remember it being a near truckload of fried rice at a cheap price.
One of my friends, Kate, is a huge fan of Emperor’s Japanese Grill so I enlisted her services in reviewing this restaurant that considers themselves to be the same quality of many Japanese Steakhouses in the city but at a great price.
For the purposes of this review, we attended the east central location. When I arrived, the line was about 14 people deep for lunch time. I was impressed with how busy the place was and that could only speak good things of the food. 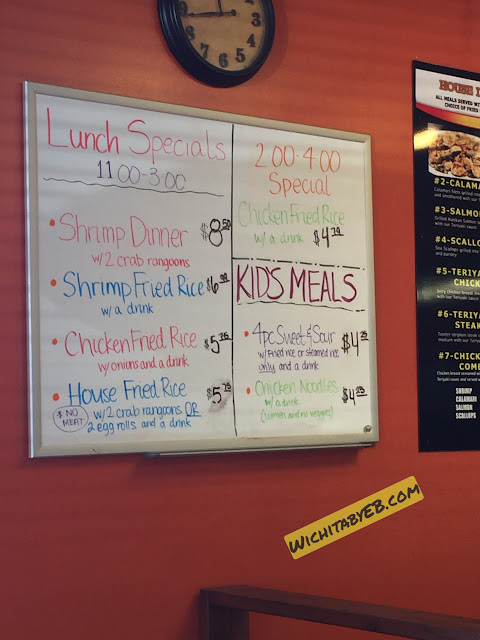 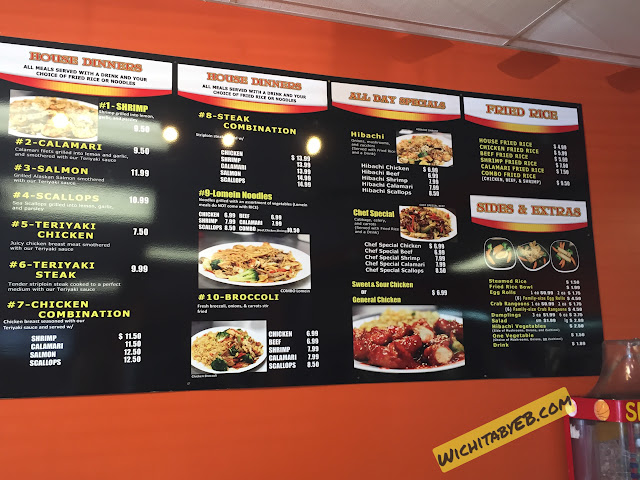 I had a good amount of time to review the menu and look at their offerings while in line. One thing is for sure, their prices are very competitive and affordable for lunch. Roughly $6 for a huge plate of fried rice with a drink is a good deal for the quality they are advertising.
For lunch, I ordered a side salad with ginger dressing, the hibachi chicken and an eggroll. Kate had the chicken fried rice with extra garlic. Once you order, they hand you a number you take to your table and they bring the food to you. I forget how long the food took but I don’t recall it being too long or super quick. But for how busy they were, the wait for food wasn’t bad at all. 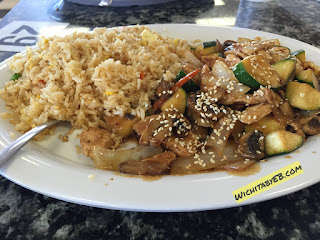 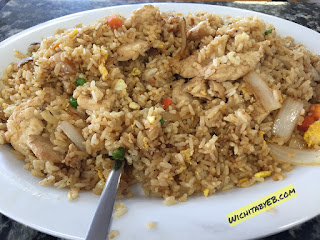 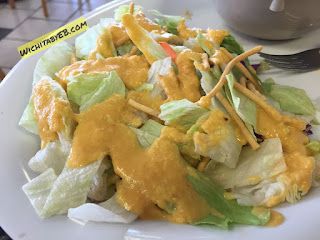 The salad itself wasn’t anything overly impressive. It was your basic greens along with some ginger dressing. But for the price of $1.99, I felt it was a good deal for what I got. I love me some ginger dressing so if it’s available I’ll likely always order it.
My hibachi chicken was $7 which included fried rice and a drink. Not sure if any of you readers are familiar with the Samurai Japanese Grill that closed a while ago at 37th and Woodlawn. It was slightly better than Samurai’s but I wouldn’t call it the quality of steakhouses in Wichita like Sumo’s or Sal’s (reviewed here). Still for the money, I would say I enjoyed my meal; good quality chicken and above average fried rice.
The eggroll, I was less than impressed with. Wasn’t much flavor to it, lacked anything of substance, and left me unsatisfied.
Kate, who’s been a huge fan of Emperor’s, said her chicken was dry and the shrimp is a way better choice. She forgot about that and should have ordered that for lunch. Still, she’s a big fan of the fried rice and considers it the best in town.
I try to be as honest as possible in these reviews and try to call a spade a spade. Regardless of what their website says, I’d say this is close to fast food Japanese. While it’s not fast food in the sense like Dillons Chinese that everything is premade, Emperor’s is made fresh to order but at the same time does have a “fast food” feel that it’s quick to order and quick to get your meal. The prices are cheap and don’t have a cheap taste to it but also don’t have the “best quality Japanese food in Wichita” taste to it. You know what you’re paying and get better quality than what you’re paying if that makes sense.
Emperor’s Japanese Grill is a good affordable quick option for those of you who are in the mood for some Japanese food in the city. With three locations with long hours, they cover a good segment of the city so you can pop by any time.
Obviously Kate recommends it and I would too.
Happy Dining
Like Us On Facebook Today!