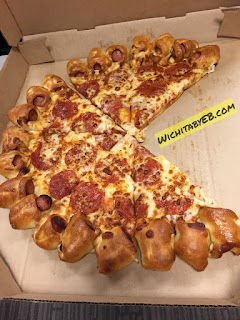 A couple months ago, Pizza Hut unveiled a Hot Dog Stuffed Crust Pizza that was not available in the United States. If you look at the pictures of the crust, the hot dogs were stuffed into the crust similar to the cheese stuffed crust pizza. 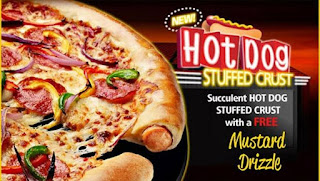 After months of an agonizing and impatient wait, the Hot Dog Stuffed Crust Pizza has hit the states. News hit that the specialty crust would arrive officially on June 18. Being the loser I am, I called every day this week to different locations in Wichita to verify it would be here. I was given different dates by different stores but was told by most June 18 is when I could order the pizza.

The very first thing I did Thursday morning was check online to see if it was available and lo and behold it was. There was a catch though. The pictures I saw advertised originally were much different than what was being shown online at Pizzahut.com

Pizza Hut’s site called it Hot Dog Bites Pizza. It looks like instead of a hot dog being stuffed in the crust all around the pizza, little hot dog bites were attached to each slice of pizza. After all this wait, I figured I might as well order it. I was able to talk some coworkers into trying the pizza with me even after some angst. For some reason, people think hot dogs and pizzas don’t match. Hey, I tried a Chinese Burrito at China Go so why wouldn’t I try a Hot Dog Bites Pizza?

A Hot Dog Bites Pizza is $11.99 + tax, if you want to order a specialty pizza like a Supreme it’s $4 more. I forgot how much delivery was, between $2-3 then tip. We went ahead and ordered a Pepperoni Pizza and set the delivery for 10:30 am. Our delivery guy even came a little early, he told me that we were the very first order of the Hot Dog Bites Pizza.

Upon opening, my face was covered with excitement. It was like Christmas Day and my gifts were packed into pizza boxes with no gift wrap or bows. (Hmmmm…..reusing pizza boxes for Christmas wrapping……might have to try that this year………..).

There was a buzz going around the office. People walking by ooh’ing and ahh’ing at the site of the Hot Dog Bites Pizza. People were curious. People were grossed out. People were inquisitive. 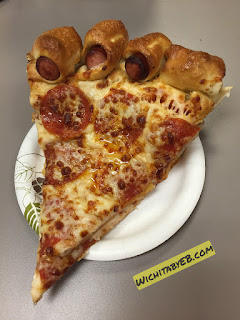 The pizza came with a big ramekin bowl of mustard to dip the pizza bites in. 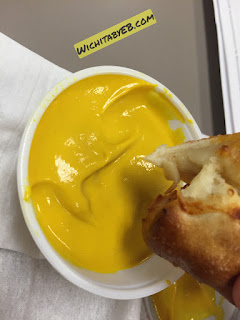 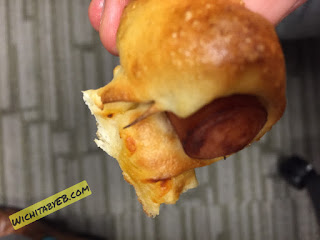 By now people know whether they like Pizza Hut pizza, so let’s get into the actual hot dog bites. My first bite in and I knew I liked it. The tiny little hot dog bites had good flavor and the breading around the hot dog was tasty, felt fresh and had a soft pretzel feel to it.

Many different people tried the Hot Dog Bites and not a single person had a bad thing to say.

“The breading around the hot dog tastes like Auntie Anne’s.”

“My kids would love this.”

“In the world of mundane pizza options, the Hot Dog Bites Pizza stands out” (No he doesn’t work for Pizza Hut).

It’s an interesting and unique spin that really separates the hot dog bite and the pizza. It’s not intertwined so the flavors are apart and unique. This is something kids would probably love. The pizza bites can be pulled apart so children and me 🙁 who don’t like crust would consider eating it finally.

Don’t be grossed out. Live a little and give the Hot Dog Pizza Bites Pizza a try at your local Pizza Hut!