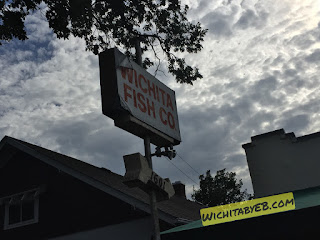 Many of the very original readers of the blog will be familiar with Dining by the Alphabet. It’s where we started off with Letter A. Chose a restaurant that begin with A, then went on to B, then C, and so on. Each restaurant was graded on a scale from 1-5 with 5 being the highest. Last we left off, we completed Letter V and by basic preschool education that means we are now at Letter W!

For Letter W, we head to 1601 W Douglas where Wichita Fish Company has been located at for many years.

According to their website, they have the largest variety of seafood in the state of Kansas. If you are a seafood lover and have tried seafood in and around the area, chances are you’ve already eaten our seafood since we provide most of the seafood to local area restaurants.

They are open Monday 11 am – 7 pm, Tuesday – Saturday 11 am – 8 pm and closed on Sundays. They also have a location in Haysville. For all the information on Wichita Fish Company including their menu, head over to http://wichitafishcompany.com/.

We went on a Friday early evening and was able to beat the dinner crowd before it started getting busy. One time I’d recommend not going is on Friday’s during Lent. I went once and literally a line out of the door.

Walking in they had a huge assortment of items to choose from on their menu. From the tilapia to the ahi tuna to the mahi-mahi, I really didn’t know what to choose from. So I asked the lady at the counter what the most popular item to order was. She recommended me the Southern Style Catfish Fillet. I went ahead and ordered that along with some (fried) calamari rings.

Kate went with the Cajun Catfish which was off of the “From the Grill” menu along with some fries because she doesn’t believe in eating vegetables from a place whose specialty is fried and serves everything in to go boxes. She also ordered a side of popcorn shrimp.

From the point of ordering our food to receiving our food, it took around 15-20 minutes. Everything looked really delectable when it arrived. 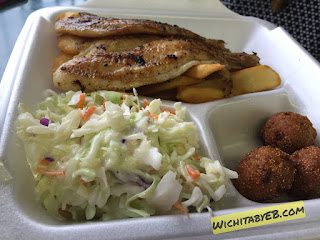 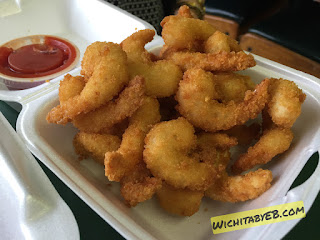 Starting with Kate’s meal She thought the catfish was seasoned really well. Not every bite was overly spicy which she liked. She orders Cajun catfish basically everywhere that serves it and she feels that Wichita Fish Company’s is the best so far. She was a huge fan of the hush puppies and felt they were DELICIOUS. It’s a must that I type that with all caps. The popcorn shrimp was better than average but not “to die for”. She really liked the aioli sauce served with her meal. I second the popcorn shrimp comments. They were good but not something I’d brag about to people. Her one complain was that they put the grilled catfish on the fries which caused the fries to be really soggy. 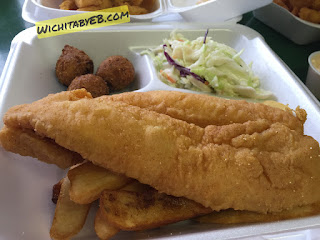 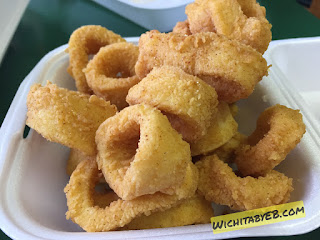 Moving on to my meal, my main focus was on the actual catfish. Fries were nothing really special; I’m not particularly a fan of hush puppies; and coleslaw is coleslaw to me. I’ll eat it all the time but I have no major opinion on it unless its fancy like jalapeno coleslaw. After a few bites in, I knew I really liked it. The breading was done so lightly that the catfish was still pretty fluffy. It broke apart easily that made it not taste so “bready” as with many other places. Sometimes when eating fried catfish, it taste so fried that it sits heavy on you. Such was not the case with the catfish filet at Wichita Fish Company. The aioli sauce was a fantastic condiment to dip it in. I would go ahead and say this was probably the best catfish I’ve had in a restaurant in town.

The calamari rings were similar to the popcorn shrimp in the fact that while they were good, it was nothing overly special. Would I order it again? Yes as I’m a fan of calamari.

Overall the food was really exceptional in both of our opinions. For the two meals and two extra sides, it cost around $34 which isn’t bad for a Friday evening dinner. It’s an even better value considering the quality of the meal we had.

The service was almost non-existent after we got our food. They take your order, bring you your order and that was about it. If you ordered a water or iced tea, they had pitchers at a table you could serve yourself. It’s almost to be expected at a place like that to keep overhead low. The service wasn’t bad at all but as Kate said it also was not overly exceptional.

In closing, we both left as big fans of Wichita Fish Company.

From the food and the value of it all, I would easily recommend Wichita Fish Company to anybody. It’s not the big upscale place that Newport Grill or Bonefish Grill are. It’s a low key, hidden gem as their site says, that anybody can go to and feel comfortable eating at in whatever they are wearing.

I look forward to going back again soon…………..just not on a Friday during Lent.

Lastly, I’d like to thank Kate on joining me for Letter W. Next up is Letter X, that is if there is an X. If not, then we move on to Letter Y.