After the long wait, the new Molino’s location has opened at 7817 E 37th St close to the intersection of 37th and Rock towards the northwest corner. Last year, it was announced Molino’s would be opening up a second location. After issues beyond their control, they were finally able to get it opened on Friday, July 10th to much fanfare.

I actually reviewed the original Molino’s location here back in June and had a fantastic experience there. I was interested to see how the new location would compare after eating at the original location within two weeks of each other.

How would they compare? I was about to find out…..twice! 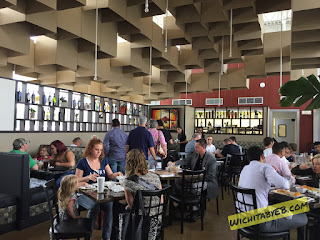 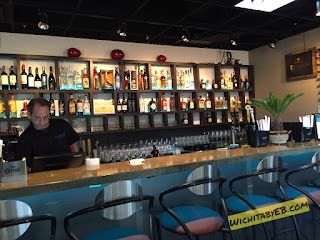 I should note that I went to the Grand Opening day, not just once but twice. Yes. I offered to go with a friend for lunch and already made plans to go with some other friends already for dinner before that. So I was really able to get a look at both sides of things from open to almost close.

The new location is very nice and modern. They feature a full bar and have a beautiful patio. Both times I went, they were busy but there wasn’t a line at either time I showed up. The tables are a little smaller and it can get cramped if you have a full table of four at one of their regular tables. I did find myself having to be aware of other customers moving in and out of their seat as not to catch an elbow or something. One thing Molino’s really did was maximize their seating.

For lunch, I went with a friend Greyson and his brother. (Note: I’ll post both lunch and dinner menus at the end of this blog). Greyson’s brother ordered the chimichanga. Greyson and I were willing to try some new things out so he ordered two piratas and I ordered three gorditas and we planned on splitting them. I know, how cute, right? Greyson also ordered a beer while I ordered the salsa sampler.

They quickly brought out chips and salsa along with the salsa sampler. One difference between the old and new Molino’s is they did not tell us which salsa was what. While eating the sampler, we had questions on what was what but no idea what was in each one. I did notice the owner going from some tables to tables explaining them but we never did. Our favorites were the two green ones in the middle but we have no idea what they were. Also Greyson never did receive his beer, we had to ask for that later again and remind our server. 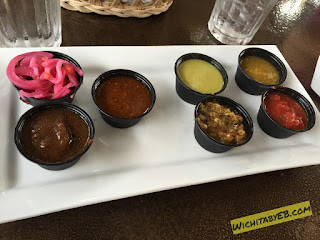 It took us roughly 45 minutes to get our food. Kind of a long wait especially for a lunch time but forgiven since it was opening day. Greyson’s brother found the chimichanga to be pretty good. He’s a big On the Border fan so he doesn’t venture out often away from there for Mexican and looked to be pretty impressed with not just his entree but the chips and salsa as well. 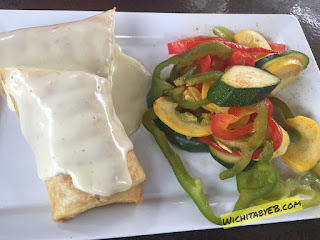 The Piratas were easily the favorite of the two items Greyson and I ordered. The Pirata to the right did fall off it’s holder and nearly poured a huge glob of guacamole on Greyson’s clothes but luckily it landed on the table. Otherwise, crisis averted and pretty pleased with it. I too liked the Pirata, it was even better with some of the hot salsa from our sampler.

The Gordita on the other hand was lacking in flavor. The chicken Gordita was pretty dry, the discada Gordita was very greasy with grease just dripping off the back end. The pork Gordita was probably the best and it might have been because of the salsa poured inside of it. 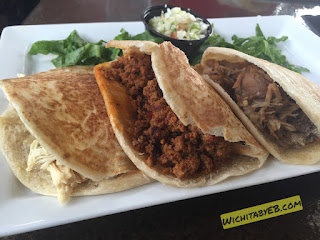 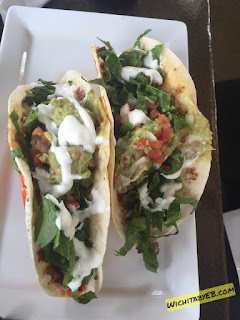 Tabbing out and grabbing a box also took a bit of time. Our server gave us our tickets, took our cards and then we would see her go bus a table or two instead of running our cards. Overall, it took us an hour and a half for lunch which is too long for lunch. Knowing it was their first day, we know there are kinks to work out. There were times our server would forget to ask us if we wanted more chips or a refill on our drinks or in Greyson’s case another beer while passing by our table multiple times. All fixable items in the future but the most important one to work on is serving times for food. Most people only get an hour or less than that for lunch so having someone there that long will turn away many people coming on their lunch hour.

For dinner I was joined by two more friends and happened to run into two more while I was there.

When we arrived for dinner, the place wasn’t full yet. We arrived before the dinner crowd hit and there were plenty of tables to choose from to sit at. Once seated, my friend Emily was quick to order one of their margaritas which was on special for $2.99. Soon after, two of the friends we ran into, David and Lisa, were seated by us and David ordered a margarita while Lisa ordered a draft of Pacifico. Those came out promptly with Lisa getting a bottle because she was told the keg was all foam. Emily really liked her margarita noting she as a big fan of the cayenne around the rim of her glass. David though it was just so-so.

The serving time for dinner went a little longer than lunch did. It was close to 55 minutes for us to receive our dinner. Fortunately there were plenty of chips and salsa to hold us off but people were very hungry waiting on food.

Once we received our food everybody was ready to grub. 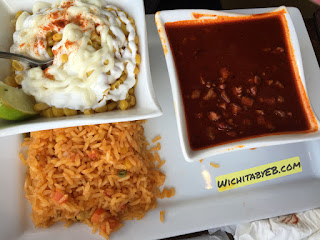 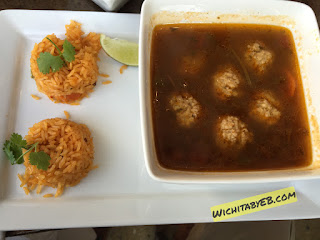 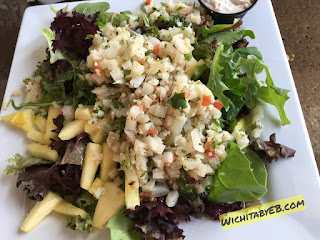 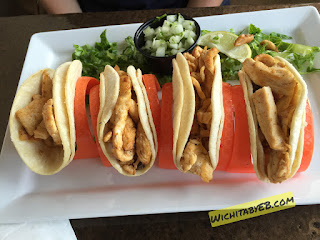 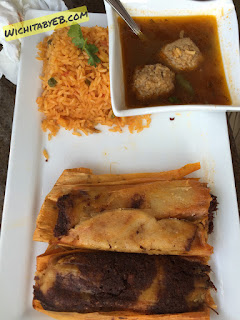 The opinions on the food really varied all over the spectrum. I thought the Albondigas soup was for the most party tasty. The broth was slightly above average with flavor but the meatballs inside were top notch. I didn’t get much in the way of rice compared to the other meals, or at least my stomach didn’t think so. It would be something I’d consider ordering again if I was in the mood for soup. I’ll probably try one of their different soups in the future though before this for comparison.

Jason liked his tamales. He couldn’t recall if he’s ever ordered them in a restaurant before. He mentioned they could have been a little spicier for his preference.

Emily thought her Chile Colorado was delicious. She was quick to note that the side of corn in the cream was very good.

David liked the flavors of his salad. The cauliflower ceviche had no seafood in case that wasn’t clear. While Lisa’s a big fan of street tacos, she felt Molino’s were just ok. There weren’t any spices or seasoning on her chicken tacos. She said she probably should have tried the pork tacos because that is what she normally gets at other places. Lisa also thought it was weird there were bits of steak in her chicken tacos…..probably mixed up from being cooked on the same grill she supposed. The toppings were chopped onions, cilantro, and lettuce. Again it was all fine, she had to add salsa to spice it up similar to how I felt about the Gorditas.

Everybody agreed the service and the kitchen were slow. It did look to get busy as the afternoon went on close to dinner time but for everything we ordered it didn’t seem like it would take long to make or prepare. It was over an hour and a half from the moment we were seated to the moment we left.

Tabbing out this time went more smoothly than lunch time. The only exception was David being charged full price for his margarita instead of the $2.99 sale price. Emily had no problems with it. David’s server said she wasn’t told there was a $2.99 special going on.

Gauging everybody’s opinions that joined me over lunch and dinner, there were some hits and there were some misses. Everybody thought the salsa was delicious and everybody would give it another shot. Like many restaurants, it comes down to ordering the right thing which sometimes doesn’t happen on the first visit. There were no concerns about the actual quality of food, it all came down to preference on what each person liked food wise.

The food times, I’m sure, are a work in progress. Most of the issues we had at Molino’s are all fixable issues regarding service times, communication among the employees and just general awareness of the customers.

It was conclusive that everybody wants to see the new Molino’s succeed. We don’t have many options for authentic Mexican food on that side of town so it’d be nice if it stayed. Plus having a full service bar and a patio is just a plus.

We wish Molino’s the best of luck getting through the kinks of opening a new restaurant. I’m sure I’ll be going again……just not twice in the same day again!

Thanks to Emily and Jason for joining me for dinner and David and Lisa who are first time joint reviewers on the blog!