When it comes to Il Vicino, I usually only stick to pizzas. Like many people who frequent the place, I stick mainly to the wood oven pizzas. Occasionally, I’ll order a salad but did you know there’s a world beyond the pizzas? It’s a whole side of the menu I’m sure many of you haven’t tried out before. When I reviewed Il Vicino (here back in 2014), I only touched upon the salad and pizzas.

While having success at other restaurants and their sandwiches, I thought it’d be fun to try a restaurant with a menu of sandwiches and try all of them out. I called up some family members and asked them if they would be game to go to a restaurant and try every single sandwich on the menu…… cause that’s what all families do right?

Il Vicino has seven sandwiches on their menu. They have three paninis and four flat bread sandwiches. 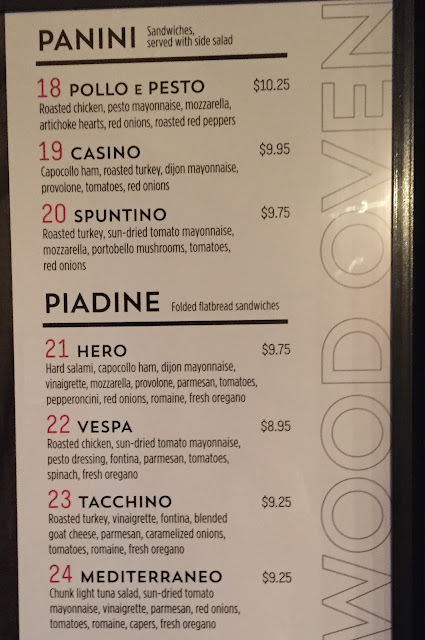 On my family adventure to eat seven sandwiches, I was joined by my sister-in-law, my cousin and her daughter. We ordered all seven sandwiches and cut them up so everybody got a portion of each sandwich. This was their first time ever trying the sandwiches at Il Vicino so this was a new experience for them. 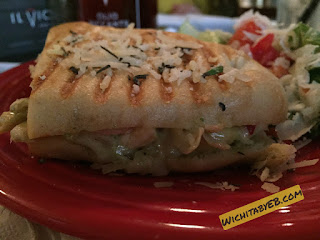 Wow. Of the three paninis, this was probably the favorite from everybody. The dijon mayonnaise gave this a nice little bite and kick to it. While my cousin thought it was spicy, my sister-in-law and I thought it had a kick but definitely not to the point where it’s too spicy. The more I think about it and type this all out, the more I really liked this panini. My sister-in-law commented on how good the capocollo ham was and adding in the roasted turkey gave it more flavor than it already had. This was truly a sandwich we would all consider ordering again. 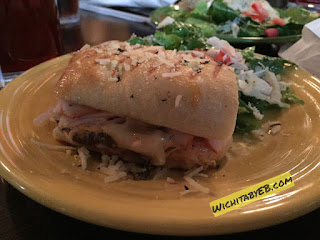 If you like portobello mushrooms, you will like the Spuntino. The mushrooms overpowered the entire Panini and was the main thing you could taste. I liked the roasted turkey as did everyone else but the sun-dried tomato mayonnaise and portobello mushrooms wasn’t to our preference.

Of the three panini’s, the Casino was far and away our favorite followed by the Pollo E Pesto then the Spuntino. 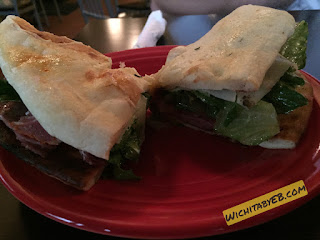 This was far and away the favorite item that everybody tried; even my cousin’s daughter loved it. Everybody liked the capocollo ham from the Casino Panini and this was no different. On top of the ham, the salami was really good as noted by all. Add in the dijon mayonnaise, the always delicious vinaigrette, fresh oregano……it was just all sorts of great flavors added into one. My cousin and sister-in-law said they would definitely get this again the next time they go. 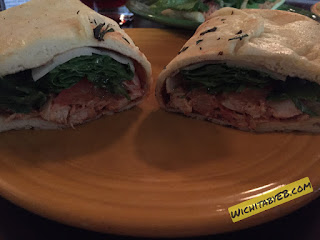 Do you like chicken salad sandwiches? To us, this is the closest thing they had that tasted like one. This was a really good sandwich, one that my sister-in-law mentioned she would want to order again and me as well. The roasted chicken with the pesto dressing similar to the Pollo E Pesto is top notch. It’s the only one of two sandwiches offered at Il Vicino with the roasted chicken. 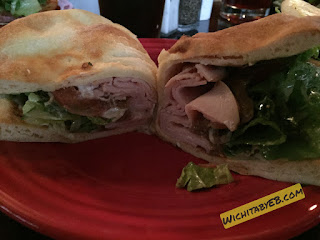 Any goat cheese fans out there? Try the Tacchino. For our preferences, we all weren’t goat cheese fans and that taste really stuck out along with the caramelized onions which I happen to love to add on Il Vicino pizzas. I did like the turkey and would be tempted to order this without the blended goat cheese next time. 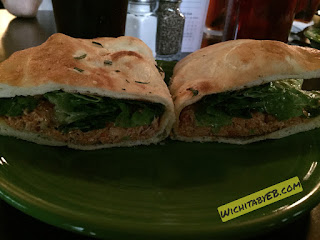 This was the favorite of my cousin’s daughter. She’s a big fan of tuna and was one of the few sandwiches she finished which having a four year old finish any sandwich is a big accomplishment alone. I loved this sandwich as well. I too love a good tuna sandwich and this is one of the best I’ve had in a restaurant. This is a sandwich I’m sure to add to my Lent food list.

That’s all seven sandwiches at Il Vicino. Amazingly enough, my cousin’s daughter who doesn’t eat much when out at restaurants ate a bunch of the sandwiches with no fuss.

If you value opinions I’ve had in other blogs, highly recommended sandwiches are the Pollo E Pesto, Casino, Mediterraneo, Vespa and everybody’s favorite at the table, the Hero.

I know as much as the next person that it’s comfortable to order what you’re used to at a restaurant. But there’s a whole world beyond pizzas at Il Vicino in the form of sandwiches. Plenty of great options to choose from there and I’m sure there’s one that each one of you would love.

My cousin and her family frequent Il Vicino often and told me she will for sure be ordering a sandwich on her next visit there.

All sandwiches ordered come with a side salad or if it’s too much food, you can order a half order of the sandwich.

The service is always fantastic there. It’s always wonderful when I go there. If you take a kid, make sure to get a dough ball to play with. Kids really love it.

Otherwise give one of the seven sandwich options a try. If you do, send me a message. I’d love to hear your thoughts on what you tried.