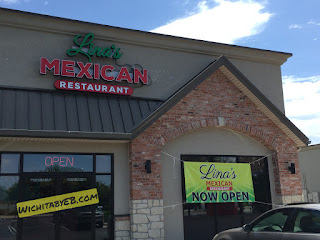 There’s another player in the game when it comes to Mexican restaurants on the Northeast side of town. On Wednesday, July 15, Lina’s Mexican Restaurant opened it’s doors at 3570 N Woodlawn in the space formerly occupied by Walt’s and Smashburger.

After completing the Best Wichita Burger Project, I’m very grateful a third burger spot didn’t attempt to fill the space. Not sure when I’ll be able to eat another burger again.

Little to my knowledge, Lina’s is a regional chain based out of Omaha. While I’m not a fan of many things “Omaha”, I was willing to go into Lina’s with an open mind.

Lina’s other locations are open 24 hours a day but the Wichita based site played it smart to gauge interest and are open from 6 am to Midnight. They feature carryout, dine-in and a drive-thru. Their menu consists of many popular Mexican items, combination platters, and an all day breakfast menu. I have their menu posted at the end of this blog.

For those of you who went to the ill-fated Walts or Smashburger, not much has changed inside. Some of the colors inside stayed the same and they’ve put up a sombrero and a poncho on the wall to give it a Mexican feel if you could say that. But Lina’s is more of a quick service Mexican restaurant so we won’t judge them on appearance. 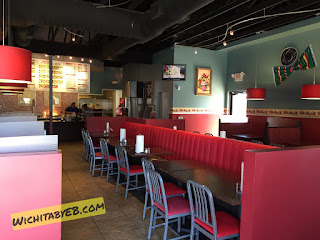 On my first visit, I was on my way home from work and decided to swing in real quick for a bite which turned into multiple bites. Their large menu made it tough for me to narrow down exactly what I wanted. Eventually I ended up on the burrito/enchilada combination plate and ordered a Carne Asada taco on the side.

If you dine in, you get complimentary chips and a selection of salsas from their salsa bar. 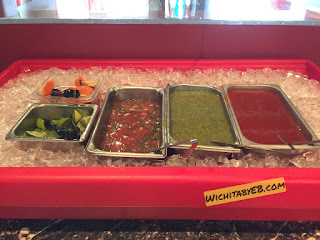 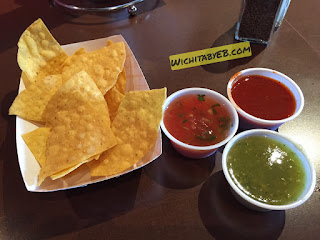 The chips were decent quality. They weren’t very crunch but also not “easily break apart soft” if that could be deemed a proper description for a chip. Of the three salsas, my favorite was the mild green salsa which had a great flavor to it. I ended up using it on almost everything I ate. The hot salsa was fairly spicy although I can see how others would find it too spicy. Overall, I was a fan of the salsa bar.

While I was eating my chips, it probably took less than 10 minutes for my food to come out. 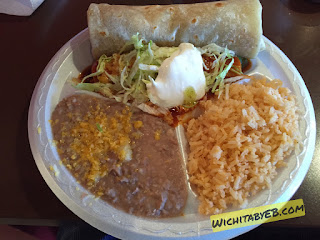 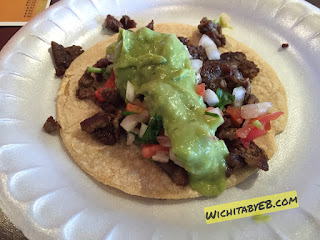 It looks as though most of the items are all prepared ahead of time so whether taste and flavor was lost during that time remained to be determined and I was ready to find out.

The Carne Asada taco was really good. While the meat was a tad on the overcooked side, I still loved the tomatos, onions, peppers, and seasonings all topped with the guacamole. I even added in some of the spicy salsa for additional kick. The taco alone could probably be filling if you ordered a side with it. I was a big fan of it.

Next up on the combination, the beans were more “meh” to me. They just didn’t do it for me and I may have had a couple spoonfuls of them. The rice was nice, nothing special, just fairly basic.

Of the burrito and the enchilada, my favorite of the two was easily the enchilada. I liked the enchilada sauce used on it and the shredded beef was well seasoned. The burrito on the other hand was not my cup of tea. The tortilla was very hard and the plastic utensils supplied with the meal almost broke just cutting into the burrito which seemed to be more tortilla than meat and additional toppings inside. Each bite I took was nearly all tortilla. I ended up throwing half of it away.

Between the tacos, chips and enchilada, I was happy with all those three items. The burrito was a major bummer and something I wouldn’t be ordering again.

My friends and I went a separate day and to give some quick thoughts:

I had the Abodaba Plate and didn’t use any of the tortillas. It was pretty good but nothing special when it came down to it. Both friends who had the Carne Asada Burrito and Taco were pleased with their meals but felt them to be average.

The prices are fair for the combination plates; it’ll run you around $8-9 for one of the plates. The service is VERY quick in my experiences. You can get in and out in 30 minutes easily which makes it a perfect lunch destination if you’re in the area.

While it may give a fast food vibe, Lina’s is a place I’d go to again because it’s quick and convenient. Sometimes you just need that compared to the long sit and wait times others have. The food isn’t beyond spectacular or the most authentic you can get so if you’re ok with that than Lina’s can be a great spot for you. I’d compare it to a Alejandro’s over on South Rock Road. The food is VERY similar.

The service there though is very friendly. They greet you when you walk in and if they aren’t too busy, they’ll thank you for coming as you leave.

Lina’s is probably going to get a lot of mixed reviews from people but it won’t be one of those places someone is going to call the best Mexican food in town. Remember: quick and convenient. Otherwise there’s not much else that Lina’s does that separates themselves from the competition.