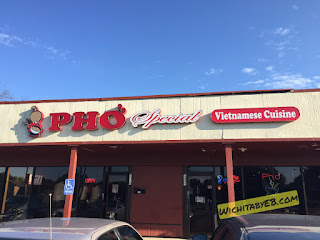 A Pho review in the middle of July? That’s me for you. I can eat Pho in any month. Although many people prefer Pho when it’s rainy and gloomy outside or when it’s cold or when they are hungover or sick, I prefer Pho 365 days a year regardless of the weather. I’m also the same way about Bomb Pops, I don’t just eat them in the summer time….. but Bomb Pops can be saved for a whole other blog.

Pho Special is located at 2409 E Pawnee right by Pawnee and 135. They are open from 9 am to 8 pm everyday of the week except for Mondays. They except credit cards and are one of the view Asian restaurants in town that has a full blown website!

Their website: http://www.phospecial.com/ has the menu posted online with pictures of different items. 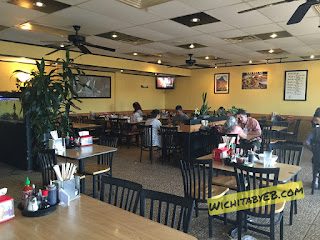 As with any Pho restaurant I go to, I typically order the same meal: a summer/spring roll and a bowl of Pho. My trip to Pho Special was no different.

The Summer Rolls at Pho Special are made fresh; they aren’t pre-made and refrigerated until someone puts in an order. I’ve never understood making summer rolls ahead of time, they really don’t take that much time. I’ve seen my mother and aunt crank out what felt like hundreds in ten minutes. I tried making one once and it took me about three minutes and fell apart immediately…..but that’s also for a whole other blog.

The Summer Roll came out fairly quickly and was served with a side of a peanut butter/hoisin sauce mixture. The difference between this mixture and other restaurants I’ve been to is theirs was heated. At first, I was taken back by it but after trying it, it made sense why they do it. It wasn’t as chunky and spread on to the Summer Rolls more smoothly. I was a fan. I was also a fan of their Summer Rolls. There were generous pieces of pork and shrimp placed in each roll. Definitely one of the better Summer Rolls I’ve had in town. 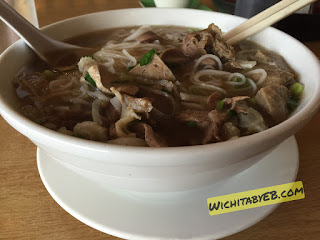 Then there was the Pho. One thing I always do in eating Pho is trying their broth first undoctored by Sriracha and Hoisin Sauce. First spoon slurps (Yes I lack manners occasionally) and felt it was pretty good. Still, I love to add some Hoisin Sauce and Sriracha in my Pho so I just drenched it in. For the record, I ordered a Regular Size Bowl ($7) of their P-1 which included Sirloin, Flank Steak, Brisket, Tendon, Tripe and Meatballs. The tendon and tripe certainly aren’t for everybody but for whatever reason, I’m a fan of the texture of it which many people aren’t.

The Pho had a very generous amount of meat inside in contrast to other reviews I’ve read on this place. The broth was good, I wouldn’t call it great. It tasted much better with other condiments added inside but still a delicious and filling meal.

Would I still go again in the future? Yes. It’s one of the few Pho restaurants on that side of town so compared to others it’s one of the best. I’d still put Pho Hien and My Tho as the best in town but Pho Special is still a good Pho that’s worth trying if you’re in the area of town.

The service was fantastic. Two gentlemen made sure my glass was never empty. I was also watching them serve others and they were always updating tables on when their food would come out; constantly smiling and greeting and thanking customers.

One other thing I noticed is many people came in and ordered Smoothies to go. In the time it took me to finish my meal, I saw probably six different people come in and order one. After reading reviews online, it looks as though many people find them to be delicious. If you’ve ever had one from there, I’d be interested to know your thoughts.