Many bars around Wichita have advertised food specials. They have steak night, burger night, taco tuesdays, but one special I was made aware of I just had to try.

It was for Wednesday night’s at Walt’s Great American Sports Bar and Grill. They have a Wednesday special of Homemade Chicken & Noodles for $7.99. It’s a breast of chicken & egg noodles served over mashed potatoes & buttermilk biscuit.

A couple friends were up at Walt’s one evening and told me about the special. I love me some chicken and noodles so it only made sense I went.

Walt’s Great American Sports Bar and Grill is located at 7732 E Central in Piccadilly Square right at Central and Rock. They are open from 11 am – 2 am everyday but food is only served until 10 pm. You can check out their website for their menu and food specials: http://www.waltsbarandgrill.com/index.html

I saw some other friends while I was up there and they too mentioned they heard that the Chicken and Noodles were great. Oddly enough, everybody I spoke with said that’s what they heard but nobody had actually try it. I didn’t mind being the first since everybody else ordered burgers that night. 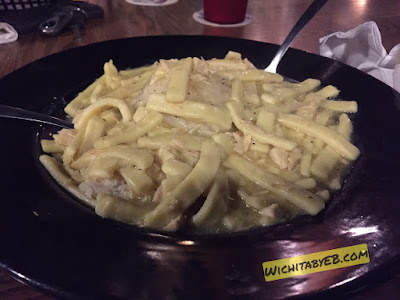 When the bowl of food came out, I was like “Hey, what’s up, hello?” The bowl was a huge monstrosity and the picture doesn’t do it justice. The bowl was probably around a foot long in circumference and enough to feed 17 to 38 people. It really was a heaping portion of food and unlike other places that charge around $8 for a bowl of food and give you a tiny little bowl.

I really like black pepper doused all over my chicken and noodles so I added much more than what is seen in the picture.

Right dead center in the bowl of food was a big healthy scoop of mashed potatoes. It looked very visually appealing and smelled fantastic. But how did it taste?

The noodles were amazing. I’m a huge fan of the thick egg noodles and the noodles included in the meal reminded me of the Reames Noodles found in stores; my favorite. The Chicken and Noodles wasn’t too brothy and there was a very generous amount of chicken cut up in the bowl.

For $7.99, I was very pleased with what I got as would most of  you readers out there. Plus if you’re in the mood for a drink, there’s that option too. The service is great there; I’ve never had an issue there before.

Just make sure you allow yourself time to nap after the meal. It’s that filling.

What to expect at Norm’s Coffee Bar in Newton, KS